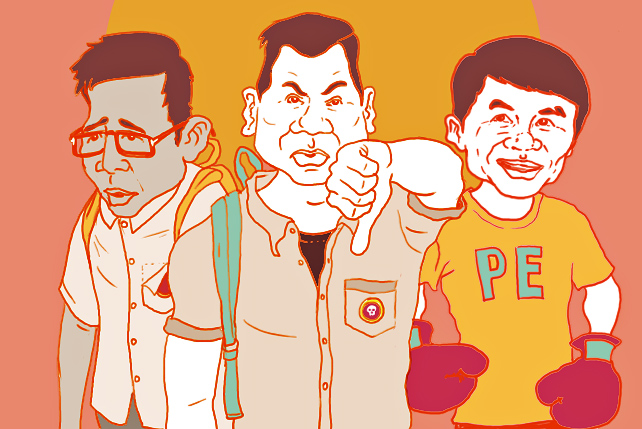 There's The Bully and The Athlete, to begin with. 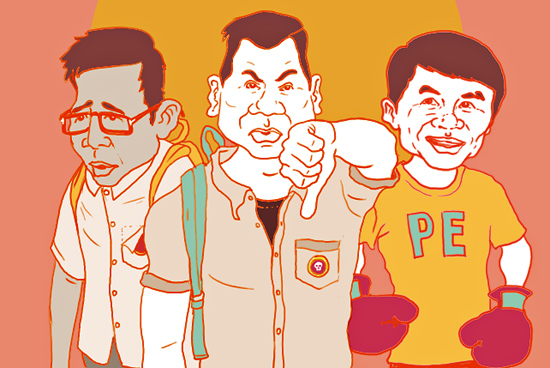 (SPOT.ph) Just like that, it's January and we're only four months away from the national elections. By now we've seen some of the silliest and most outrageous gimmicks from these aspiring do-gooders to get our attention. From immature word wars to statements that beg to be laughed at, some of these candidates' moves are so ridiculously childish, you would think they have the maturity of teenagers. So take your seat and pay attention. Here are 10 kinds of politicians that are just like high school students.

The One Who's Always Asking to Borrow Your Notes

These days, it's so easy for high school students to copy-paste anything from the Internet (as long as they remove the Wikipedia hyperlinks) and submit it as their homework. It's not so easy and forgiving in college, and certainly not in public office. But you know, politicians can't really copy content and not credit their sources for their speeches, can they? They won't even quote bloggers. Because why would they? Blogger lang 'yon.

The One Who Always Has Practice (a.k.a. The Athlete)

At least one person in every class is an athlete. Being fit is all good, especially if you bring prestige to your school, but it's not indicative of one's leadership (and legislative) skills. When they clearly can't do their job well because of their many commitments, then maybe they should just stick to what they're good at.

The One That Everyone Would Rather Avoid (a.k.a. The Bully)

Bullies can be anyone—your cousin, a high school student, even a national leader. You know, those egotistical ones who poke at people’s weak spots to feel stronger, throw insults, and call people names. When you cross them, they will sting you with foul words, then challenge you to a slap fight, then a fist fight, then a gun duel.

The One Who Tries Too Hard

Alternative term: pa-cool. They just want to belong. They will do whatever they think will please you—and fail terribly. Even if they're really rich, they will try to eat rice from a mug to look like they can relate to the masses. They will make friends with all the famous people to appeal across all ages and classes. They'll join the childish feuding if they think it would make them look cool. Heck, they're even more lost than an emo teenager.

Everyone has skeletons in their closets, but this one begs to be different—and not in a good way. They seem decent (because they’re friends with the class president), but they actually host invite-only, wild bashes disguised as ordinary parties. But word gets out, and people talk. Especially when your "birthday present" is a lap dance.

The One Who Makes the Entire School Bus Late

You wake up earlier because the school service picks you up first. But this guy isn't in any rush to help you get to where you need to go, he's just oblivious that way. Because he thinks...hindi naman siguro fatal iyon.

The One Who's Happy Just Being Popular

Admit it or not, high school is one of the shallowest phases of one’s life. The prettiest ones are usually the most popular. And that means people won't necessarily care about whether you know your stuff about issues, they'll vote for you when you decide to run for student council anyway. Because hey, you look (or looked) good in a tanga.

The Treasurer Who Always Asks for "Contributions"

Being in charge of money other than your own is a responsibility some would rather not bear in high school. It’s the opposite in Philippine politics. People are drawn to where the moolah is, and it’s kind of an open secret. Like this person doesn’t seem to tire of finding ways to make you fork over a piece of what you have. Oh, that fancy pencil case? Taxable ‘yan.

The sipsip is someone we all love to hate. They always find ways to defend the system, the programs, everything. They will do or say anything that will put the class president in a good light. Because it's always somebody else's fault.

The usual moves: harana, gifts, and promises of better tomorrows. Don't listen to those who badmouth them for their lack of looks and abundance of wealth. They've been around for a while but they promise to give you what you deserve this time. And because it's ligaw season, they will give you personalized gifts like a mobile phone, sweets, even a rosary—all etched with their names—how sweet! Oh, they have expensive cakes, too!

2016 Elections Ph 2016 Presidential Elections Ph Childish Politicians Funny High School Immature Politicians Politicians
Your Guide to Thriving in This Strange New World
Staying
In? What to watch, what to eat, and where to shop from home
OR
Heading
Out? What you need to know to stay safe when heading out