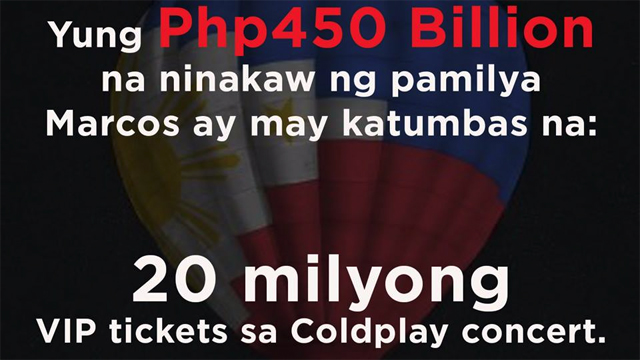 10 Funniest Posts on the Coldplay Concert and Ferdinand Marcos

Trust the Internet to find a connection.

(SPOT.ph) When news broke on Monday night (November 14) that Coldplay is coming to the Philippines in 2017, various reactions—from excitement over the British rock band to sadness because of the ridiculously expensive tickets—spread all over the Internet. The announcement briefly overshadowed another recent event that made a buzz over social media: when the Supreme Court of the Philippines announced on November 8 that it is allowing the burial of former President Ferdinand Marcos at the Libingan ng mga Bayani.

It was only a matter of time before people put two and two together to come up with the funniest but possibly true posts on these two issues.

The Marcos family stole around Php. 450B. In Coldplay tickets, this is equivalent to 128M Bronze tickets. Pwede na manood buong Pilipinas.

Just putting it in context.

Will the Supreme Court allow it?

HUHU IS THIS PUNISHMENT FOR LETTING MARCOS BE BURIED IN LNMB?? pic.twitter.com/yHbieubD8o

The "concert gods" are angry.

But there's a silver lining.

Sure ba kayong may maibebenta pa kayo after selling your soul to 'economic development'?

One soul for one VIP ticket?

Cause you were all yellow...

cause they were all Yellow

A true-blue (or yellow) fan?

Interaksyon.com gave a rundown of the Marcoses loot from public funds in a recent report

Marcos Coldplay Libingan Ng Mga Bayani Supreme Court
Your Guide to Thriving in This Strange New World
Staying
In? What to watch, what to eat, and where to shop from home
OR
Heading
Out? What you need to know to stay safe when heading out