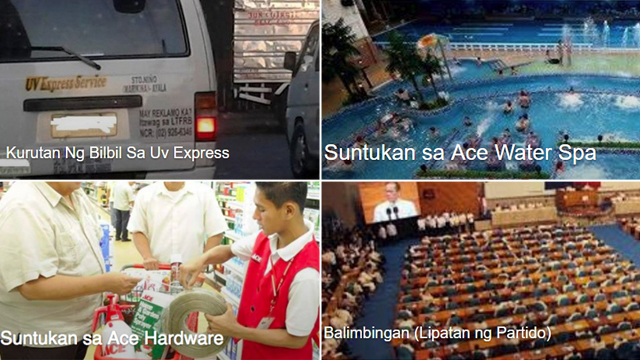 (SPOT.ph) Facebook's Events feature is a gift for planners. It lets you create an online invitation where people can indicate if they're going or not, get updates on changes in venue (if any), and even lets you check who has seen the invite but chooses to ignore your RSVP requests. But since this is the Internet, some people have taken the liberty to use the tool for more creative event invitations which got everyone talking.

We round up the most ridiculous ones that creeped up our feed this 2016—from a sweet "Renewal ng FB Friendship sa Kanto" to a violent "Bardagulan sa BGC." Which ones actually made you click on “Interested” (or, better yet, “Going”)?

One of the first Suntukan spoof events that immediately went viral, Suntukan sa Ace Hardware became so big that it later prompted Ace Hardware Philippines to embrace the unexpected attention and hold a three-day sale around the indicated event date. They didn't appreciate the fictional event at first and even said on Facebook that they "do not encourage this type of digital publicity." But if more than 66,000 people said that they're "going," then might as well take advantage of it, right?

Viewers were quick to notice Chiz Escudero's Balagtasan-worthy intonation at the vice presidential debate, which someone thought merited a Facebook event. It was held at Ace Hardware in SM Lucena, of course. It went on for five hours non-stop!

Surprisingly, one of Hotel Sogo's most recent ad campaigns targets students through an invitation for a group study. "Aral at bonding din pag may time..." is not really what comes to mind when you book a room at this motel. It was only a matter of time before someone made fun of it through a spoof event.

It was one big rambol session in a water spa! What a perfect way to de-stress than let out your anger while enjoying hot herbal pools.

Ever dreamed about meeting your One Great Love in a bookstore in a scene worthy of a movie where both of you pick the same book off the shelf? Well, Landian sa Booksale brought things down a notch with secondhand books, but it's romantic just the same...right?

Where: All 7-Eleven branches nationwide

If you're given a five-minute shopping spree inside a convenience store, what would you get? Probably all the chips and booze!

This is Fight Club, the bilibid version. There's only one rule: Bawal umuwi nang buhay.

Siomais were flying from every direction and attendees brought out their inner baseball player to catch all the dim sum.

It's common fare for this particular Starbucks branch to provide sanctuary for students making kwento or making tambay with their friends while waiting for kuya driver. The café is also a life saver after a very wild Happy Thursday and you need coffee to cure your hangover.

It wasn’t pretty. There were tears! It was just too hard for some to let go of their online gaming addiction.

Tomasinos often need their uniforms as crisp as possible. Good thing there was a big clothes-ironing event so everyone can join in on the fun.

It was the perfect day to let out all frustrations. We wonder who was punched first.

During the presidential campaign, a lot of Facebook friends were unfollowed or, worse, "unfriended" because of differences in opinions (and even values). The post-election renewal of friendship was very much needed. It was a simultaneous event in all kantos.

With the change in administration on June 30, it was crucial for lawmakers to pick a side. This is, after all, Philippine politics.

Now, this is what we call an effective marketing strategy. The PR team behind the widely acclaimed Filipino musical Rak of Aegis used the online trend to promote the theatrical show featuring the songs of Aegis. "Rakrakan na ulit! Laslasan na ito ng vocal cords at palakasan ng diaphragm muscles!" they said in their shoutout.

Where: Senate of the Philippines

Trust the Internet to throw in a sexual innuendo or two. Sen. Richard Gordon's nickname was a meme waiting to happen.

SM Malls finally decided to teach Filipinos about escalator etiquette. It is common knowledge to stand on your right when riding the escalator to make way for people who are in a rush. This, however, seems to be unknown to some people who continue to disregard the rules.

Where: Supreme Court of the Philippines

Special guests were Sen. Leila De Lima, whistleblower Benhur Luy, former Vice President Jejomar Binay, and a lot more. Prior to the event, there were discussions on the best things they can get for free as raffle prizes or even loot bag items. Some of the options were: Kopiko 78C, tuition, and mamahaling kape ng PAGCOR.

Where: University of the Philippines-Diliman

Where: Bank of the Philippine Islands, Julia Vargas, Pasig City

In April 2016, Sen. Antonio Trillanes claimed that President Rodrigo Duterte had P211 million undeclared funds in his account at the Bank of the Philippine Islands-Julia Vargas branch. Then-presidential aspirant denied this but later confirmed that he has a joint account with daughter, Sara. To prove that he's innocent, Duterte agreed to open his account. The "event" was actually attended by supporters of Trillanes and Duterte who shouted at each other in front of the BPI branch.

About 2,500 people were interested with this event. That's not a lot, considering that many are not too wise when it comes to love.

Sitting in the middle row of an FX is probably a commuter's nightmare. The driver tries to fit four people in a seat that's supposedly only for three. It gets worse when the one beside you is not too lightweight.

Remember that "surprise" burial? A lot of people were so angry that they came up with different ways to release their frustrations. This was one of them.

Facebook Event Humor Social Media Ace Hardware Chiz Escudero
Your Guide to Thriving in This Strange New World
Staying
In? What to watch, what to eat, and where to shop from home
OR
Heading
Out? What you need to know to stay safe when heading out