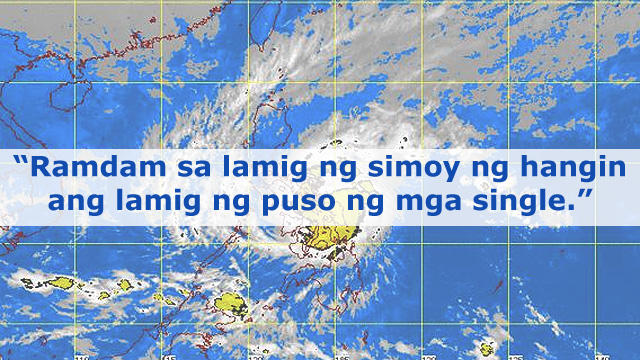 Your ex's love is in the air.

(SPOT.ph) Expect a chilly and damp Valentine's Day, the Philippine Atmospheric Geophysical and Astronomical Services Administration says. The weather bureau reported on Monday, February 13 that cloudy skies with isolated light rains will prevail over the country today. There's also a dip in temperature because of strong northeast monsoon winds. Baguio City, the "Summer Capital of the Philippines," even had its lowest recorded temperature for 2017 at eight degrees Celsius.

Cold? Wet? Valentine's Day? These seem to be ingredients for hugot-filled tweets and posts, and we can only expect the best from the Internet. We round up some that caught our attention.

my ex's love is in the air ata today

It's a cycle, really.

Someone had to point it out.

Just look at all these tweets!

Funny Hugot Tweets Social Media February
Your Guide to Thriving in This Strange New World
Staying
In? What to watch, what to eat, and where to shop from home
OR
Heading
Out? What you need to know to stay safe when heading out