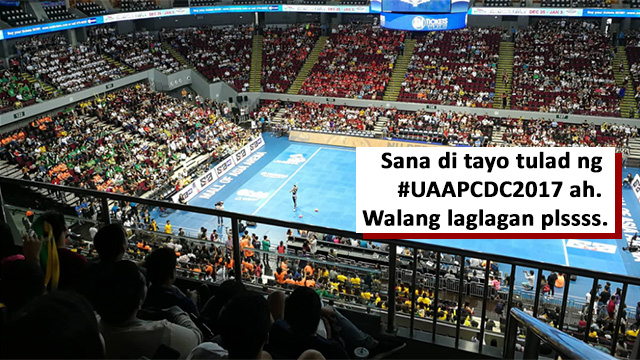 (SPOT.ph) With the University of the Philippines making a big comeback, this year's UAAP Cheerdance Competition is definitely one for the books. Eight universities go head to head in a battle of creativity, choreography, synchronization, finesse, and a whole bunch of other skills that come with the biggest dance event in the Metro.

On the sidelines, it's a game of wit for students, alumni, and fans who are out to make their color proud through funny posts all over the Internet. We round up some of them.

Ooooh, you didn't go there! *snap*

: 'Wag na nating masyadong basagin ang NU. They have proven themselves as a worthy opponent these past few years. Plus, they are happy to serve. #UAAPCDC2017

Breaking: NU Pep Squad has been renamed to

Raise your hand if you got the reference!

Expect the Internet to give us some hugot.

You're the real MVP!

Or a spelling bee?

So about those eyebrows...

We must all learn from UP Pep Squad’s story. When we choose to come back, we must prove how valuable and improved we are. You must work hard to deserve a second chance.

The UP Pep Squad was in character.

If I fall, all should fall. Kuha mo? #UAAPCDC2017 pic.twitter.com/fbOlWDTc0i

We saw a lot of failed stunts this year. :(