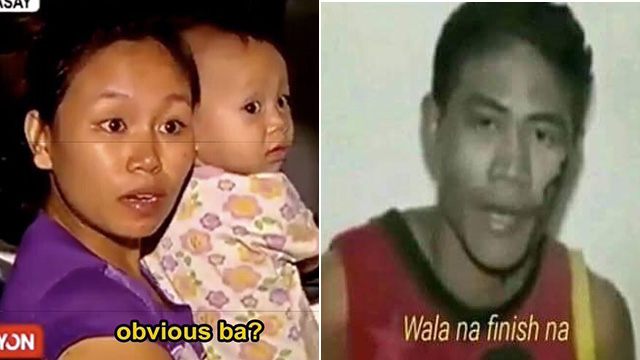 No Joke: These Hilarious Memes and Catchphrases Are Based on Real News

We're sure you've seen them on your feed.

(SPOT.ph) There has been no shortage of local memes based on news reports in the past few years, and we're not sure if that means we've all just decided to consider everything a joke. But it's no wonder these quips have gone viral—they capture the absurdity of daily Filipino life while managing to be relatable. Here are a few of the most notable ones.

This news clip blessed us with two new catchphrases to use whenever an annoying situation calls for it: "Obvious ba?" and "Bakit ka nang-iistorbo ng tulog?" But it all began when a groggy mother and her baby mistakenly boarded a private van and then refused to get off, even when the news crew got there.

This quip is a go-to for when you need to convince others that you know what you're doing, and we use it today thanks to a call-center agent who was busted for selling marijuana.

This phrase, which works in a variety of situations like asking your crush out or asking your boss for a raise, originated from an inebriated man who threatened to shoot Pres. Duterte. (Imagine having the balls to say that on-cam.)

Anyone who has siblings knows how hard it is to get along with them sometimes. One wild example? This news report, where a cell phone snatcher tearfully curses at his brother for betraying him and turning him in to the police.

This news clip shows the story of a friendly squabble gone awry, with one man attempting to strike his friend with a bolo (and failing to do so). You'll be strangely charmed by this strange reconciliation between friends, and equipped with a gem of a catchphrase to use when you barely manage to avoid disaster.

This meme that's gone viral again recently has some pretty dark origins, as it first came from a news report about a drunk, bleeding man who admitted on camera that one of his hobbies while drunk is to...rape. (Welp.)