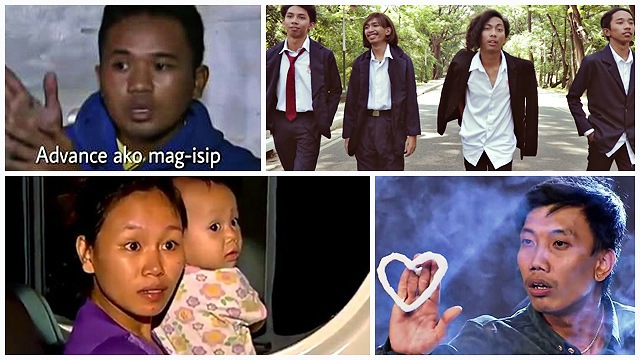 (SPOT.ph) One reason to love the Internet: Videos that make you LOL. Filipinos love getting their fair share of entertainment right from their feeds, so it's hard to keep track of everything that's happening. But we kept our eyes peeled for the funniest ones of the bunch and list down the ones you should have seen—and shared with your friends—by now. From hilarious parodies to "hard to believe it actually happened" moments, here are 10 viral videos that are sure to give you some laughs.

The Meteor Garden craze has been heating up lately, so it’s no surprise that this trailer parody of the show was a huge hit among fans of the original Taiwanese drama. From the music to the slow-mo walking montage and all the way to the dramatic romance gestures, this parody vid might leave you wishing if an Pinoy remake of the drama was coming soon. The star of the 2018 reboot of the show, Dylan Wang, even took notice of the video and funnily commented that "F4 looks the same."

How many demos of salespeople can actually make you stop and watch when you’re strolling through the department store? No matter what your answer is, we’re sure this sassy (and very talented!) salesman over at SM Lipa made waves with this sensational luggage demo—complete with a split! You’ll want to buy a new maleta just because of his performance.

When the "advance ako mag-isip" memes first came out, it seemed pretty hard to believe that it came right from the news. But alas, it did, as a call-center agent got caught selling marijuana. When he was asked why he did it, he talked about how he saw the future of the country, and had this unforgettable quote to say—somehow, it makes things even funnier.

Alongside the "advance ako mag-isip" memes came the ones starring Ate Obvious Ba. In the original news report, the girl was caught on camera asleep in a van when one of the reporters comes up to her to ask her why she was there since it was a private vehicle. "Bakit nang-iistorbo ka ng tulog?" she asks, to which the reporter replies, "Tulog ka ba?" And thus, "Obvious ba?" was born.

Sometimes, in the heat of the moment, you just want to reenact stories. And that’s exactly what happened to this woman being interviewed on this TV5 news program. As she accuses an attacker of strangling her daughter, she doesn’t hesitate to show everyone on television exactly how it was done. Heads up: Watch until the end for an encore.

When a foreign man doesn’t enjoy a good, meaty lechon as much as he ought to, his Filipino girlfriend has a few good words to say to him. This segment from Kapuso Mo, Jessica Soho went viral when the girl’s pronunciation skills didn’t quite deliver the right message. Still, you're probably going to side with her with this one when you watch the full episode.

This couple had a very interesting take for their Save the Date video—and it was pretty meta and hilarious all at once. They showcase all the struggles a couple in love might face when shooting for this special video, from writing the perfect script and even lacking permits to shoot at their special places. You might just have a new peg for your own pre-nup video.

Nobody disses the Queen of All Media or her family—well at least, that's what Mocha Uson recently had to learn after starting a war with Kris Aquino on social media. The issue had to do with Duterte kissing an Overseas Filipino Worker during his South Korea visit and Uson comparing the act with a Ninoy Aquino fan stealing a kiss on his cheek. One of the highlights of Aquino's livestreamed video reply is her referencing Four Sisters and a Wedding, suggesting she and Uson reenact the unforgettable scene where Uson’s character is dragged out by Angel Locsin.

A Kuya’s advice to his little sister’s suitor

Bring on the LOLs with this video of an older brother finding an envelope and letter addressed to his 12-year-old sister. The envelope reads, “FOR BaBy Loy[sic] onLy,” and what follows is his hilarious advice (and writing lessons) to the young lovebird.

Things got crazy weird during a certain Mr. Joven Olvido’s audition on the reality talent competition show, Pilipinas Got Talent. For one thing, Olvido's interview phase with Vice Ganda was its own spectacle to behold, and even as the rest of his audition went on, the banter and quips didn’t stop, much to the delight of the entire audience. Maybe he should have auditioned as an improv comic instead?

Mocha Uson Viral Videos Kris Aquino
Your Guide to Thriving in This Strange New World
Staying
In? What to watch, what to eat, and where to shop from home
OR
Heading
Out? What you need to know to stay safe when heading out