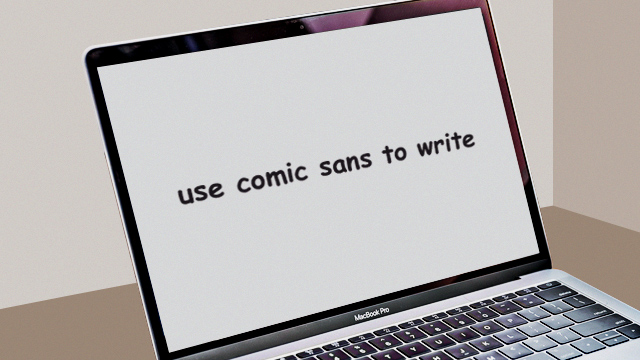 The Font You Love to Hate Might Actually Save You

Y'all know which font we're talking about.

(SPOT.ph) 2018 is coming to an end and the new year is looking to be a promising one for, well, the font Comic Sans. You know this font, of course, and you probably cringe whenever you see it being used. There's just something about the way the letters look that doesn't sit right with a lot of people, but for reasons only the universe can understand, Twitter users are saying using Comic Sans is actually boosting their productivity—and it might just be true.

The "Comic Sans magic" is getting reactions that's equal parts awestruck and confused. It's particularly popular among aspiring writers who saw the original tweet about the claim. Skeptical about the font and its effectivity (because, really, Comic Sans?), people who have been struggling with their writing tried it and got surprising results.

hey how dare this comic sans trick actually WORK, how DARE IT

The image in this tweet suggests that writers looking to improve their speed while drafting should switch from their preferred font to Comic Sans.

I regret to inform you all that, having just tried this, it fucking works https://t.co/GqYFT2skeN

y’all remember the whole “writing in comic sans sparks creativity” thing ?? it fucking works i wrote all that in probably twenty minutes pic.twitter.com/0fEzV1q6j5

The Comic Sans myth is true and pure sorcery ???? pic.twitter.com/1BneuyMOAr

What other explanation could there be?

i've been refusing to talk about this but the comic sans thing... it works. i wrote 6.3k last night in one go. an entire fic. in one go.

The only thing more impressive than writing 6,300 words in Comic Sans is the fact that they lived to tell the tale.

u know that post about how writing in comic sans immediately improves your writing quality & productivity by 500%? it works. it fucking works. i’m writing better sentences, and more of them. i’m noticing the microclichés and writing circles around them. this is black magick

The only plausible explanation.

It's hard to tell whether there's real science behind the success or not. There is, after all, a 2010 study from Princeton University that claims it's easier to retain information if they're written in hard-to-read fonts like Comic Sans. Or maybe it's the placebo effect and just that.

In any case, we found a Tweet we're sure you can relate to right now:

I'm still completely horrified by the concept. And yet tempted. pic.twitter.com/m1tCYa8FLC