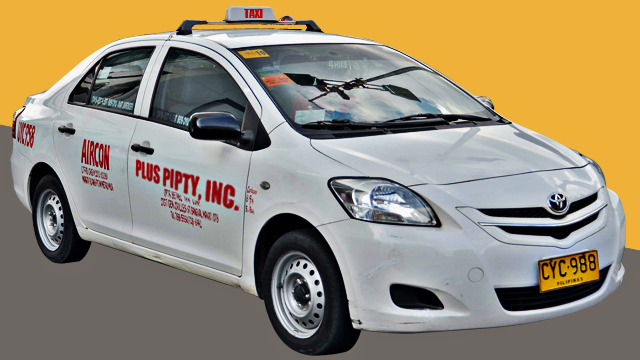 Good or bad, at least it's always an adventure.

(SPOT.ph) You want to know the true character of the person you're dating? Then commute together; preferably at 7 a.m. on a typical Monday. Nothing like a high-stakes, high-pressure experience to really let their true colors shine through, especially in a city like our beloved Metro Manila. Sure, public transport is endlessly being improved (or so they say), but in an area that's always full of people trying to get somewhere, our options are limited. One mainstay, though, is the taxi. Love them or hate them, taxis are here to stay, as the Land Transportation and Franchising Regulatory Board recently opened up more taxi franchise slots. News that, inevitably, stirred up a lot of feelings.

We didn't want our commenter's creativity to go to waste though, and tbh, we could totally see those names happening. So we decided to honor the um, uniqueness, of riding taxis in the Metro by making their imaginary franchises a reality! At least, in virtual reality. Plus, we decided to round up a few struggles that prove adventure is right around the corner: in the form of a Metro Manila taxi.

Here are 10 situations that make every taxi ride an adventure:

Actually trying to flag down a taxi

We've all gone through this. For some reason, whenever you don't need a taxi, they're everywhere, but the moment you need one, it's like they've all decided to vanish together in the world's most annoying magic trick.

If you're a law-abiding citizen unwilling to get off the curb and onto the actual road just to hail a taxi, then you've definitely endured some crazy long lines to get one. Malls—especially those on sale—are notorious for this, but when your only two choices are to wait or pay for a ride-sharing app with fees at sky-high surge, we understand why you'd be willing to endure.

Having to fight off other commuters looking for a taxi

If you're not in line, then that means it's a free-for-all. You could almost hear the late great Steve Irwin narrating the battle between you and your fellow commuters for the next taxi that comes by.

Thankfully, it doesn't always happen, but the fact that it does is still ridiculous. You try all possible negotiations with a taxi driver, and on the off-chance that you win, you end up having to deal with his surliness the entire ride through.

Having contracted rates on a meter taxi

We all know this one. Whether or not you believe in tipping, some taxi drivers don't give you a choice. Some flat out ask you for an added fee before you get in, giving you a chance to escape, while others drop the demand halfway through the ride, leaving you in a real awkward mess.

A brand-new taxi is like a rare Pokémon; the chances of you getting one are, well, rare. Most of the time, the seats are kind of caved in from years of use, the headrests have been put in haphazardly, and the engine sounds like it's holding on to its last few breaths. Bonus points if you spot a cockroach crawling on the door.

Kudos to taxi drivers for knowing the streets of Manila better than the backs of their hands, and also for proving just how fast a speeding vehicle can get from point A to point B. Taxi drivers have a penchant for speeding through almost any kind of traffic, and using roads that you could swear you didn't even know existed, to get you to nearly any point in the city.

Riding in a taxi with some serious interior design

Taxis are great because you never know what to expect. Once in a while, you end up in a taxi packed with the driver's personality: from plastic bottles cut up like plants on the dashboard, multiple religious items hanging around, some plush mats—the kind usually reserved for bathrooms—on the floor, plus some intense air freshener, these taxis are always a fun surprise.

Getting a taxi driver with real personality

This is probably the most exciting part of riding a taxi in the Metro: getting a driver who has some stories to tell. While some taxi drivers are silent, there are others who are just itching for someone to talk to, and you, well you're captive audience for however long the traffic lasts—which is usually a while.

Having some life-changing experiences

Look, it may sound like an overreaction, but taxi drivers are probably the most human people you'll ever be able to interact with. Most of them have been plying the Metro's roads since before you even started commuting, and they've seen a lot. While you might not always agree with the (sometimes crazy) things they have to say, or do, it's always great to just see, and maybe vicariously experience, a different worldview.