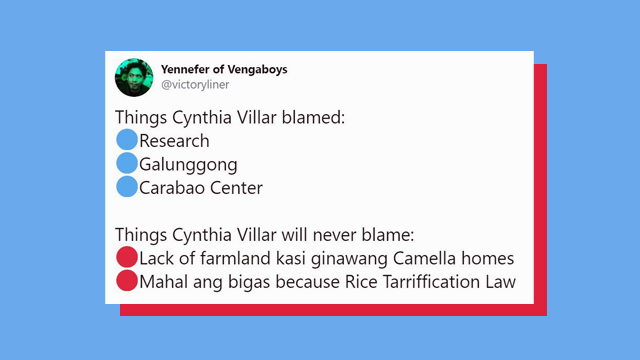 Will Milk Solve All of Our Problems? Twitter Doesn't Seem to Think So

(SPOT.ph) First it was research, then galunggong, and now, milk. It may seem like the oddest options for a multiple choice question, but Senator Cynthia Villar has managed to answer "D. All of the Above" to the question "What controversial discussions have you set off?"

This latest comment was prompted by an unnamed official of the Philippine Carabao Center on Monday, January 27, who allegedly wanted to allocate more funds towards purchasing new vehicles. "Itong [Philippine Carabao Center (PCC)], ibibili daw niya ng sasakyan para inspeksyunin ang dairy farm," said Villar, as quoted in a report by ABS-CBN News. The PCC, an agency under the Department of Agriculture, is mandated to push for the "Carabao as a source of milk, meat, draft power and hide to benefit the rural farmers," according to their site.

Needless to say, people online did their best to understand the leap between milk and intelligence, while several lactose-intolerant folks felt directly attacked. We can't deny the link between malnutrition and education, but we do wish Villar's arguments would make just a little bit more sense—and ideally have a bit more substance. Whether it was the language, the logic, the statement in general—or even the senator in general—something about Villar's latest comment definitely left a few people confused, and some, just plain angry. From rare insults to arguments, we round up a few of the best retorts we saw:

Maybe if we drink enough milk, all of the nation's problems will go away.

Petition to leave the carabao alone.

What was the point of her argument again?

Not sure we're familiar with this Harry Potter sequel.

Look at this long list of things we have to think about.

Think we can ask for a bibliography?

3. Gestures vaguely at everything in general.