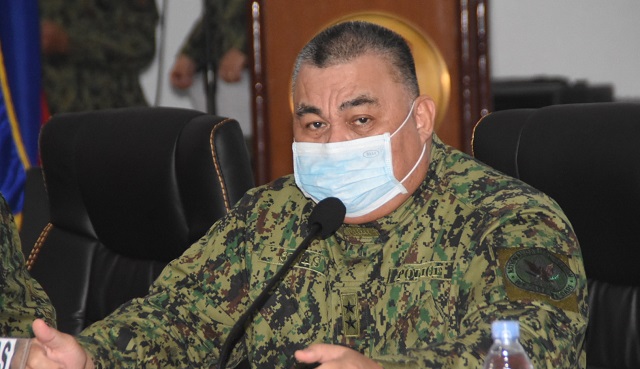 If Debold Sinas Can Bounce Back Then So Can You

A lesson in blinding self-love, courtesy of our NCRPO Chief.

(SPOT.ph) This crisis has hit us all with hard times—some more than others, some a lot less than others. Major General Debold Sinas, chief of the National Capital Region Police Office and May 8 birthday boy, has picked himself up following the controversy of his little "mañanita" celebration; in a move the rest of us simple Metro Manila folk could only dream of following. So in the midst of all this uncertainty, it seems we can, at the very least, look to Sinas for lessons on how to love oneself—to the point of being absolutely blind.

"Low morale, siyempre nandiyan 'yan. But I recovered and I show sa mga tao ko na that's part of the game, that's part of leadership," the police chief told GMA News. Sinas was back to work on Monday, May 18, inspecting Metro Manila malls after the imposition of lowered restrictions under a modified enhanced community quarantine. The man currently has a criminal charge filed against him by the Philippine National Police's Internal Affairs Service.

The complaint was filed on May 15 against Sinas and 18 subordinates for having had a birthday celebration despite strict social distancing rules. The police chief has kept his post, though, since he is apparently "hard to replace," said General Archie Gamboa, Philippine National Police (PNP) chief. "I hope public would understand [sic]. Kasi nandito tayo sa ganito nga, emergency situation. Pag palitan mo siya, we will never know. Napakahirap palitan dahil ang dami niyang programa [...] in relation sa [COVID-19]," Gamboa was quoted by Inquirer.net.

There must be a lesson in here somewhere—but all we're getting is that if a person who is supposed to be our leader can go against the rules they themselves are supposed to enforce, and then act as if nothing is wrong (despite international backlash and a criminal case), then you definitely can, too. Just take inspiration from how Sinas did it.

Having a hard time adjusting workwise to a new office system? Power through it like he did. Can't get to the grocery store in time to get essentials? Redefine an old term to fit your needs. And in the spirit of motivation, we round up a couple of our favorite go-to sayings courtesy of @unspirational—but first let's start with Sinas: "I still have the authority to serve," he told GMA News. "As long as the Chief PNP, the President believe in my ability to lead [National Capital Region Police Office (NCRPO)], and my people themselves believe na I can lead them properly." Yup, you best believe.