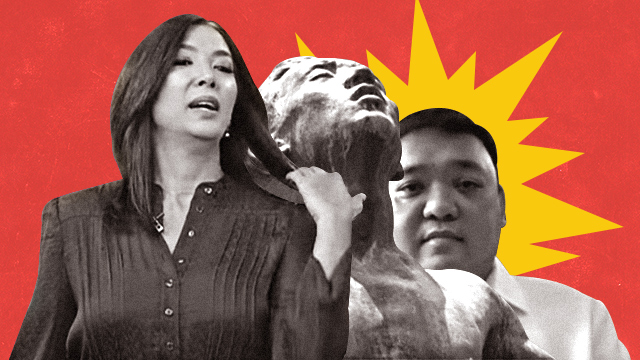 (SPOT.ph) A lot of things can go wrong during a live interview—but it seems it will take much more to throw off journalist Pinky Webb. And if you're wondering why the veteran journalist is trending on Twitter as of writing, it has to do with her interview with Harry Roque, presidential spokesperson, on CNN Philippines about the recent abrogation of the time-honored UP-DND accord. In case you somehow missed the interview, you can check out a part of it below:

The exchange happened on CNN Philippines' The Source, which went live on January 20. Webb asked Roque about a challenge tweeted by University of the Philippines journalism professor Danilo Arao. The challenge? For University of the Philippines (UP) alumni in the current administration to denounce the unilateral termination of the accord by the Department of National Defense. "Where is your honor and excellence?" wrote Arao.

In The Source, Webb asked for Roque's reaction to the challenge, to which Roque responded, "I’m asking the DND Secretary and the President of UP to sit down, and I have offered my good offices to facilitate this meeting.” Webb pressed on, "Dine-denounce niyo ho ba ito? We're not speaking as a presidential spokesperson," to which Roque replied that there is "really no such thing when you are a presidential spokesperson." "All I’m saying is let’s talk about this, I support the steps of the UP President, and let’s see why a 30-year-old accord should not be continued when it has worked, apparently perfectly well, in the past 30 years," he continued.

After the break, Webb proceeded to ask a question about Duterte Youth partylist, which was seeking for the PUP-DND to be scrapped as well. "It's a free country; if that is the thought of the Duterte Youth, so be it, and that is something that the presidential spokesperson doesn't have to be involved with," he said, then added: "I have to highlight the fact that I think the question on Arao was unfair. In the first place, why am I duty-bound to follow anything that Professor Arao says?" "You made it appear as if it's compulsary for me to follow him," adding that he spent more time in UP and that he is a more senior academic than Arao.

Webb then clarified that she wasn't saying that Roque is duty-bound, and that it was just a tweet—"a tweet that I read and I asked for your reaction if you would denounce it." Roque cut her off, saying, "It’s implying that I should follow what Danny Arao says."

"And where is the basis? Tell your viewers now. Where is the basis that I should follow what Danny Arao says? It’s not just you asking for a reaction, you were pursuing, 'Will you denounce?'" he continued.

The situation wasn't anything that Webb couldn't handle. "I am trying to be fair, Secretary Roque," Webb stated, then proceeded to do a perfectly poised hair flip as she diffused the situation. Roque cut her off, again, to say that the questioning made him feel that "if I don't agree with Arao, then I have no sense of excellence or honor."

Unsurprisingly, her handling of the situation, and more importantly, the hair flip, have pretty much taken over social media.

We know it's only January, but is it really too early to call the GIF of the year? This isn't even the first time Webb has had to deal with a testy presidential spokesperson. Yup, we're throwing it way back to the start of the quarantine—which is, BTW, nearing a one-year anniversary, but we digress—on March 16, 2020.

Webb was clarifying with Salvador Panelo, then presidential spokesperson, how the large-scale quarantine would work. It was when Webb began asking for a definite time when the nation could expect to hear from the President that the line was suddenly cut. So we can't really say for sure what happened there, but that's our best guess. Anyway, if you need us, we'll be out here scouring online shops to see where we can buy even a little bit of Webb's composure.

Adventurer Savvy Pinky Webb Harry Roque Humor Salvador Panelo Twitter Trending Viral
Your Guide to Thriving in This Strange New World
Staying
In? What to watch, what to eat, and where to shop from home
OR
Heading
Out? What you need to know to stay safe when heading out