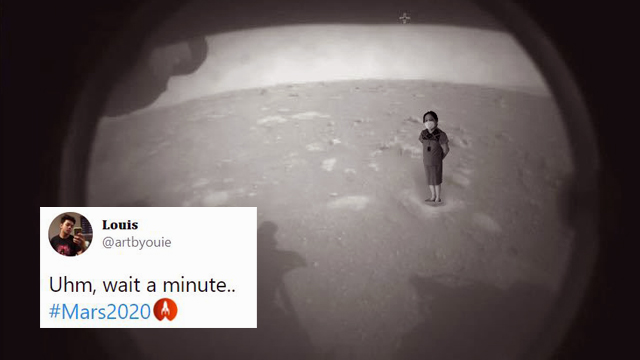 (SPOT.ph) Perseverance has touched down on the Red Planet. After launching on July 30, 2020, the largest and most advanced rover of National Aeronautics and Space Administration yet landed on Mars on February 19, 2021—and the Internet is celebrating in the best way it possibly can: with memes, lots of it.

Before we get into that though, let's discuss what the Mars 2020 mission is all about. Nope, the world's best didn't work for years to bring a car-sized rover all the way to Mars just for us to have quality meme content (that's really just an added benefit). Perseverance is tasked with a two-year investigation of Mars's Jezero Crater. Its goal? The Mars Sample Return Campaign, which will allow scientists to study samples collected by the rover for definitive signs of past life.

"Because of today’s exciting events, the first pristine samples from carefully documented locations on another planet are another step closer to being returned to Earth," said Thomas Zurbuchen, National Aeronautics and Space Administration (NASA) associate administrator for science in a statement. "Perseverance is the first step in bringing back rock and regolith from Mars. We don’t know what these pristine samples from Mars will tell us. But what they could tell us is monumental—including that life might have once existed beyond Earth." In short, this sounds like an epic hunt for alien life.

Perseverance has already sent back some of its first looks at its new "forever home" posted on its very own Twitter account! Needless to say, while the rover may just be starting to search for signs of life on the Red Planet, folks back here are having fun imagining all the types of creatures that could be found. Cue the Twitterverse making a bunch of memes.

Check out some of the most hilarious Perseverance memes we've seen!

Kicking things off with the warmest of welcomes!

Time for a new virtual background.

Confirmed: Robert Pattinson is an alien.

And even BTS? No way.

If a subdivision pops up on Mars, you know why.

If the aliens aren't dressed in red spandex then we don't want to be friends.

The Bernie meme will never die out, hopefully.

Adventurer Savvy Mars Nasa National Aeronautics And Space Administration Perseverance Science Humor Memes Staying In
Your Guide to Thriving in This Strange New World
Staying
In? What to watch, what to eat, and where to shop from home
OR
Heading
Out? What you need to know to stay safe when heading out