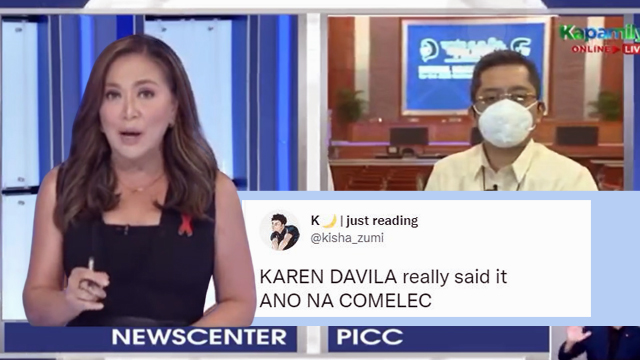 She and Mel Tiangco are the current queens of Twitter.

(SPOT.ph) May 9 voting day has, not surprisingly, gone off with many a hitch—to put it very lightly. As of 7:30 p.m., half an hour after the scheduled end of voting, precincts across the nation are still full with many folks—candidates included—calling for COMELEC to extend votation. And it seems it's not just the general public that's had enough. Veteran journalists Karen Davila and Mel Tiangco are currently trending on Twitter—alongside the #ExtendVotingHoursPH—after they questioned the Commission on Elections and their refusal to put a foot down on whether or not to extend the voting time.

The broadcaster has also taken to her own Twitter account to call for COMELEC to be accountable for today's mishaps.

Mel Tiangco and her coverage of the day's events on GMA have been peppered with commentary on COMELEC and their VCMs—particularly on the poll body's slow response to troubles.

Twitter, meanwhile, has been all over the two reportages—and with the fire the two brought at the height of what was supposed to be the end of voting, it's no surprise. From folks declaring them queens to more calls for COMELEC to step up, check out the spiciest tweets below.

Karen Davila and Mel Tiangco trend on Twitter for COMELEC coverage during May 9 elections: