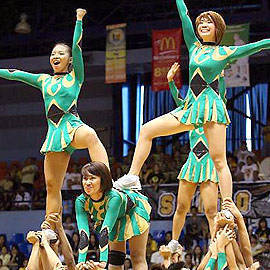 We weigh in on the UAAP Season 73 Cheerdance Competition.

Brace yourself for a heart-stopping afternoon this Sunday, September 12, as cheerleaders strut their stuff in the University Athletics Association of the Philippines (UAAP) Season 73 Cheerdance Competition at the Araneta Coliseum.

Last year’s competition drew a crowd of more than 20,000 paying patrons. The Far Eastern University (FEU) Cheering Squad seized the crown from 2008 champs University of the Philippines (UP) Pep Squad. Will the FEU Cheering Squad win a back-to-back championship, or will one of the other squads budge them from the top?

The competition is definitely tighter this season, as teams of the longstanding cheerdance triumvirate have proven to be beatable. From 2003 to 2008, these three teams dominated the UAAP Cheerdance: the UP Pep Squad, FEU Cheering Squad and University of Santo Tomas’ (UST) Salinggawi Dance Troupe. But in 2009, the Ateneo de Manila University’s (AdMU) Blue Babble Batallion snatched the first runner-up title, ending the six-year unchallenged dominance of the previously mentioned squads while forcing the UST Salinggawi Dance Troupe out of the podium.

So, which team is your favorite? SPOT.ph gives you the lowdown. 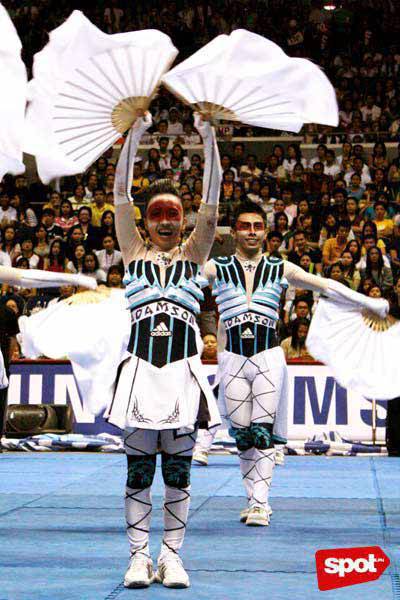 The Adamson Pep Squad seemed to be heading in the right direction since 2006. In last year’s competition, the Adamasun University Pep Squad played it safe--and they paid for it. Monday Galdez, captain of the team, says, "Last year was a struggle because it was the first time we had no choreographer... We had a lot of rookies, and we took time adjusting." But he quickly assures fans, "This year is a lot different; we’re a lot better. You can expect a lot from us."

Their pre-season performances prove Galdez’ claims. Winning second runner-up in the Filoil Cheerleading Competition, they seem better prepared for this year’s competition. What Adamson clearly has to work on is synchronization and the execution of the difficult stunts.

"We’re not hoping to get the championship; we’re known as the underdogs. We’re hoping to get a spot in the top three," Galdez says.

Team strength: Their stunts. (Remember the breathtaking "carousel toss" in 2006?)
Team weakness: While Adamson is able to do difficult stunts and lifts, the team shows lapses in the whole flow of their routine--transitions, choreography, and gymnastics.
What to watch for: Adamson’s new bag of tricks.
SPOT.ph prediction: Highest position - sixth; lowest position - eighth

The Adamson University Pep Squad shows off their new tricks in the 2010 Filoil Cheerleading Competition. 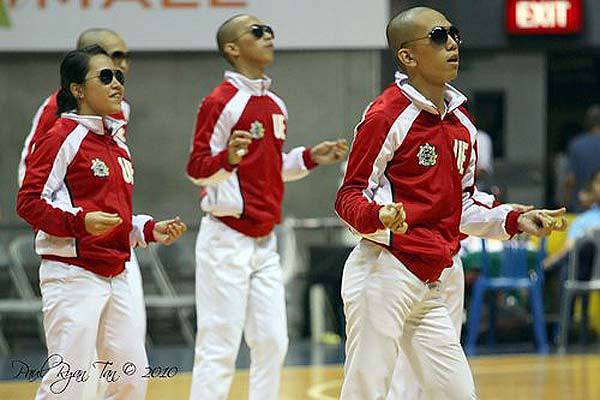 All other squads seem to have dramatically improved their skill sets, while the UE Pep Squad seems to have been left out. Their pyramids have remained low, their stunts are still basic, and their gymnastic prowess needs to be amped up. The squad clearly has to improve dramatically and become more daring if it wants to make it into the upper half. Their 2009 routine seemed to borrow a lot from their 2008 and 2007 routines in terms of stunts and lifts. The team also have to polish their props, themes, and, of course, their costumes. Those too-tight overalls for the men are a little awkward.

Team strength: Crowd support. While students from the cheerdance giants outnumber all other schools put together, the UE crowd’s team spirit in unbeatable.
Team weakness: Overall skills. The squad needs to learn how to make their routine seamless.
What to watch for: Either the UE Pep Squad will rise to the challenge, or they’ll take NU’s former spot at the bottom of the league.
SPOT.ph prediction: Highest position - seventh; lowest position - eighth 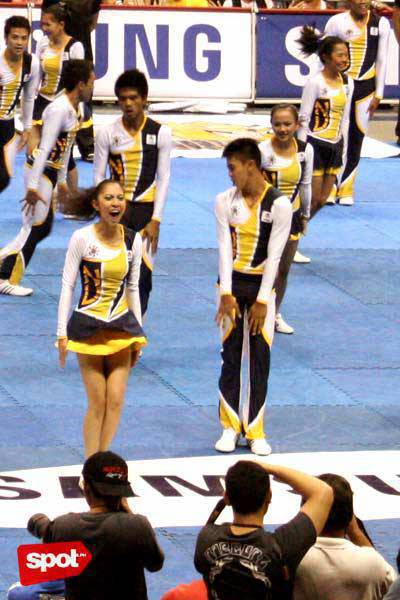 With routines inspired by American cheerleading squads, NU is definitely "bringing it on." The team has drastically improved its skill set, most especially its stunts. The team’s participation in both the National Cheerdance Competition (NCC) and in the Filoil competition are both signs of initiative--all the more reason to expect a better NU Squad.

"We don’t want to be just better... We want to be the best," says NU Pep Coach RJ Cruz. "Our goal is to increase our ranking this year. We’re not expecting to get the top spot, but I always tell the team to visualize being number one."

And yes, the rumors are true. Cruz has confirmed to SPOT.ph that they have international coaches to help them with their routine. "At first, they only helped us in the conditioning. But the management made us consider the idea of a long-term plan."

But it will take more to be part of the UAAP magic three. While the American style of cheerleading present in their music, transition, choreography and overall routine may be cute, NU has to develop a style of its own. And Cruz understands this. "Unlike previous routines, we now have more transitions and visuals. This year, we won’t waste a second; we’ll eliminate dull moments."

Team strength: Synchronization. While their routines are comparably simple, the team's synchronization makes them look polished and prepared.
Team weakness: Predictability. Watching an NU Pep Squad routine for the first time, one can already tell where and when the team will show its big guns.
What to watch for: NU’s superhero-themed performance
SPOT.ph prediction: Highest position - sixth; lowest position - eighth 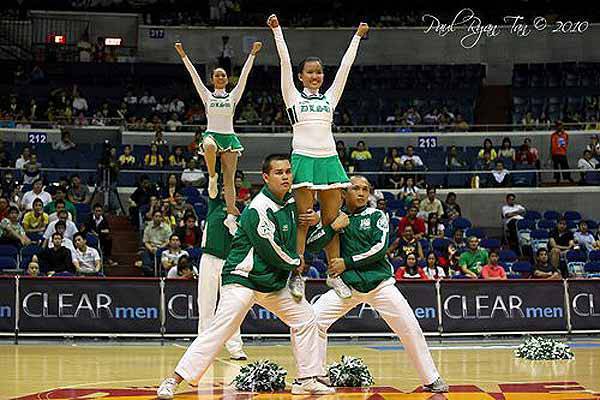 No one could be hungrier for a top three finish than the Animo Squad. Tremendous improvement in pre-season competitions shows their drive. In the NCC they jumped from 14th place in 2008 to fourth place last year. Add to that a first runner-up finish in the Filoil Cheerdance Competition last summer. And the team isn’t holding back--in their halftime performances, the Animo Squad seems to be merely polishing their stunts and lifts, conditioning them for the upcoming competition. With multiple full twists and one-mans in their arsenal, DLSU is this year’s dark horse.

"Since we’ve already shown off what we can do in the NCC, expect elite stunts in the UAAP," Animo Squad head cheerleader Karla Gumabay tells SPOT.ph. "We included visuals. As you might know, the UAAP is more visuals-oriented compared to the technical-oriented NCC... We really improved, and we hope this would change people’s perception of us."

The Animo Squad’s powerful NCC routine that can easily wow any critic.

What’s left for them to work on is their choreography. The team’s themes and props in previous years have also been detrimental to the DLSU squad--the "Al Salle" misspelling in 2007, the lackluster futuristic theme in 2008, and the confusing Mardi Gras routine in 2009.

They finally have the big guns, but will they fire them correctly this time? "We bested other squads in the NCC, what more in the UAAP," Gumabay says.

The Animo Squad was named first runner-up in the Filoil Competition.

Team strength: Stunts. The Animo Squad is equipped to blow us away with their flyers.
Team weakness: Execution. While there is no doubt to the level of skill the Animo Squad has now, they have to make sure that they execute all these stunts and lifts perfectly. In the past, they have experienced multiple falls and errors.
What to watch for: Expect a possible nationalistic routine from La Salle. Gumabay says, "People perceive La Salle students as sosyal and coño, we’ll show everyone we’re also nationalistic."
SPOT.ph prediction: Highest position - second; lowest position - fourth 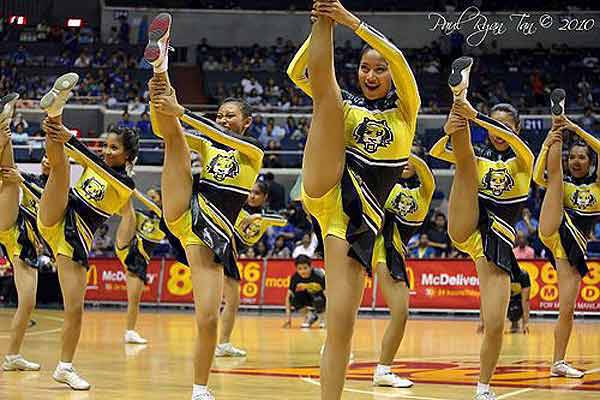 Some say that the UST Salinggawi Dance Troupe is a phoenix--ready to rise again from the ashes. Some say it’s a tiger--set to roar once more. But earlier performances seem to point in the other direction. Thus far, we’ve seen shaky pyramids and problematic.

Camsy Cruz, an officer of the UST Salinggawi shares that their goal for this year is to "uplift the name of UST and Salinggawi." Always humble, never boastful, it is best not to underestimate this squad, because this team never runs out of heart.

Team strength: Choreography. They’ve got rhythm and moves.
Team weakness: Execution. The team has to correct multiple errors.
What to watch for: UST always has some sort of gimmick in their routine; they’ve had wigs and Roman-inspired dances. Expect another gimmick this Sunday.
SPOT.ph prediction: Highest position - second; lowest position - fifth 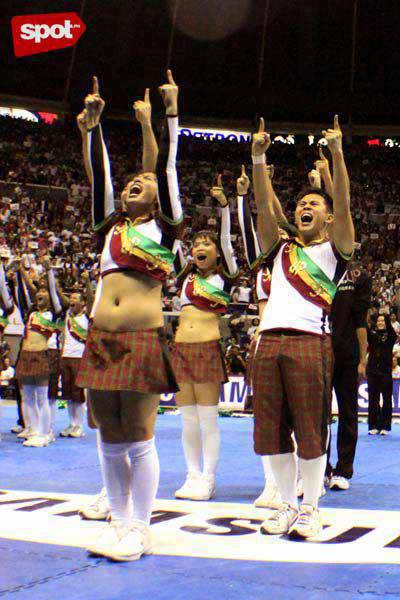 Admit it or not, the UP Pep Squad had the best themed routines in the past few years. The 2007 rock routine had us head banging, the 2008 tribo routine was able to brilliantly meld together culture and cheerdancing, and the 2009 UP life routine showed just how special the State U really is. With jaw-dropping stunts, excellent choreography, and high-level difficulty pyramids, UP is certainly poised to make a comeback. The team should polish its routine more though, as last year’s multiple errors really hurt them.

Team strength: Overall skills. ’Nuff said.
Team weakness: Execution. UP’s biggest competition is itself.
What to watch for: UP weaves themes into their routines effortlessly year after year. Now what will it be this year?
SPOT.ph prediction: Highest position - first; lowest position - third

UP’s halftime performance on the UAAP opening day. Fast forward to 1:06 to see a breathtaking stunt from the 2008 champions. 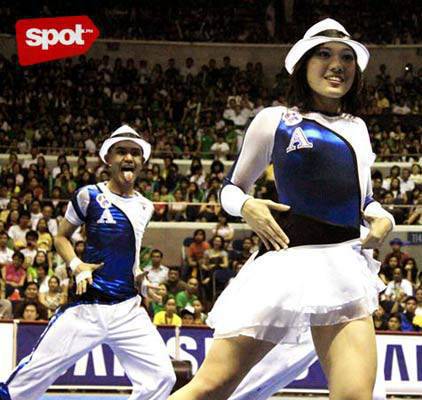 After years of being bridesmaids, the Blue Babble has finally made it to the UAAP Cheerdance top three last year. While getting into the top three is hard, staying there is harder. The squad is prepared to rise-up to the challenge. "We’ve been training since summer," says captain Katsy Lee. "We had gymnastics and dance training with our coach."

So is the squad poised to stay in the top three? "We only lost one member, Captain Sari, from last year’s team," Lee says. "If anything, the team has matured in terms of showmanship. Hopefully, team members now know how to move better in this chaos. We’ve also improved in terms of gymnastics and partner stunts... Expect the story of the Blue Babble to unfold."

Last year’s win has definitely made them more confident. It is evident with how stable their bases are, and how their cheerleaders still have smiles plastered on their faces while they’re being thrown in the air. The only thing left for the team to acquire is more swagger. If the Babble adds that "oomph" in their routine, then they’re all set for another win. 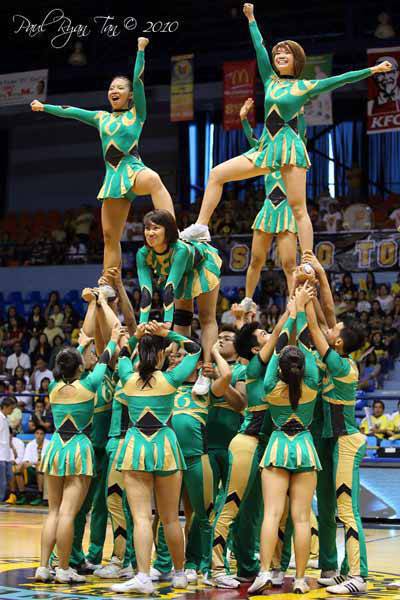 Given what the team has been showing in their halftime performances, last year’s champion team is still intact. They seem to be toughest and most seasoned team this year. One can only marvel at how flexible the girls in this team are. Add to that the variety of stunts that the FEU Cheering Squad can do, who won’t be wary of the Tamaraws?

But they’re not being complacent. FEU choreographer and instructor Jaqueline Alolor even tells Yahoo College Hoops that the team has been rehearsing since summer and that they practice even on Sundays.

However, the team has shown vulnerability. The routine they performed in the first meeting of the Ateneo Blue Eagles and FEU Tamaraws was flawless, but when they performed almost the same routine against the UP Fighting Maroons, and the UP Pep Squad was to follow them, some of the cheerleaders actually made mistakes. Nerves perhaps?

More precise than their stunts, this year’s competition is clearly the FEU Cheering Squad’s to lose.

Team strength: Overall skills. See the halftime performance of the squad for yourself.
Team weakness: Choreography. While the FEU Cheering Squad boasts the toughest stunts and most skilled gymnasts--but sometimes the routine seems stunt-excessive.
What to watch for: Stunts that would have contortionists applauding.
SPOT.ph prediction: Highest position - first; lowest position - second