Tight Shorts and Orange Wigs: Scenes from the Philippine Volcanoes' Win Against UAE
Loading
Already a member? Log in
No account yet? Create Account
Spot.ph is your one-stop urban lifestyle guide to the best of Manila. 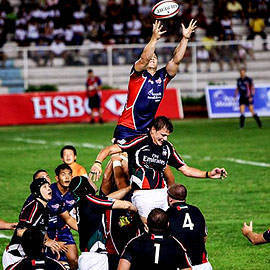 Tight Shorts and Orange Wigs: Scenes from the Philippine Volcanoes’ Win Against UAE

With the Philippine Volcanoes staying in the Top 5 of Asian 5 Nations, we better read up on our rugby! 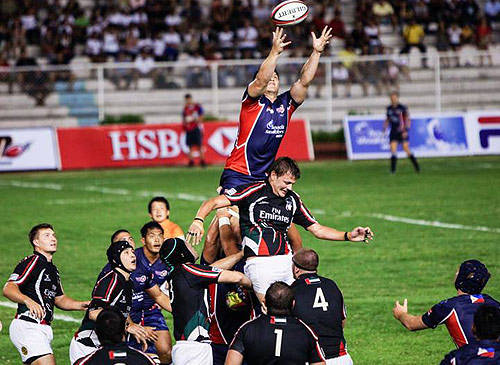 (SPOT.ph) Apart from the really handsome hunks wearing form-fitting shorts, rugby's biggest come-on is that you don't need to know anything about the sport to enjoy it. You can go to a game clueless and still come out screaming like the biggest fan girl, as long as you know who you’re rooting for.

On Saturday, May 18, the Philippine Volcanoes won against UAE, 24-8, in a crucial match that determined both teams’ standings. Both teams belong to the Asia 5 Nations Top 5 elite division; the winners will remain in the elite division, while the losers move down a notch to Division 1. This was the Volcanoes’ last home game; in June, they play Russia.

Saturday saw a considerable crowd turn out at Rizal Stadium-5,700 in attendance, as the Philippine Daily Inquirer reports. While UAE had a pretty strong support system, the Volcanoes supporters were all pumped up, hollering back every time the UAE fans cheered. 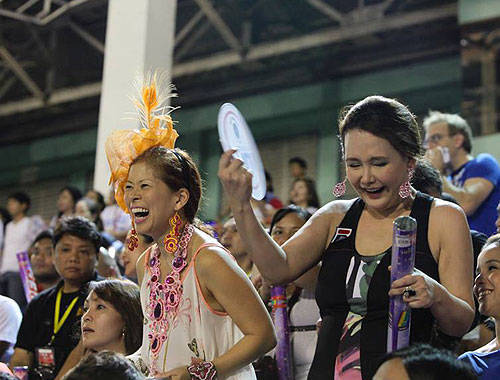 Can’t possibly miss her: Tessa Prieto Valdes having fun at the game 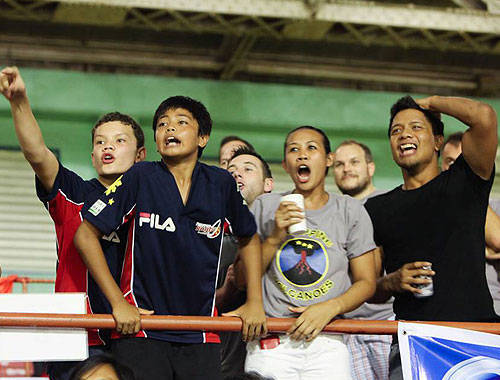 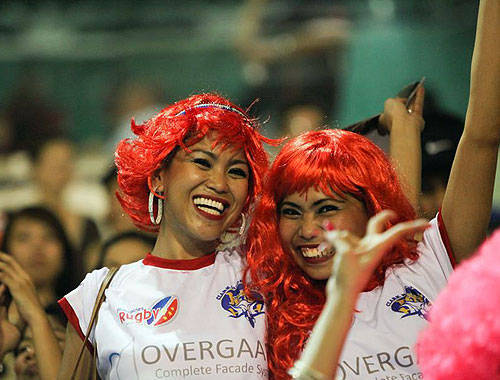 How could they not? At just the 11-minute mark, the Volcanoes scored a try, the first of the match, care of Chris Hitch a.k.a. The Sexual Chocolate. It was quickly followed by Gareth Holgate boosting the lead to 10-0 in the first 15 minutes alone. Despite the huffing and the puffing and the dragging and the tackling, the pushing, the shoving, the diving, the kicking, and the scrambling, the Volcanoes dominated the first half, ending it with a 12-5 lead. 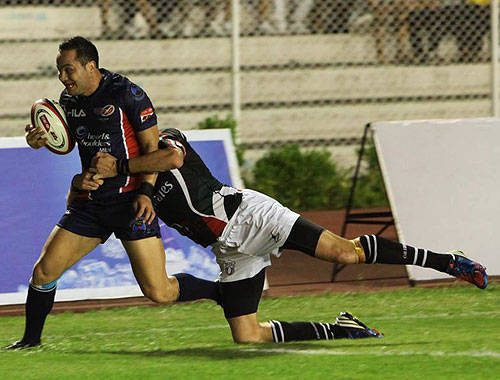 He dragged along the defense, as he sprinted toward the goal. 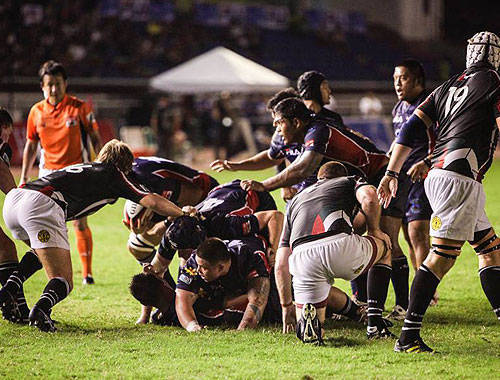 Rugby is played in 7s, 10s, and 15s, which is to say seven players, 10 players, and so on per team. A 7s match is the fastest of the lot-which showbiz celebrity Andrew Wolff prefers, by the way-while 10s is reserved for friendly games. Saturday was a 15s match, which is tougher, rougher, and possibly the most dangerous of the three. 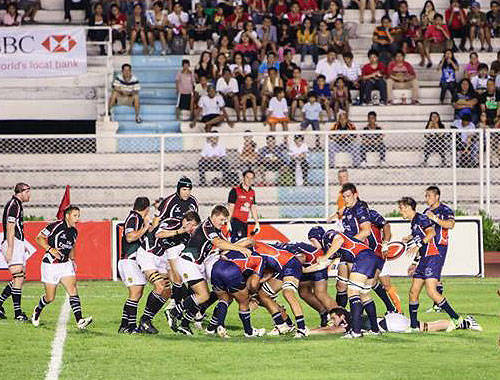 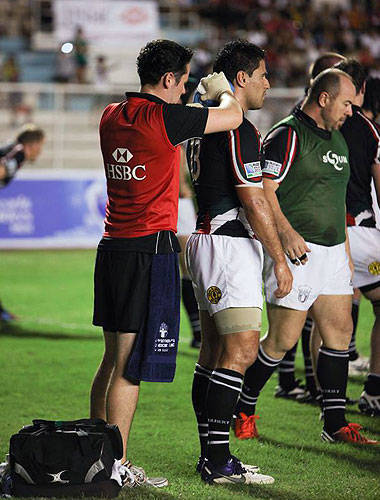 Physical therapists were in and out of the field, giving players some much-needed assistance

"Filipinos like their violence, so I don't know why rugby has yet to catch on," Santos goes on. And it's true: boxing has long been in the mainstream, MMA is slowly gaining popularity, but rugby? Let's put it this way: That Saturday, there were more expatriates in the crowd than Filipinos. And the Filipinos who were there attended mainly because the Volcanoes are hot young hunky guys in tight shorts. 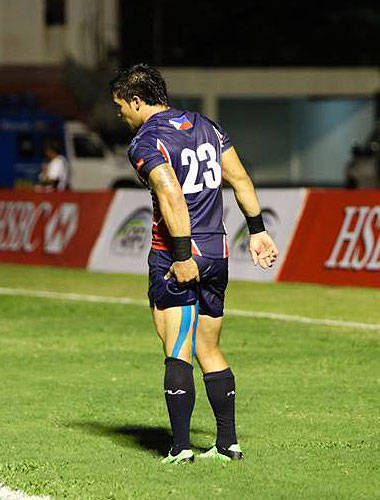 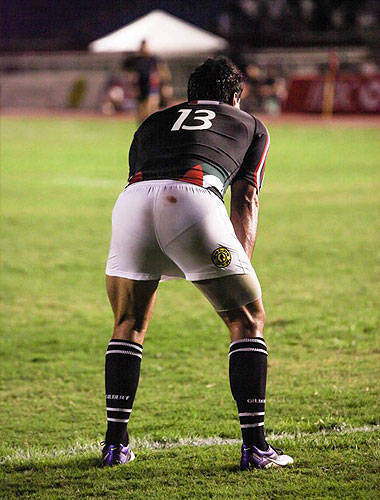 Perhaps it's a lack of celebrity personalities that plagues the sport. "Every game sees a different set of players because their presence really depends on their availability," informs Santos. The Volcanoes rely on half-Pinoy rugby players based elsewhere in the region who want to play for the Philippine flag. At the onset, however, are a few names you might want to bookmark: There's Michael Letts, the Volcanoes' Captain; Justin Coveney, who wears the number 22 jersey, also known as The Flying Jeepney; the aforementioned Chris Hitch a.k.a. The Sexual Chocolate;  Half-French, half-Pinoy Patrice Olivier, who is also a top scorer; The Saunders brothers, Oliver, Matthew, and Ben; and Joe Matthews. 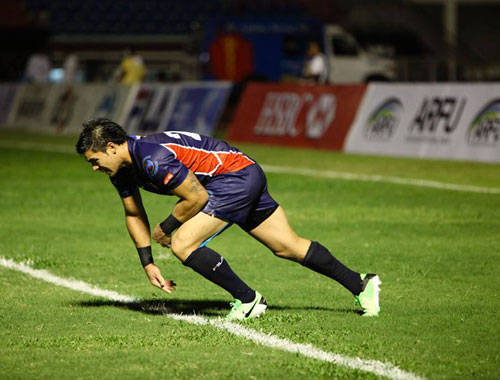 Matt Saunders, a name you might want to remember

One thing that will help spectators identify the Volcanoes is their shoes; they like their shoes colored, and colored brightly. "Yes, that's rugby fashion. They like them flashy. One of them even orders custom-colored shoes," confirmed Santos. From neon green, to hot pink, to highlighter yellow, to orange, you can expect our rugby players to come kicking with flair. 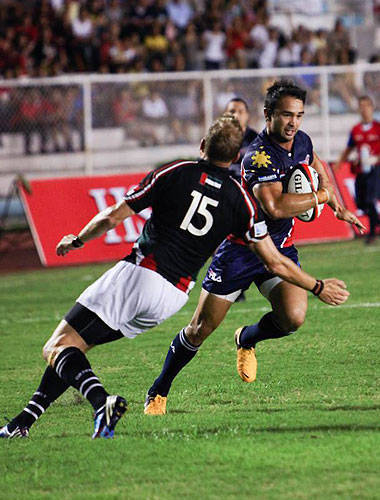 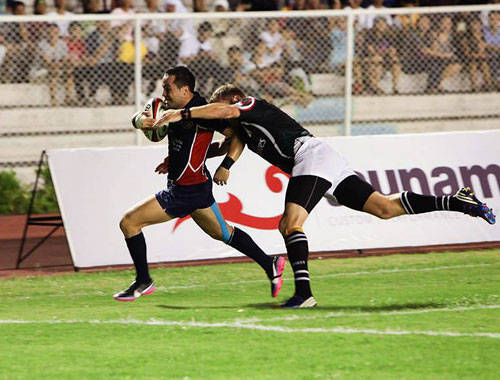 But nothing could’ve been flashier than Matt Saunders’ winning try. At the 79th minute, Saunders took to the middle of the field, all on his own, to score a try for the final score of 24-8. All in all, it was a very exciting match. 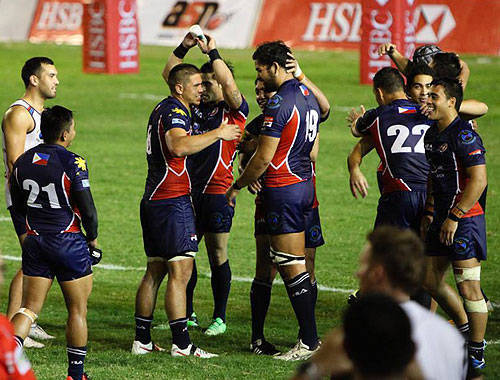 The Volcanoes immediately after the win.