Rene Rivo has made a name for himself in the audiophile community with his expertise in restoring and assembling turntables and amplifiers.

(SPOT.ph) They call him “master.” You don’t have to, of course, and those who call him that do so affectionately. But he’s definitely earned the title

Rene Rivo has been in the audio business for over 35 years. Musicians, music lovers, gear heads, audiophiles, make their way to his shop in Marcelo Green Village, Parañaque (he used to have smaller premises in Makati). His shop sells restored turntables and amplifiers, and he’s a dealer for some high-end brands as well. There’s no price list, though, for the amps that he builds from scratch—these are the product of long conversations; if you want everything wired with pure silver, for example, he can do that for you.

Some clients just need their cartridge aligned or need to buy a cable from the store. Some drop in because they’re in the area and want to hang out and hear what’s playing on the system that’s in place that day—the shop is also where Rivo tests the amps he’s built and gives them a thorough workout, listening for ground buzzes and checking if the channels are balanced. Others come in to commission an entire system built from scratch. While we were there doing the shoot and interview, Ely Buendia popped in to have his turntable repaired. 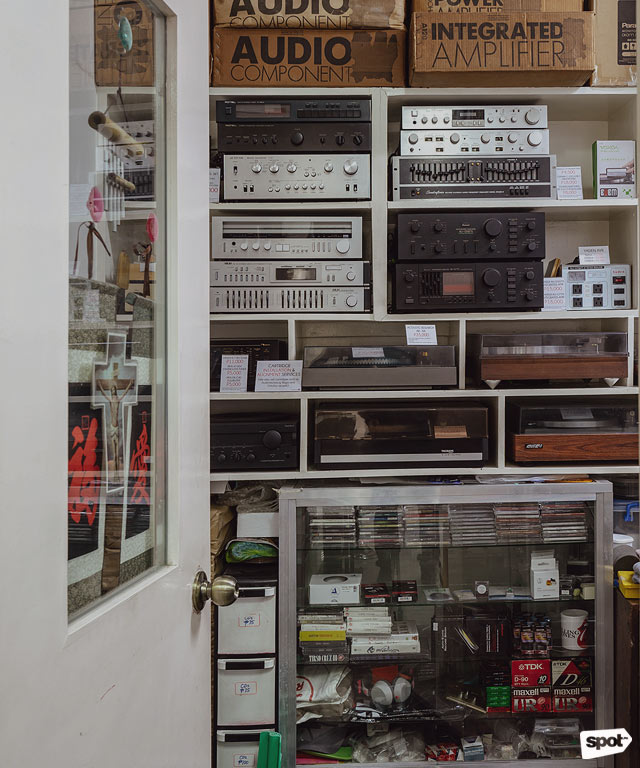 “Lots of kids,” he says, of his current clientele. “The other day I had a teenager come in. I asked what he listened to. He told me, Pink Floyd’s Dark Side of the Moon. Another youngster was into Miles Davis. You’d be surprised.” I was indeed. I said I felt this generation seemed less connected to music than mine. He shook his head. “They’re more involved. There are more ways they can discover music. They have more ways to play it.”

His current showroom/listening room was sound-designed and tuned by one of his friends, with acoustic materials running into hundreds of thousands PHOTO: Patrick Martires

Rivo’s own musical tastes are eclectic—they definitely go beyond the usual audiophile cliches of "Hotel California" on repeat. He introduced me to Jennifer Warnes and Dave’s True Story, among others. He is a great fan of OPM, and has an extensive collection of records from iconic local bands from the '70s that he’s hung on to over the years; he also has some rare original pressings of Beatles records in his own personal collection. This is not on display and not for sale, though if you ask nicely he’ll bring an armful of rare vinyl under his arm to a listening session.

Still, you couldn’t accuse Rivo of being a digital snob. The system in the shop has a digital front end, a music server running JRiver into an iFi digital-to-analogue converter. This is the handiwork of his son, Ralph, who helps run the shop with him. But Rivo Sr.’s first love is tube amplification and vinyl. In 1985 he “gutted” his first Dynaco ST-70, a classic tube amplifier that remains one of his favorites to this day. The 1980s were when the tube revival began amidst the huge solid-state power amps that epitomized the era, so he began tinkering. He had studied engineering at Mapúa University so he knew the ins and outs of solid-state circuit design, but tubes were another matter. 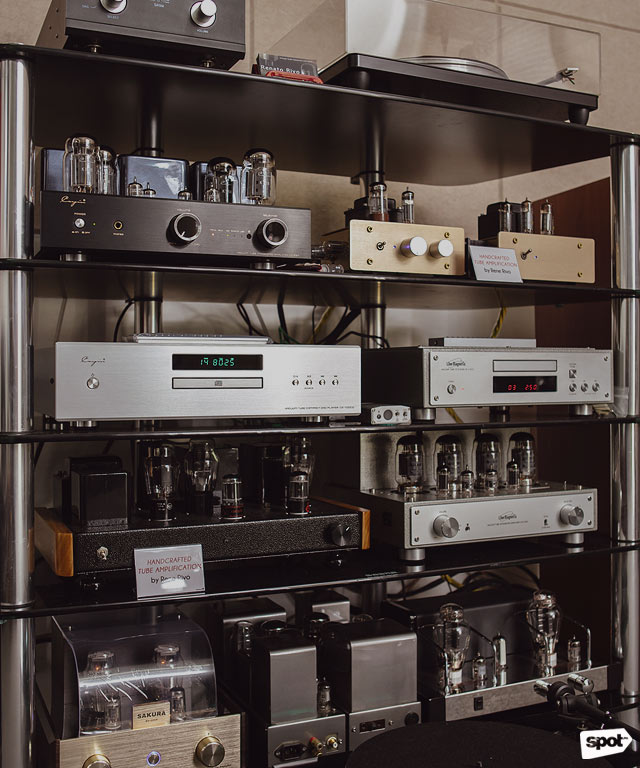 “I wasted many hours—well, I don’t know they were wasted, but I spent many hours figuring out how to lay out the the wiring on a chassis.” Rivo is known for his extremely neat wiring, that almost looks like it was done by a machine—but no machine can solder point-to-point (components are wired directly to one another, rather than to a printed circuit board). “But there’s a logic to that. Just a few centimeters wrong, and you get a buzz. Or a hum.” His favorite designs are those made by Joseph Esmilla, the renowned violinist, who was an audio designer in his spare time. 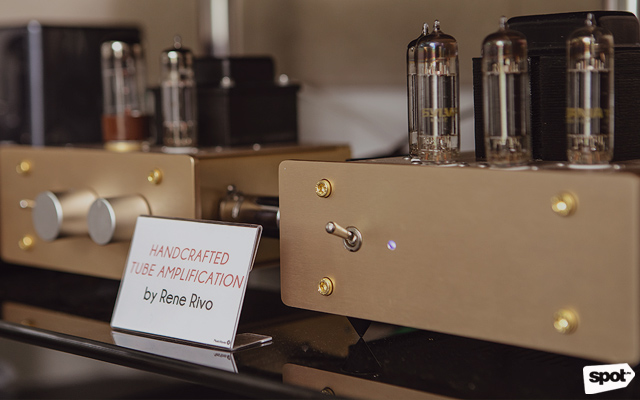 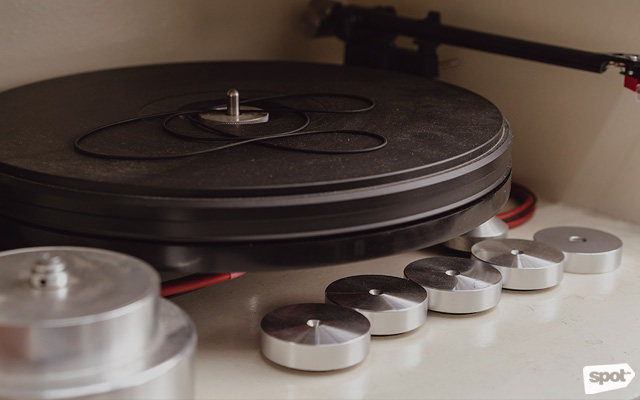 So back to those kids who come in looking for their first turntable system. He sets them up with a vintage turntable that he has restored—changed the belt, oiled, buffed up—paired with his own mod to a production-line amp, the Sakura AV200T. Then you get your choice of speaker—maybe a bookshelf speaker to start with. And that’ll set you back about P35,000, about how much a name-brand wireless one-box wonder with bloated bass would cost. But this is a proper system. It plays records. And it has what Rivo says is the most important quality of any system: musicality. “That’s the most basic thing we’re looking for. It has to be musical.” It has to get the toes tapping, it has to get you involved in the music.

From there you might upgrade to a classic amp, like Eico or Fisher or Marantz, one of the famous tube amps of the 1970s. And then you might get better floorstander speakers or an idler-drive turntable, like a Garrard 301 or a Thorens TD124, like the one he’s restoring now. “Sometimes these audiophiles can blow a fortune on expensive equipment and still not get the basics. You need to hear the dynamics [the subtle differences in volume] because that’s where the music is. You have to have P.R.A.T [pace, rhythm, and timing].”

At the highest echelons of the audio spectrum are single-ended triode amps—classic tube circuits using valves that were really made for music amplification, which produce only abour 3 to 5 watts of power. These would be coupled with horn speakers, vintage drivers that were made for what are now affectionately termed “flea-watt” amps. I’ve watched Rivo set up a system before this: everything from checking that the speakers were in phase to catching problems with the turntable set-up.

Come and Stay for the Music

“I used to have people coming in with turntables that they’d been using for years that hadn’t been properly set up. They didn’t know they had to adjust the tracking force.” These days, he tells people to get on YouTube, where there are many videos that teach the basics of turntable setup. “Until you’re using really high-end turntables, that’s more than enough. After that you need to get your protractor, your stylus force gauge, a blank record [to check if the arm is pulling in one direction, known as anti-skate], a mirror…”

People who go to Rivo’s shop don’t usually just pop in and out. He likes it if his customers stay, listen to some music, chat, have some snacks. Sometimes he’ll let you bring things home to see if they’ll jibe with the rest of your system. It’s the opposite of fast, consumer-product audio. This is bespoke audio, hand-crafted (as hipsters would put it). But the most important thing is building a relationship—not just with Rivo himself, but other audiophiles. Hang out at his store long enough, and you’ll find yourself getting invited to a private listening session or a vinyl trade bazaar. 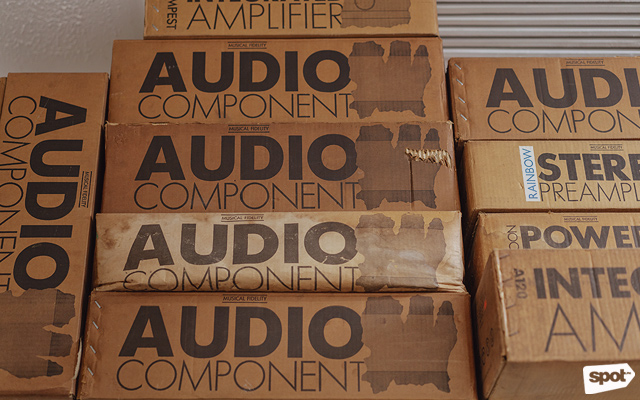 The glory days of hi-fi are over or are just beginning, depending on whom you ask. But definitely, tube amplification and record players are a niche market, just like mechanical watches and bespoke suits. Whether you’re dipping your toe into vinyl and tubes for the first time, or you’re chasing that perfect idler turntable to add to the five you already have at home, the master himself is here to help.

Update as of August 17, 2018 (2:10 p.m.): The first version of this article stated that the shop is located in BF Homes, Parañaque. This has been corrected.