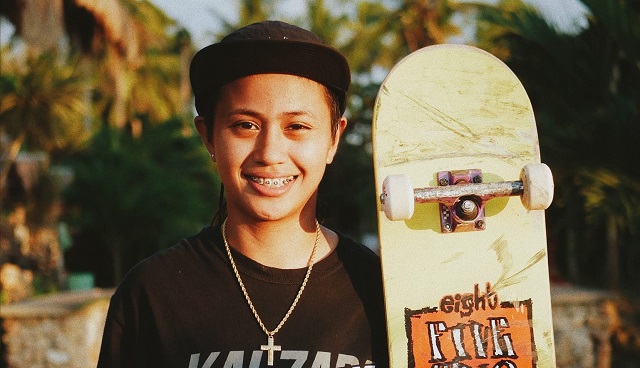 Margielyn Didal shows us how it's done.

Skateboarder Margielyn Didal hopes to get as much exposure as she can to qualify for the 2020 Tokyo Olympics. Not that she hasn't gotten any, as the life of the 21-year-old Cebuana has turned a complete 180 degrees since bagging the gold medal in the 2018 Asian Games in Jakarta-Palembang, Indonesia in August. In 2018, Didal was named one of TIME's most influential teens.

From a kid who used to skate on the streets, she's now on top of the world—and traveling around it, too, as she joins different competitions abroad. "After Asian Games, nagpunta akong U.S. for exposure. [I joined] an all-girl skate event and luckily nakuha ko 'yong first place," says Didal during the Asia Specific Skate Tour at New Balance in TriNoma, on July 19.

"After that umuwi ako [then] bumalik sa Japan for a skate exchange and then they had a mini event and [I] got third [place]," she adds. Being away from her family for a couple of weeks, even months, at a time meant Didal could not help but feel homesick.

Fueled by the dream to make it to the Olympics, Didal vows to go all out for the remaining tournaments—which includes the Street League Skateboarding World Championship happening on September 18 to 22 in Mexico.

"May mga rankings and qualifications for Olympics and sobrang busy," she said. "I think before the year ends, 'yon 'yong malalaman. The more important [competition] is sa Mexico. SLS, Street League Skateboarding. Merong [competition] by end of July pero the most important is Mexico."

"[SLS] is gonna determine next year's ranking and then going into the Olympics; It's like the next big one," said Jamie Foy, a professional American skateboarder.

According to World Skate, the qualification system for the Tokyo 2020 Olympics will be based on World Skateboarding Rankings. Skateboarders earn points when they join World Skate-sanctioned events—of which SLS World Championships is a part of— during the Olympic qualifying period, which spans January 1, 2019 to May 31, 2020.