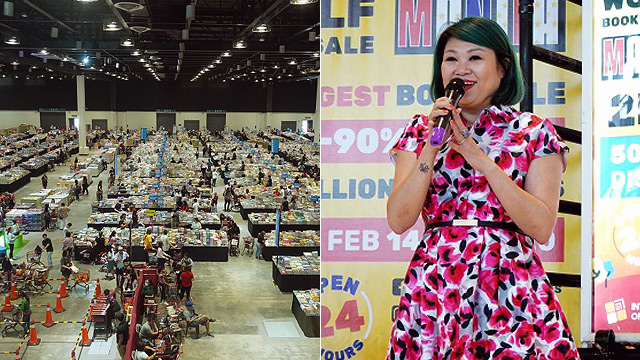 Meet the Woman Who Brought Millions of Books to Our Shores

Even the Big Bad Wolf has a mother. Read the story straight from co-founder Jacqueline Ng.

(SPOT.ph) What does it take to fill a hectare’s worth of space with books, books, and more books? To be precise, that’s two million books with 33,000 different titles all at the ongoing Big Bad Wolf at the World Trade Center in Pasay City. Well, just like all the stories you can find at the “world’s biggest book sale,” this tale also has its own beginnings—but not quite an ending just yet. If you want to know how this bibliophile free-for-all started, then look no further than co-founders and real-life couple Jacqueline Ng and Andrew Yap.

It may be hard to imagine just two people behind this huge event—TBH, the idea of a nearly-two-weeks-long, open 24-hours, mega book sale was pretty much unheard of until they brought Big Bad Wolf to Philippine shores in 2018—but the Ngs are living proof that it’s not just a possibility, it’s their reality. It may have taken years and a whole lot of tenacity, but as Jacqueline Ng tells us during the opening of 2020 Manila run on February 13, this is really still just the beginning.

It All Started With Old Magazines

Ng admits that she was never really into books as a child, but her love affair with reading began with a small secondhand magazine shop called “Reissued” that she and Yap used to own in Malaysia. It was in the mid-2000s and she had just moved to from Singapore to be with him. “It was a tiny shop, just around 500 square feet,” she tells SPOT.ph. “There were hardly any customers that walked in,” she adds, laughing. The shop was a means for her to do something with her time in a new country, and as the only one minding the place from dawn to dusk, Ng says she had quite a lot of it.

Which is where the secondhand bookshop near their own came into play. “I started renting books—it was still too expensive to buy—from the shop across me,” says Ng, who devoured all kinds of fiction works while working in Reissued. Books were a bit of a luxury in Malaysia at that time, especially imported ones; a fact that Ng would later on use as a drive to start the Big Bad Wolf.

Then There Were Remaindered Books

Though Reissued only lasted for about two years, it was still a blessing for the couple. One of their suppliers told them about this thing called remaindered books. “These were the overprints and the returns—but who would want to buy them?” was Ng's first thought. People usually wanted the newest editions and the newest, most popular works but as she realized, “I read fiction I can’t afford to buy.” This was the case for many Malaysians who loved to read, she felt, and it was the same for those who never picked up books and were scared off by the price tags. “But if we could bring the prices down, you might try to buy. It’s a very simple concept,” says Ng.

So in 2006, the couple packed up shop and moved to another 500 square feet space “right next to the magazine shop,” and they named it BookXcess. This time, Ng had help in the form of one other staff member. It was here, while doing everything from cleaning to organizing and most importantly, talking to customers and finding out what they liked and didn’t like, that Ng began the first steps towards what would become the Big Bad Wolf. “I will always treasure that time as it gave me a very strong foundation; it gave us the whole philosophy and drive of the business.”

Since then, the couple has built and curated their database based on their interactions with customers. Ng points out that neither she nor Andrew “come from corporate backgrounds. We are not retail people; we didn’t know how to do the business. So we learned through our customers who eventually became our friends. They never hesitated to give us their comments or suggestions.”

“We gave ourselves six months to test the remaindered books,” says Ng. At the end of the period, the response they got from excited book buyers had them packing up shop again—but this time to move into a 3,000-square feet shop. It was here that the ball really started rolling for them. “We tried to have a better range of books, we knew customers by name, we knew what they wanted,” says Ng, adding that “I had three staff [members]!”

“The goal was always to increase readership,” says Ng. The shop helped keep book lovers alive, but “it was really hard for me to convert a non-reader.” They needed some way to reach out and make people look, and ideally maybe read, their books. “That’s why in 2009, we started Big Bad Wolf.”

At that time, the couple had around RM 5,000 (around P60,000) to advertise their book sale—enough for maybe a single newspaper ad. They knew they had to make it good, so when Yap suggested the name “Big Bad Wolf,” Ng wasn’t very into the negative connotation of the fairy-tale villain. “We can argue, but when my husband says it’s like this, then it is,” she laughs. Fortunately, Yap made the right call and the cheeky character reference created enough drive and word-of-mouth for the first ever Big Bad Wolf Book Sale; So much so that they decided to make the second run in 2010 operate 24/7.

“We started the 24 hours with the intention of attracting the youth,” explains Jacqueline. “Maybe after they party, they will come to the book sale.” So they did arrive at random hours of the night; teenagers in high heels and crazy make-up, she says, buying books and reading. But more than just the kids, people from all around Malaysia drove for hours to get to the book sale. “We never expected for people to travel and drive so far; it was amazing. To us, these are things that [encourage] us to continue what we do,” says Jacqueline, “and yes, get bigger, bigger and bigger,” she adds with a smile.

The Big Bad Wolf Book sale has continued on in Malaysia and eight other countries, namely Thailand, Taiwan, Indonesia, Sri Lanka, Pakistan, Myanmar, South Korea, the United Arab Emirates, and of course, the Philippines. It isn’t easy, but for Jacqueline, “The Big Bad Wolf stands for a mission,” she stated during the 2020 Manila opening on February 13. “This is about converting non-readers into readers and to bring books to the hands of those who can’t afford it.”

Books, and all kinds of stories, have the power to expand horizons—make people see and understand things they didn’t before. This is what Jacqueline and Andrew bring with the Big Bad Wolf, “to be able to inspire, to be able to empower,” says the co-founder. This book sale does not end with the walls of whichever convention center it is in. It continues on with every book bought, and hopefully, every person who reads. The story of  the Big Bad Wolf is far from over and for once, we don’t think it’s one that will ever end.

Adventurer Savvy Seasoned Jacqueline Ng Books Big Bad Wolf
Your Guide to Thriving in This Strange New World
Staying
In? What to watch, what to eat, and where to shop from home
OR
Heading
Out? What you need to know to stay safe when heading out