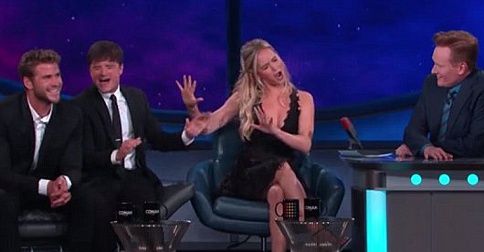 Remember when Jennifer Lawrence sang "Hanging Tree," one of the theme songs to last year's Mockingjay movie? It turns out her singing skills extend to belting out Cher's famous song, "Believe." In a Thursday appearance on Conan, she and co-star Josh Hutcherson broke into song for the audience. They actually do a pretty good job.

The bouncers involved in the Baron Geisler bar incident have spoken up. Edgar Tolentino, head bouncer of the establishment, said that the actor was denied entry because he was intoxicated. "May rules kasi kami dito, 'pag lasing na at 'di mo na kaya, bawal na," he said. When told about the policy, Geisler allegedly began shouting threats and expletives at the bouncers, including, "Magkano ka ba? P*tang ina mo, papatayin kita, pati anak mo."

According to the bouncers, this wasn't the first time Geisler made a scene at the bar. He allegedly made a pass at dancers in the bar three years ago.

You might remember earlier reports of the MTRCB summoning Pinoy Big Brother executives after receiving "numerous complaints." Now, the board mandated PBB 737 to submit specific "remedial and self-regulatory measures" and elevated the show's classification rating from PG to SPG. The resolution cited certain scenes that "offended the sensibilities" of viewers. This included the "bromance" between Kenzo Gutierrez and Bailey May, and the indecent proposal of one housemate to another male housemate asking the latter to be his "mistress."

It seems people were not entirely won over by Ariana Grande's July 9 apology after she was caught on video licking donuts and saying she hated America. On July 10, she recorded a video clip of herself apologizing again.

"Seeing a video of yourself behaving poorly that you had no idea was taken is such a rude awakening. It's like you don't know what to do; I was so disgusted with myself, I wanted to shove my face in a pillow and just disappear," she said in the four-minute video. "I'm 22, I'm human, I still got a lot to learn, I make mistakes and that's how I'm gonna learn. I'm going to learn from my mistakes. It's all a process and I want to be a good as I possibly can be for my babes....I'm very sorry and I love you."

5. Linkmoji turns any link into emoji

You can now turn any link into its emoji form, thanks to a new website that just launched on July 8. Linkmoji is kind of like URL shortening site Bitly...but with emojis. The site's functionality still needs a bit of work, but it's worth a shot. To access the site, type one pizza emoji, one poop emoji, and ".ws" into your browser.

6. Ben Affleck to star and direct in solo Batman movie

If you had any doubts about Ben Affleck as the Caped Crusader, it looks like you're just going to have to deal with it. The actor is teaming up with comic book and TV writer Geoff Johns for a new, standalone Batman movie. No release date has been set, but Affleck will direct the film.

On Friday, the Department of Health (DOH) said that the foreigner who tested positive for Middle East Respiratory Syndrome-Coronavirus (MERS-CoV) has been cleared of the virus. The patient is expected to be discharged from the Research Institute for Tropical Medicine (RITM) over the weekend.

The DOH was able to track the people who were on the same flight with the foreigner, and reported that none of them showed signs of having contracted the virus.

Lieutenant General Hernando Iriberri has been named the new chief of the Armed Forces of the Philippines. Iriberri has over 30 years of active military service under his belt with numerous awards (including five Distinguished Service Stars and two Gold Cross Medals) but is facing criminal and administrative cases before the Office of the Ombudsman for allegedly failing to issue documents for three procurement projects worth P97.7 million. The complainant, supplier Joavi Philippines Corp., is seeking a six-month preventive suspension against him.

Iriberri is set to retire in April 2016, a month before the presidential polls.

Switch up your usual merienda routine! We found 10 yummy Korean grocery snacks in the metro.

Gone are the owls and flamingos. In their place? SpongeBob's bright and fruity home! From phone cases to even shoes, check out the 10 pineapple-themed things we found.