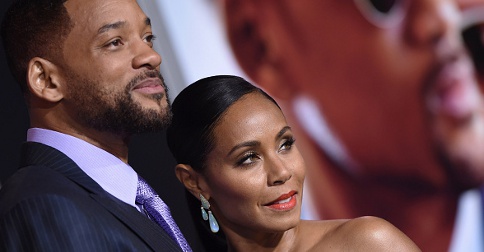 Love is still very much alive...at least in the case of Will and Jada Pinkett Smith, who took to social media to dispel rumors of their divorce. On his Facebook page, Will wrote, "In the interest of redundant, repetitious, over and over-again-ness...Jada and I are...not getting a divorce! I promise you all, if I ever decide to divorce my Queen, I swear I'll tell you myself!"

2. Robin Padilla and Mariel Rodriguez may be having triplets

After earlier confirming that he and wife Mariel Rodriguez are expecting twins, Robin Padilla announced that they may actually be having triplets. "One has a heartbeat, one has a forming fetal pol, and one has a sac. All iba-ibang age," wrote Mariel on her Instagram. "But I have a condition that I have to explain to you later so I will take blood tests."

Robin added that if they have triplets, they will be named Maria, Juan, and Gabriela de Padilla.

3. Gwen Stefani and Gavin Rossdale are getting a divorce

Gwen Stefani has filed for divorce from her husband of 13 years, Gavin Rossdale. She cited irreconcilable differences but they are both seeking joint custody of their three kids. "While the two of us have come to the mutual decision that we will no longer be partners in marriage, we remain partners in parenthood and are committed to jointly raising our three sons in a happy and healthy environment," they said in a statement.

4. Cherry Pie Picache talks about moving on from mother's death

Cherry Pie Picache admitted that she still finds it difficult to move on from her mother's death. (The latter was found dead in her home due to multiple stab wounds last year.) "Ang hirap [mag-move on]. Siyempre unang-una natural naman sa atin ang magalit, gumanti. I mean I’m being honest," she said, noting that she and her family are trying to move forward. "I know this is how she would want me to be."

Dropping your iPhone into water usually warrants a long stay in a bag of rice, and even that doesn't always save it. A man from Texas, however, dropped his phone from 9,300 feet when he was flying in a small aircraft. He eventually found his phone via the Find My iPhone app and discovered that the gadget was still working perfectly...save for a few minor scratches.

6. P-Noy asks Mar to stay at DILG despite resignation

President Aquino has asked Interior Secretary Mar Roxas to keep his post in the DILG, despite the latter submitting a resignation letter on Monday. According to Communications Secretary Herminio Coloma Jr., Mar was asked to "complete urgent tasks and ensure smooth transition." There's no word yet on how long Mar will stay in the Cabinet or who will be his replacement.

According to a July 29 laboratory examination by the Philippine National Police (PNP), the fingerprints on the condom taken from transgender Jennifer Laude's motel room does not match that of U.S. Marine Lance Corporal Joseph Scott Pemberton's. The murder trial is set to resume on Monday (August 10).

Typhoon Soudelor has been touted by The Weather Channel as the "strongest tropical cyclone seen anywhere on Earth so far in 2015." The Joint Typhoon Warning Center (JTWC) estimated that the super typhoon is headed towards Japan, Taiwan, and China, reportedly sparing the Philippines. PAGASA earlier said that the typhoon is not expected to make landfall in the country.

9. 10 Fun City-Building Apps That Will Make You Forget Real Life

Clash of Clans is probably the most popular app right now, but you'd be surprised by how many more city-building games are out there. We rounded up 10 fun apps that will get you engrossed in another world, whether it's Jurassic World or a remote desert island.

How is it fair that all the cute patterns and designs are in the men's section?!! We found 10 polos that are perfect for your boyfriend...and you, because we wouldn't want you to miss out.