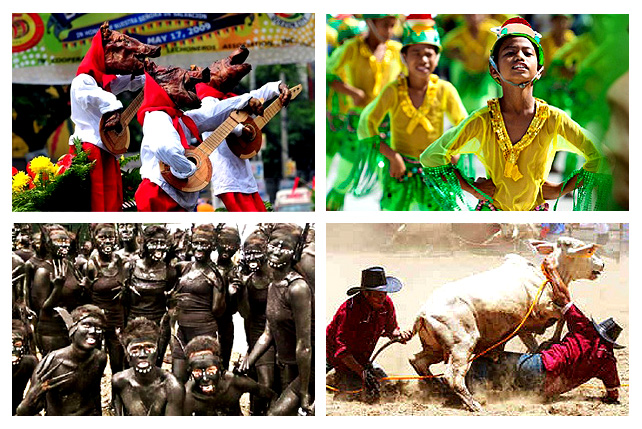 Local traditions that aren't the MassKara, Panagbenga, and Sinulog 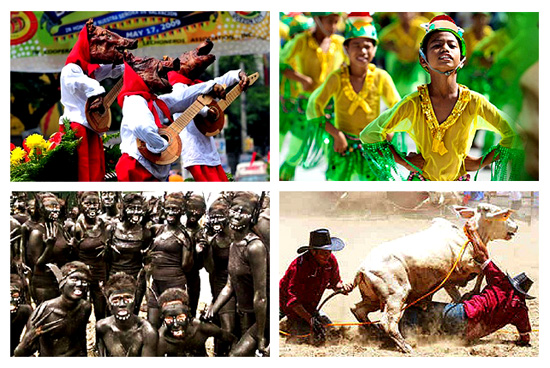 Filipinos love to party, that’s a fact. Whether it be for a religious occasion, a charter day, etc., we will find a reason to celebrate. From the biggest cities down to the smallest barangays, there is always a scheduled time for a fiesta.

Notwithstanding the sheer number of festivals celebrated across the country, some do stand out for being different. It’s fine though, as those differences exemplify the diversity of Filipino culture.

Let’s find out more about these odd festivals and where and when they are being celebrated. Who knows, maybe we’ll even get to celebrate them ourselves someday. 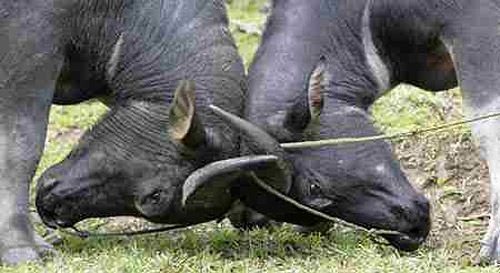 Held every March 22 or Black Saturday, the event features cockfights, horse-fights, and the odder carabao-fights. First celebrated in the 1600s, the festival—and the animal jousts in particular—were seen as the Filipinos’ subtle way of protesting against Spanish rule.

Presently, the festival continues to see an influx from tourists—and animal activists—for its strange attractions. 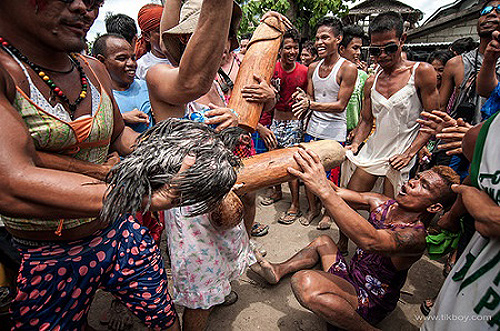 Held every May—particularly on the date with the highest 12-noon tide—to honor San Vicente Ferrer, the celebration features a variety of oddities including cross-dressing men, the simulation of giving birth by said men in the sea, people wearing or carrying phallic symbols, inter-animal fights (roosters, cats, and even kittens and frogs are used), and selling of cow manure topped with ketchup.

No one really knows when the festival began although the older ones say it was first celebrated during the 18th century or even earlier than that. Due to its pagan undertones, the local Catholic Church even banned the festivities for a while; nowadays, it is still being celebrated and is defended by devotees as a plea to their patron saint for help in coping with life’s madness. 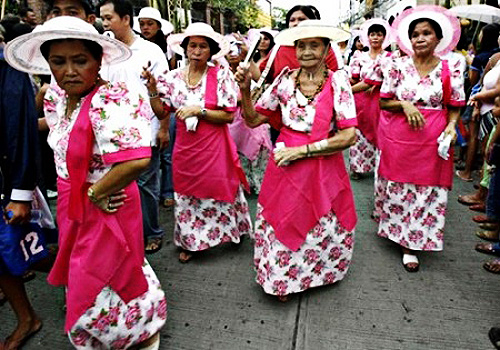 Usually celebrated from May 17 to 19, the Obando Fertility Rites traces its roots back to pre-Spanish times when pagan natives would celebrate it in hopes of having children or getting a good harvest.

Nowadays, the festival is a mix of pagan and Roman Catholic beliefs, with San Pascual de Baylon, Sta. Clara, and the Lady of Salambao replacing the old idols as the central figures. Childless couples and singles looking for their soulmates can do the fertility dance in front of San Pascual and Sta. Clara; fisher and farm-folk meanwhile can dance to the Lady of Salambao for a good season. 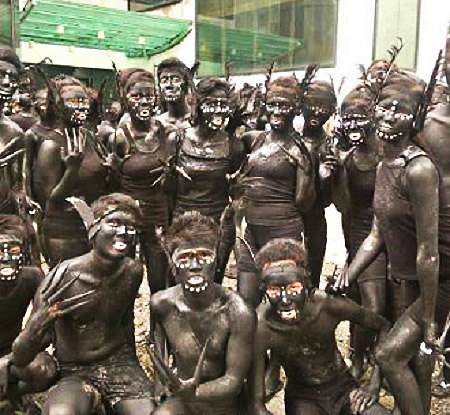 First celebrated in 2004, the Aswang Festival showcased the country’s most famous monsters and was held on October 29 until October 30.

Organizers of the festival, Dugo Capiznon, hoped to change people’s perception of Capiz as a haven for aswang and instead use the mythical creatures as a tourist attraction, which is why the parade was made up of people dressed in various monster costumes.

Unfortunately, the festival was shut down in 2007 due to strong pressure by the Catholic Church who feared the festival could sway people towards evil. 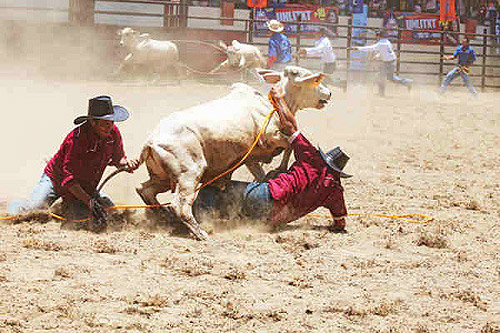 For those who want to see a Western-style rodeo with a Pinoy twist, there’s the famous Rodeo Masbateño, a five-day festival held right in the heart of the country’s Cattle Capital every April, established in 1993 by a group of ranchers.

Said to be the province’s biggest event, the festival has the feel of a real rodeo. Events range from the quintessential cow-wrestling, lassoing, to the more-Filipino calesa rides. There are also cattle parades, barn dances, and livestock shows. 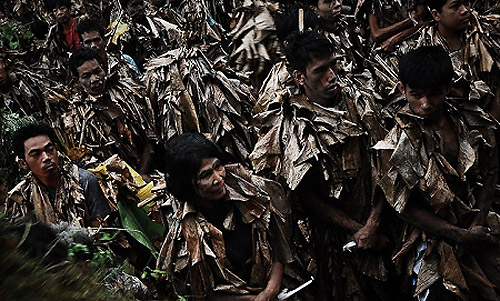 While many of us would usually commemorate St. John the Baptist‘s Day (June 24) by just dousing each other with water, the people of Aliaga, Nueva Ecija, take it up a notch by drenching their bodies with mud and covering themselves in vines and banana leaves before joining the procession dedicated to the saint.

The practice is said to have been introduced during World War II, when the Japanese were about to execute all the male residents in revenge for an earlier guerrilla ambush. Just as the execution was about to start, it began to rain heavily. The Japanese took the downpour as an ominous sign and set their prisoners free.

The jubilant villagers attributed this miracle to St. John the Baptist and celebrated by rolling in the mud. Since then, the townspeople have celebrated June 24 in that fashion. 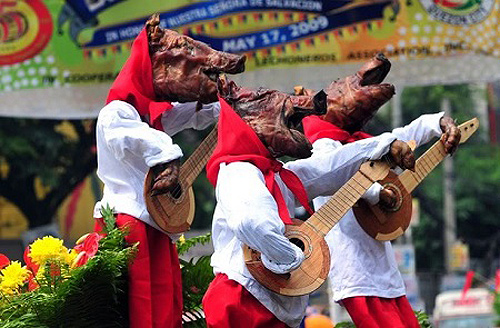 While there are undoubtedly many “lechon festivals” across the country (Pinoys have a love affair with pork after all), the people of Balayan, Batangas probably enjoy an edge with their world-class Parada ng Lechon.

The festival—which also commemorates St. John the Baptist—sees hundreds of roasted pigs being paraded in the streets every year on June 24. Some are adorned with costumes, while others have their heads removed and placed on mannequins. At the end of the procession, the lechon are usually brought to the local church and blessed; afterwards, they are distributed to the public for consumption.

First organized in 2003, the frog-themed festival held every first week of October is meant to showcase the importance of frogs to the culture of Pampanga, especially to that of the Fernandinos. Attractions include traditional frog-catching contests, frog-based cuisine such as stuffed frog, and other fun and games involving the beloved amphibians. 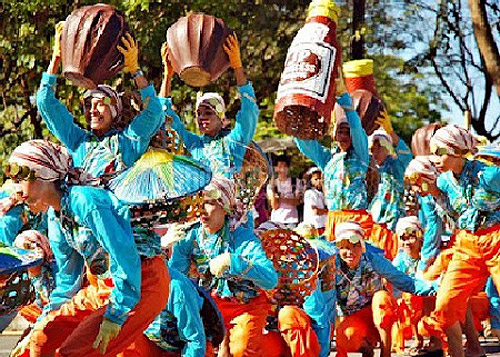 Salted fish or shrimp paste as the theme for a festival? While it may sound strange, the people of Lingayen have celebrated the Bagoong Festival since 2011 as a way to celebrate their main source of livelihood. You can watch dancers wearing shrimp costumes or those with bagoong bottles as they sashay away on the streets. 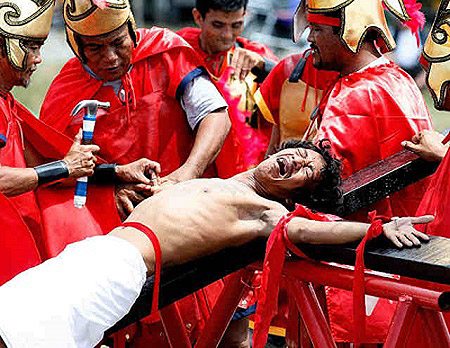 Said to have started during the 1950s and held every Good Friday, penitents of this barangay would line the streets and strike their backs bloody with sharpened bamboo whips. The gory spectacle does not stop there, however, as three devotees would re-enact the crucifixion of Jesus Christ and the two thieves by being actually crucified with nails on a cross in field near the barangay.

As to why they engage in such a practice, the participants say they do it in imitation of Christ’s suffering and as a form of penance. Due to the bloody nature of the event, the Rites have attracted both local and foreign tourists eager to see the penitents’ almost-fanatical devotion to their faith.

Read the full article, "14 Bizarre And Fascinating Philippine Festivals" on Filipiknow.net. Minor edits were made by the SPOT.ph editors.

Nostalgia Filipiknow Philippine Festivals
Your Guide to Thriving in This Strange New World
Staying
In? What to watch, what to eat, and where to shop from home
OR
Heading
Out? What you need to know to stay safe when heading out