Where do the richest Filipinos live?

More than half of them live in just four communities in Metro Manila.

(SPOT.ph) We’ve let you in on the 50 richest Filipinos, now Forbes Philippines has revealed where they live. 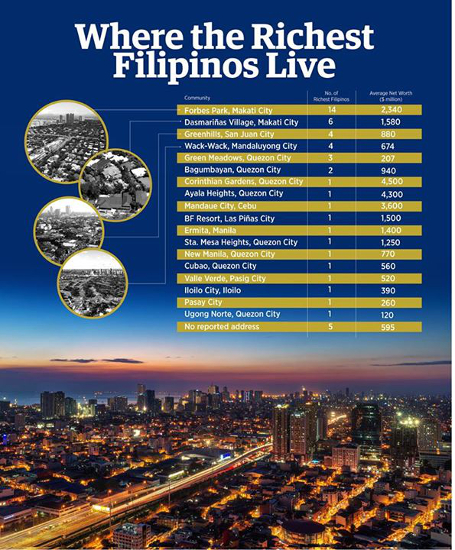 More than half of the wealthiest in the country live in just four key areas. Fourteen individuals on the list declared that they live in Forbes Park, Makati, with a combined wealth of up to more than U.S. $2 trillion. Another 14 said they live in Dasmariñas Village in Makati, Greenhills in San Juan, and Brgy. Wack-Wack in Mandaluyong.

Outside Luzon, Mandaue City in Cebu and Iloilo City are also home to the richest Filipinos.

Meanwhile, five people who made it to the list did not declare their addresses.

Forbes Philippines
Your Guide to Thriving in This Strange New World
Staying
In? What to watch, what to eat, and where to shop from home
OR
Heading
Out? What you need to know to stay safe when heading out