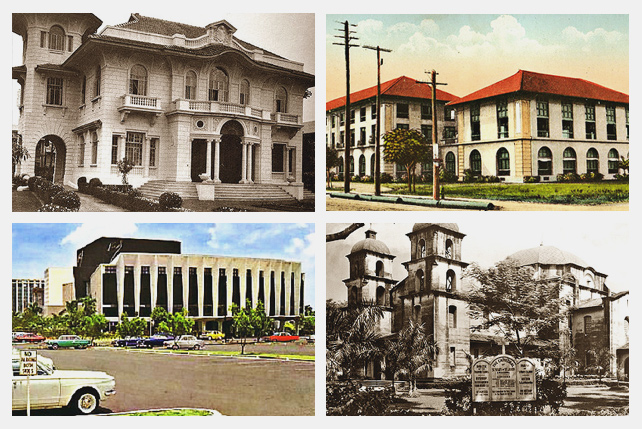 Architectural sights that are long gone but worth remembering. 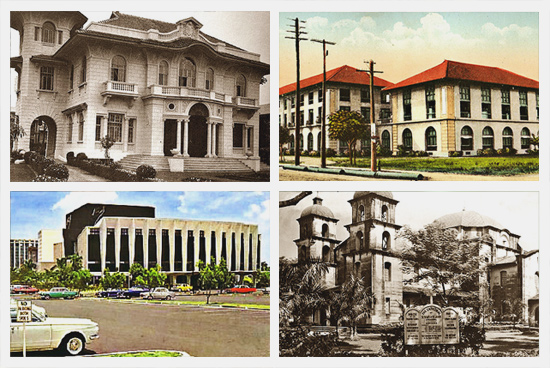 Some people claim that clinging to our past is useless, and giving way to technological advancements is the only way to go. We say a true sign of a nation’s progress is the ability of its people to preserve their cultural heritage—historical buildings included. After all, people are judged not by the monuments they build, but by those they have destroyed.

Gone are the days when Manila was known as the "Paris of Asia." Restoring the city to its former glory sounds unrealistic, but not necessarily impossible. In the meantime, let’s bask in the beauty of Manila’s old buildings that have completely vanished over the years. 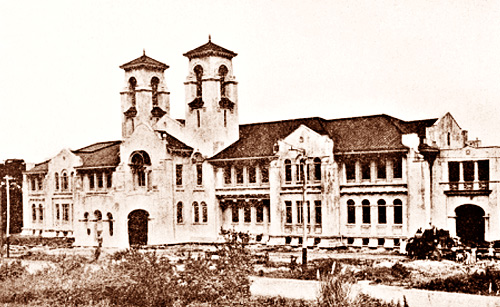 Designed in 1901 by American architect Edgar Bourne, this Mission-style neoclassic building was touted as one of the best equipped laboratory buildings in the world.

During the American occupation, the building served as a laboratory where minerals, agricultural products, and fauna of the Philippines would be stored and studied.

Like other unfortunate Manila landmarks, the Bureau of Science Building was also destroyed during WWII. The building laid in ruins along with several irreplaceable specimens that were valuable to the scientific community. The location of the building is now occupied by the National Institutes of Health at UP Manila. 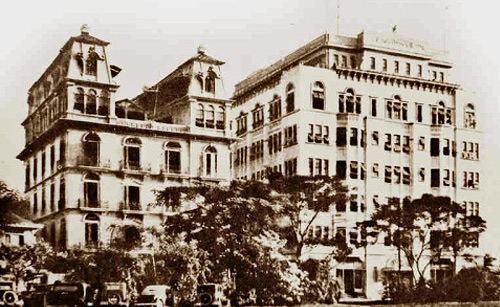 Operated by the nearby Luneta Hotel, the University Club Building served as a residential apartment slash hotel, offering 44 rooms complete with private baths. It became home to many American families as well as servicemen.

The building survived the war and later began welcoming tourists as the Shelborne Arms Hotel. It was renamed Orient or New Orient Hotel and continued its operations until the early 1990s when it was demolished to give way to a skyscraper that is yet to be built.

The Episcopal Cathedral of St. Mary and St. John 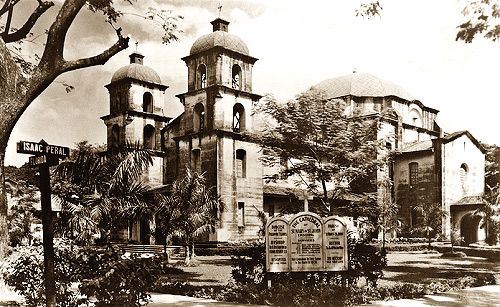 The Episcopalian Church of St. Mary and St. John was the largest Protestant church in pre-war Manila.

The construction of the cathedral was made possible by a cash gift worth U.S. $100,000 given by an anonymous donor. Another U.S. $20,000 was donated by Mr. and Mrs. George C. Thomas of Philadelphia. The stone and concrete church was erected on a property that was acquired by the Bishop in 1903. In addition to the cathedral, a Bishop’s residence was also built.

The Episcopalian Church was completed in 1907, under the rectorship of the Rev. Murray Bartlett (the first president of the University of the Philippines). Sadly, the church became one of the casualties of WWII. Its location on Isaac Peral is now occupied by the Manila Pavillion Hotel (formerly the Manila Hilton). 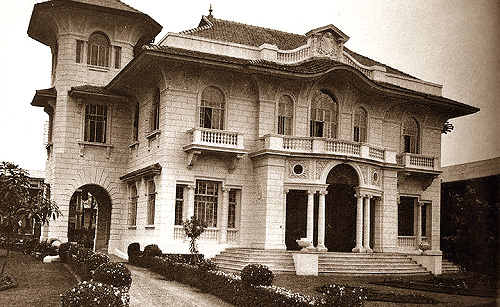 The mansion was built by Alfonso Zóbel de Ayala Roxas together with his wife, Carmen Pfitz Herrero. Alfonso is the son of Don Enrique Zóbel y de Ayala and the father of Ayala Corporation chairman emeritus Jaime Zóbel de Ayala.

Although the house survived the war in 1945, it was sold by Don Enrique to recover from the financial loss brought by WWII. The post-war mansion was occupied by the French Embassy, then by the Bank of Asia in the 1960s, and later by several antique shops.

The building was destroyed in the 1990s, giving way to the 1322 Golden Empire Tower which now stands on the property. 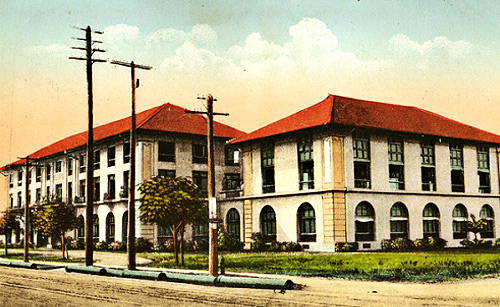 During its heyday, the Y.M.C.A. Building in Manila was the place to see and be seen. It was a social club for the rich where one could either learn how to swim or invite his foreign friends to stay. However, the purpose of this building was much deeper than that.

The Y.M.C.A. (Young Men’s Christian Association) was the brainchild of Dr. John R. Moll who envisioned it in 1907 as an association that would serve young American and European men. In the Philippines, the organization started on November 10, 1911 and soon launched a recreation program for the benefit of the Filipino youth. Some prominent public servants also collaborated with the organization, including Sen. Gil Puyat and Justice Jose Abad Santos among others.

The Y.M.C.A. Building once stood on a 35,000-square meter land originally bounded by Arroceros, San Marcelino, and Concepcion Streets in Ermita. Two of the buildings (see photo above) were destroyed during the war, while those that had been partially razed served as quarters for wounded soldiers and Death March prisoners. The land is now occupied by SM Manila, just behind the Manila City Hall. 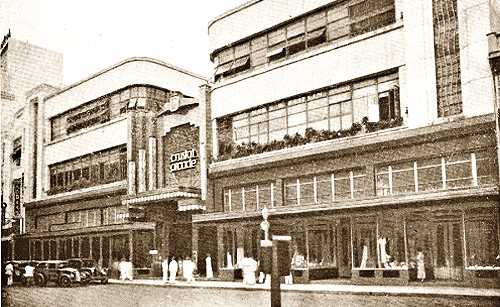 Another architectural masterpiece of Andres Luna de San Pedro, the Crystal Arcade in Escolta was inaugurated on June 1, 1932. It housed the Manila Stock Exchange as well as Marina Rae’s Candies. People visited this place both for the prestige and its air-conditioning which was a first in the country.

With its fine Art Deco lines, the Crystal Arcade was arguably the most modern pre-war building in the country. In fact, it was the first shopping mall in Manila to feature a walkway leading to the glass-walled shops on the first floor. The Crystal Arcade was also the place where the Bureau of Commerce (and Industry) held the first ever exposition of products made in the Philippines in 1932.

Sadly, the building was one of the casualties of WWII. It was reconstructed but it all went downhill from there. Eventually, the Crystal Arcade was demolished in 1966 and replaced by the Philippine National Bank head office. 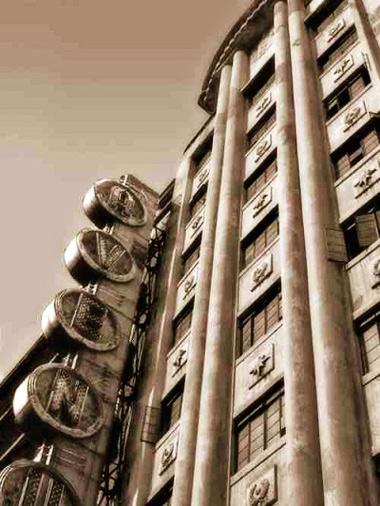 Built in Art Deco style, the Avenue Theater along Rizal Avenue (Avenida) was once the venue for vaudeville acts and American movie premieres during the 1930s and 1940s. It was a masterpiece of Juan Nakpil who became the National Artist for Architecture.

The theater had a 1,000 seating capacity and a grand lobby treated with a marble finish flooring. Aside from the theater, the building also had an office and hotel space. After the war, the Avenue Theater was renovated and had since become the venue for several live performances.

Unfortunately, the theater closed in 1997 and was eventually demolished in 2006 to make way for a parking lot. The site is now occupied by Padi's Point. 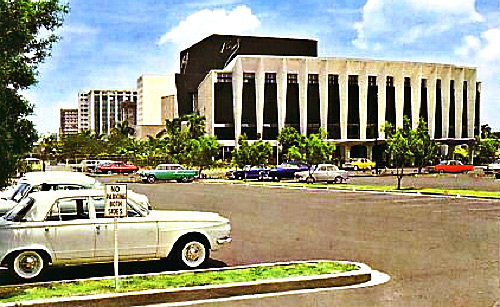 Another structure designed by National Artist Juan Nakpil, the Rizal Theater in Makati was originally intended as part of the Rizal Memorial Cultural Complex. The latter was set to be completed on June 19, 1961 but lack of funds got in the way of its construction.

The Rizal Theater was a film and performance venue with its balcony, loge, and orchestra sections forming one ascending curve. It had Rizal’s signature on its fly tower and also housed a restaurant and coffee shop called Leila’s.

The theater had become the favorite destination of residents from exclusive subdivisions for over three decades before it was demolished towards the end of the 20th century. The site is now occupied by the five-star Makati Shangri-La Hotel. 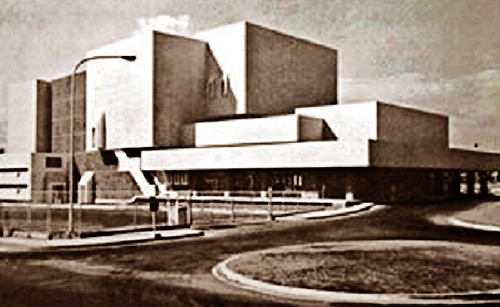 Once a popular alternative to the Rizal Theater, this landmark was a venue for movie premieres and also housed the Pancake House restaurant from the 1970s up to the 1980s.

The theater—designed by Carlos Arguelles—was located at the corner of EDSA at the Magallanes Interchange. It had a modernist blocky-“brutalist” massing reminiscent of the CCP. In contrast, the Rizal Theater had an international style massing that was popular during the '50s.

Just like other unfortunate landmarks in Manila, the Magallanes Theater also met the wrecking ball in the early 1990s. 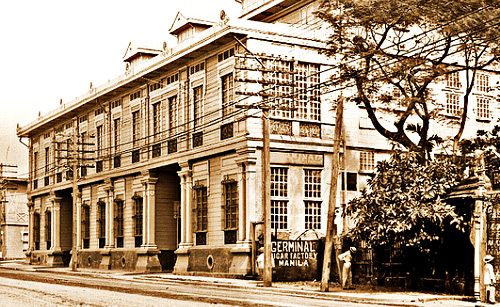 The Germinal Cigar Factory once stood at Calle Marques de Comillas in San Miguel, Manila, next to the Ayala Bridge. During its heyday, the company was considered "the largest establishment of its kind."

According to an article published in the Manila Times, the Germinal Cigar Factory had 35 cigarette machines on its second floor, each of which only required a single employee to operate. To keep up with the voluminous orders coming from the Philippines as well as Japan, China, and Australia, the factory had to produce as much as 3,000,000 cigarettes and 200,000 cigars a day.

The company, also one of the major sponsors of the first Manila Carnival, had Dr. Ariston Bautista y Lin as its president. Lin also served as the head of the Philippine Medical Society as well as executive of several charitable organizations in the county.

Read the full article, "20 Beautiful Old Manila Buildings That No Longer Exist" on Filipiknow.net. Minor edits were made by the SPOT.ph editors.

Filipiknow Nostalgia Old Manila Buildings
Your Guide to Thriving in This Strange New World
Staying
In? What to watch, what to eat, and where to shop from home
OR
Heading
Out? What you need to know to stay safe when heading out