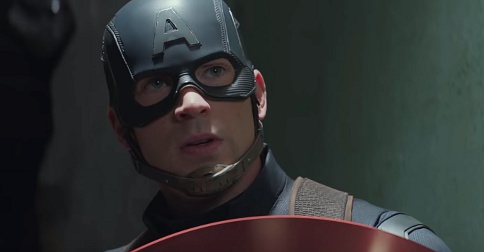 The trailer for Captain America: Civil War is finally here + more things you might have missed today

1. The trailer for Captain America: Civil War is finally here

The biggest box office event of 2016 is just around the corner! Marvel has finally dropped the first trailer for Captain America: Civil War, and it's just as exciting as you had hoped. The trailer features Captain America (Chris Evans) teaming up with Falcon (Anthony Mackie) to protect his best friend (and formerly brainwashed assassin) The Winter Soldier (Sebastian Stan) from prosecution. The film, which opens May 6, 2016, also features the rest of the Avengers and appearances from Paul Rudd's Ant-Man and Daniel Bruhl as supervillain Baron Zemo.

It's been over a week since Alma Moreno's infamous interview with Karen Davila, but the topic is still all the rage. In an interview, Vandolph came to his mom's defense, saying, "Karen should not choose whom to respect. She should treat her guests equally. The way she interviewed my mom was different." He also said that the journalist "humiliated" and let her "get rattled." Earlier, Karen defended her interview, saying that it was her job to ask hard questions.

Move over, Taylor Swift! Adele, Jennifer Lawrence, and Emma Stone were recently spotted having dinner in New York City on Monday night. According to reports, the three met up at a Mexican restaurant after Adele's interview on the The Tonight Show with Jimmy Fallon.

4. Gigi Hadid and Zayn Malik are rumored to be dating

According to reports, model Gigi Hadid and former One Direction member Zayn Malik are dating, and that they are "just seeing where it goes." The two were seen leaving the American Music Awards after-party together, but they have yet to officially make an appearance as a couple. The news comes after earlier reports said Harry Styles and Gigi "snubbed" each other during the awards show.

Congratulations are in order for Filipino-Australian Cyrus Villanueva, who won the seventh season of X Factor Australia held last November 24. Cyrus bested Jess and Matt, and Louise Adams. "I can't thank everyone enough,” the 17-year-old said. "I want to thank my beautiful family and friends, all the other contestants, the judges, Chris (Isaak), of course. I couldn't have had a better mentor than you." On November 23, he performed his audition song, “Earned It” by The Weeknd; “Jealous” by Nick Jonas for the finals; and “Stone,” his winner’s song, which will also be his debut single.

Popsters is not only what Sarah Geronimo’s fans call themselves, it’s now also an app! Xeleb Inc., the very first celebrity mobile games company in the Philippines, has tapped Sarah for its latest gaming app, Sarah G Popsters. Basically, it’s like those bubble shooter games, only with Sarah saying “Hooray!” and “Ang galing!” in the background. What’s in it for users? They can unlock Sarah’s hit songs like “Sa Iyo” and “Kilometro,” level after level. Other Filipino celebrities that have apps with Xeleb are Kim Atienza (Adventures of Kuya Kim), Isabelle Daza (Trip Ni Belle), Erwan Heussaff (Market Master), and Anne Curtis (Anne Galing!). You can download Sarah G Popsters on Google Play for free.

Three presidential candidates sent representatives on November 24 to attend a forum organized by the Disaster Risk Reduction Network Philippines. Sen. Miriam Defensor Santiago was represented by her sister, Dr. Nenalyn Defensor, who said that the senator plans to pass a bill seeking the protection of children during emergencies, including PWDs. Defensor also said Santiago wants an independent disaster risk reduction management agency. Liberal Party (LP) standard-bearer Mar Roxas was represented by Akbayan Rep. Barry Gutierrez. Gutierrez cited Roxas’ "Project Listo," a checklist on disaster preparedness, as well as the latter’s plans to have Cabinet secretaries who will be more hands-on during calamities. Sen. Grace Poe said in a statement read by her representative, Atty. Jing Mendoza, that she would push for the modernization of disaster-related agencies.

The Department of Transportation and Communications (DOTC) has stopped the new Land Transportation Office (LTO) order that requires professional license applicants to secure both a police and a National Bureau of Investigation (NBI) clearance. "We have wanted to pursue this reform for passenger safety and to upgrade the standards for PUV (public utility vehicle) drivers. However, there is also the economic side of things with respect to livelihood," explained Transportation Sec. Jun Abaya on November 24. Senate President Pro Tempore Ralph Recto suggested that the two agencies provide the LTO their database instead of applicants queuing in both. "Pwede naman file sharing na lang," he said. Sen. Franklin Drilon also cited that criminal charges are irrelevant to a person’s qualification to drive.

Sisig is undeniably one of the favorite pork dishes of Pinoys. Hot, chopped, and well-seasoned—just thinking about it brings hunger pangs. Whether for pulutan or ulam, here are the best sisig dishes in the Metro this year.

Whether you tuned in for the romantic love story or you loved the wondrous world it created, these fantaseryes captured our imaginations and had us glued to our screens. From mermaids to magical tattoos, we rank the best fantaseryes of all time.