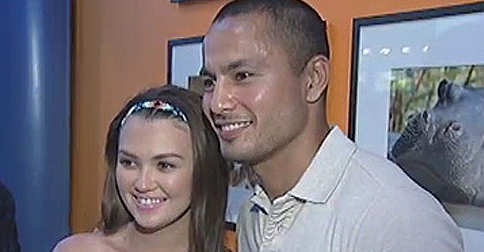 In an interview with PEP.ph, Derek Ramsay confirmed that he and his ex-girlfriend, Angelica Panganiban are back on good terms. "It’s something in my life that I’ve been hoping...praying for na magkaayos kami, magkabati kami," he admitted. "Kasi six years is six years." When asked about the rumors of Angelica and John Lloyd Cruz's breakup, he denied the reports, saying, "That’s not for me to get into details. Ang alam ko lang, hindi sila [hiwalay]."

Oscar-winning actor Jamie Foxx made headlines on Thursday after he pulled a man from a burning car after it crashed into a ditch. According to the California Highway Patrol, the car of 32-year-old Brett Kyle came off the road, rolled over multiple times into a ditch, and caught fire while he was trapped inside. Foxx reportedly heard the crash from inside his house, called 911, and used large scissors to break the window, cut the seatbelt, and pulled Kyle out just moments before the car was engulfed in flames. "I don’t look at it as heroic,” Foxx told reporters. "I just look at it like, you know, you just had to do something."

Eat Bulaga host Paolo Ballesteros does it again with his latest makeup transformation, this time as Miss Universe 2015 Pia Alonzo Wurtzbach. Paolo posted his completed imitation of the Filipina-German beauty queen on his Instagram account yesterday, January 20, which has already gathered nearly 30,000 likes as of writing. Just last week, he also did a makeup transformation of Miss Colombia Ariadna Gutierrez.

Bad news, Star Wars fans. It looks like you're going to have to wait a little longer to find out what happens with Rey and Luke Skywalker. Disney has reportedly pushed Episode VIII from May 2017 to December 2017 to make way for the new Pirates of the Caribbean movie (starring Johnny Depp, Javier Bardem, and Geoffrey Rush). While you're waiting for director Rian Johnson's take on the Star Wars universe, you can still look forward to the spinoff, Rogue One, which is set for December 16 this year.

6. Smart workout pants could replace the need for a yoga instructor

Have you ever thought you liked yoga but the feeling wasn’t mutual? Meditating can be hard when you’re always worried about your form, and you can say goodbye to becoming a yogi. Don’t fret, because a pair of yoga pants is here to help. Wearable Experiments’ Nadi Smart Fitness Pants vibrates when it senses your form is incorrect and will also slowly guide you into the correct pose. When you’ve nailed that pose, you’ll be greeted with an “ohmm.” The pants can last 25 washes, so barely a month, if you practice yoga every day. It debuted at the Consumer Electronics Show in Las Vegas this year and will be available for pre-sale in May.

It seems the inmates of the New Bilibid Prison have been having a lot of fun. The 13th raid on the country’s most notorious prison center uncovered a swimming pool on the rooftop of a kubol in the New Bilibid Prison (NBP)’s Medium Security Compound. NBP Supt. Richard Schwarzkopf Jr. said he was puzzled how the pool was constructed even as a watch tower was located just a few meters away. He concluded that this might have been the result of connivance between the inmates and the prison guards. The swimming pool was immediately demolished. Other kinds of contraband confiscated were high-end gadgets, stoves, refrigerators, bladed weapons, and suspected shabu stashed inside toothbrush cases.

The leadership of the House of Representatives is set to vote on the approval of the proposed Bangsamoro Basic Law on January 27, 16 months after congressional deliberation on the bill started. “We have set the voting on the 27th because we have to transmit it to the Senate,” chair of the House ad hoc committee on the Bangsamoro Basic Law (BBL) Rep. Rufus Rodriguez said. He added that the bill can only be put to a vote if there’s a quorum in the House. He said he expects P-Noy to issue a certification of the bill as soon as possible so the House can approve it subsequently on second, as well as the third and final reading.

Art Fair Philippines has become one of the most-awaited art events in the country. In a way, contemporary art is like a box of chocolates—you never know what you’re going to get. But even if you’ve already resolved to go to the fair, here’s a sneak peek of what this year’s featured artists have in store for you! We kid you not, they are mind-blowingly good.

For many, steaks are often a luxury, something you have on celebratory or festive occasions. Gone are the days when a slab of beef would set you back a couple thousands. We're showing you 10 places to satisfy your beefy cravings for under P500.