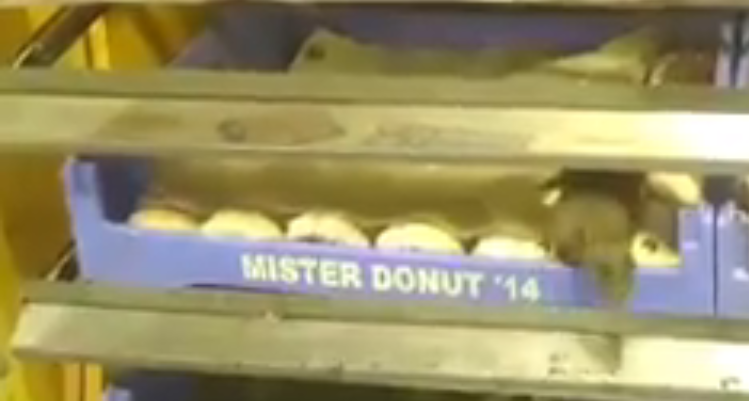 We hope you had breakfast elsewhere.

(SPOT.ph) Another “rat incident” has been making the rounds on social media and this time it involves a popular donut chain located at MRT stations.

The 14-second video was posted online by Fanboy SEO which showed a large rat nibbling on donuts inside the glass display.

The group alleged that the Mister Donut kiosk in question was the one located at MRT Quezon Avenue station.

Many netizens expressed their disgust while some pointed out that the stall seemed to be closed.

This prompted others to speculate whether the video was a “sabotage” attempt against the donut brand which has branches all over the Metro.

Just last month, a woman also complained after she claimed to have discovered a rat inside the coffee beverage she ordered from a Starbucks branch in Mandaluyong City.

Ma’am, my name is Cherry Pena, and I am writing on behalf of Mister Donut Philippines. This is with regard to the video of a non-operational Mister Donut kiosk at an MRT Quezon Avenue station (MD MRT Q. Ave) posted on SPOT.ph.

We would like to sincerely thank you for allowing us this opportunity to shed light on this matter.

While posting of the video may encourage officials of the Metro Rail Transit Corporation (MRTC) to act swiftly and address the issue of infestation of non-operational/closed MRT kiosks and shops, the same may have unintentionally caused damage to our brand.

MD MRT Q Ave is a franchise store and was not operational at the time the video was taken.  Under normal circumstances non-operational shops should not bear any Mister Donut branding.

For your understanding, starting January 1, 2016, we were informed by our franchisee that, all MRT kiosks, including Mister Donut shops, were not given access permit to operate by MRT3-DOTC.  The aforesaid access permit has always been issued by MRT3-DOTC on a monthly basis and this action of not issuing the access permit for January 2016 was a sudden directive from MRT3-DOTC and that even shop personnel were not allowed to retrieve items and goods.

Leftover Mister Donut products, which are normally picked-up the following day, were not allowed to be retrieved by MRT3-DOTC. Thus, when the said video was taken, the subject shop had been closed for more than a month and a half already. At that point, the shop was still off-limits to its personnel, even for cleaning. The MRT3-DOTC security personnel refused access to stall tenants’ shop personnel.

After the video broke out, the Mister Donut franchisee requested permission from MRT3-DOTC security personnel to retrieve the leftover donuts and to clean the shop citing pest infiltration, but his request was denied by the station supervisor of MRT3-DOTC. It was only after several appeals and explanation, that pest infiltration might affect the train passengers, permission was granted. However, the permission granted by the MRT3-DOTC security personnel was only for the retrieval of the leftover donuts and did not allow cleaning of the shop or removal of signage/logos.

We are told that to date, all shops in the MRT stations remain closed and the issue on the issuance of access permits is pending with MRT3-DOTC.

While Mister Donut holds its franchisees to the highest standards of quality, however, we were unable to require strict compliance because of the situation above-described. Undoubtedly, the video, made possible only by the peculiar circumstances, unjustly damages our brand.

We can only hope that the video can be viewed in this context, but sadly our reputation has already taken a hit. Unfortunately, netizens do not usually read the text when watching videos, but we hope that SPOT.ph can help us find a responsible solution for this situation.

Thanks and best regards,