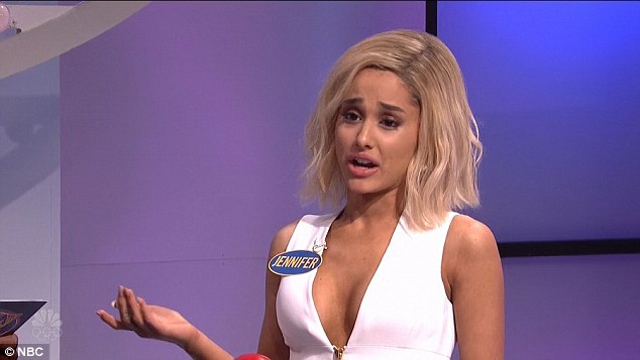 The Eagles call it quits, Jejomar Binay promises to do better in his campaign, and more.

Ariana Grande might be best known for her high-pitched vocals, but before she started performing in stadiums, she was a series regular on Nickelodeon sitcoms like Victorious. She busted out her comedic chops in the latest episode of Saturday Night Live, where she perfectly impersonated Jennifer Lawrence, mannerisms and all. In a separate sketch, she also did impressions of pop divas like Rihanna, Whitney Houston, and Shakira.

3. Don Henley says that The Eagles are splitting up

Weeks after the sudden death of The Eagles' co-founder Glenn Frey, band member Don Henley has announced that the band is splitting up. The Eagles paid a musical tribute to Frey at the 2016 Grammy Awards, but according to Henley, that was their "final farewell" performance. "I think that was probably it. I think it was an appropriate farewell," he told BBC.

Ryan Gosling continues to give fans more reasons to swoon. While on a drive with his girlfriend, actress Eva Mendes, the actor nearly hit a dog with their car while cruising down a California highway. He reportedly jumped out of the car to save the dog and return it to its owner. This isn't the only time the actor had a heroic moment: He previously broke up a street fight in New York, as well as saved a reporter from an oncoming cab.

Gaining 100 million users in just nine months, Facebook Lite proves itself to be the fastest growing version of the social network. According to Inquirer.net, Facebook declared on March 9 that they had topped 100 million active users. Facebook Lite consumes less data and resources, being an Android Application Package that is less than 1 MB in size, allowing people with slow Internet connection to download it in a jiffy. The Philippines is mentioned as one of the top five countries that uses the app, together with Brazil, India, Indonesia, and Mexico.

A Twitter user addressed a question for the Swedish Health Minister Gabriel Wikström, saying “My neighbors are once again having noisy sex. You’re my only hope: Could you ban risqué exercises after 10 p.m.?” To the Twitter user’s surprise, the minister responded with "Sounds nice for them, I think. Good for their well-being and thus public health as well." The minister talked to The Local about his concerns regarding the country’s declining sex rate. “If it had been down to free choice, it wouldn’t have been a problem—obviously the state shouldn’t tell people how often to have sex—but it is often linked to stress, pressure, and people feeling they don’t live up to a certain body ideal. That’s a problem and it will lead people feeling even worse. We’re humans, we need intimacy,” Wikström expressed.

7. Binay plans to step up after latest SWS poll

After presidential aspirant Grace Poe overtook him in the Social Weather Stations pre-election survey, Vice President Jejomar Binay vowed to do better in his campaign. He referred to the survey as a “wake-up call.” “For whatever it may be for, 'yong survey parang wake-up call sa akin,” Binay said to the crowd during a conference in La Union. But the presidential candidate claims not to be worried, as he is greeted with warmth on the campaign trail. “Baka nanunumbalik ang 2010 na kampanya. Eh ang layo ng diperensya ng sinu-survey dun sa reality,” Binay said, looking back on the 2010 elections where he won the vice presidential race despite not having placed first in the surveys.

“The Commission on Elections (COMELEC) should show not only the Supreme Court but also the entire nation why it’s impossible, not merely difficult, for it to comply with the giving of paper receipts to voters,” said Sen. Aquilino “Koko” Pimentel III, who chairs the Senate committee on electoral reforms and people’s participation. “Without any such well-studied time and motion study, the COMELEC is merely engaging in fear-mongering and should stop such a practice,” added Pimentel.

There's a good reason why southeners of the Metro never want to leave: They have everything...and then some! For a treasure trove of good eats, take a trip down south and try something new!

The country wouldn’t be the same without these formidable women. After all, their men wouldn’t have changed—and made—history without them.