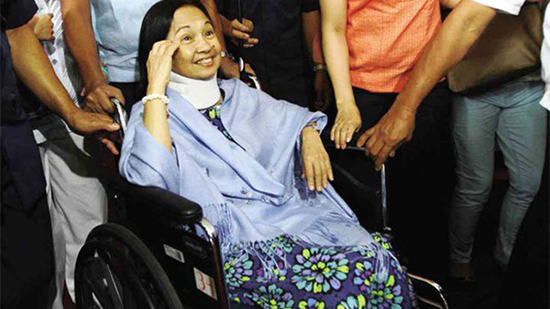 (SPOT.ph) The Supreme Court of the Philippines granted former President Gloria Macapagal-Arroyo's petition seeking the dismissal of her remaining plunder case. This was confirmed by Supreme Court spokesperson Theodore Te in a press conference on Tuesday afternoon, July 19. The case is about the alleged misuse of P366 million Philippine Charity Sweepstakes Office fund from 2008 to 2010.

The dispositive portion of the said decision reads as follows: "WHEREFORE, the Court [...] DISMISSES Criminal Case No. SB-12-CRM-0174 as to the petitioners GLORIA MACAPAGAL-ARROYO and BENIGNO AGUAS for insufficiency of evidence; ORDERS the immediate release from detention of said petitioners; and MAKES no pronouncements on costs of suits." The Supreme Court voted 11-4, with the dissenting votes cast by Chief Justice Maria Lourdes Sereno and Associate Justices Antonio Carpio, Marvic Leonen, and Alfredo Benjamin Caguioa.

Benigno Aguas, Arroyo's co-petitioner, was the Budget and Accounts Manager of the Philippine Charity Sweepstakes Office (PCSO). All the other co-accused and former executives of the PCSO were granted bail, while Arroyo remained in detention at the Veterans Memorial Medical Center in Quezon City. She's been on hospital arrest since 2012.

"The innocence of one is the innocence of all," said Presidential Spokesperson Salvador Panelo in a short interview with Inquirer. GMA News Online reported that former senator Panfilo Lacson supported the ruling for humanitarian considerations, "[Arroyo] has suffered enough, having spent six years in detention under an extremely difficult physical condition", he said. A dismayed Sen. Leila De Lima, on the other hand, asked why the Supreme Court needs to decide on the plunder case when it is being heard in Sandiganbayan, according to a report by DZMM Teleradyo.

Despite the six-year detention and plunder charges, Arroyo earned a second term as congresswoman for Pampanga's second legislative district after the mid-term elections in 2013.

Plunder Supreme Court Pcso Arroyo Macapagal Metro Manila News
Your Guide to Thriving in This Strange New World
Staying
In? What to watch, what to eat, and where to shop from home
OR
Heading
Out? What you need to know to stay safe when heading out