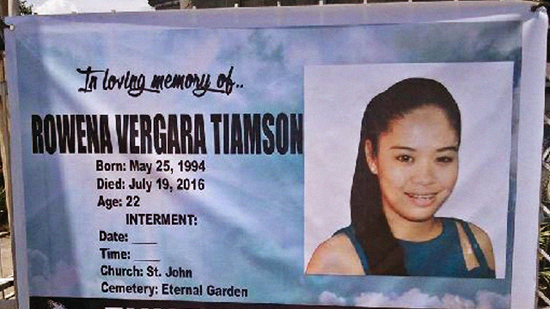 (SPOT.ph) Rowena Tiamson was a Mass Communications student at Colegio de Dagupan. She just turned 22 on May 25 and was looking forward to graduating in October. She was a consistent honor student, had a great voice and regularly joined singing contests, and was also an active church choir member. The one adjective that everyone associated with her was mabait.

Last week, though, Tiamson became one of the victims of vigilante groups that identified themselves as the Dagupan Death Squad and the Pangasinan Death Squad. These groups are self-styled executioners who claim to be helping the government in its all-out war against drug pushers and drug addicts.

But while President Rodrigo Duterte and Philippine National Police Director Gen. Ronald “Bato” dela Rosa have repeatedly stated that the government does not condone summary executions or extrajudicial killings, there have been people who have taken matters into their own hands. Vigilantes have interpreted the government's intensified anti-drug campaign as their license to kill.

Rowena's family and friends believe she was mistakenly targeted by the vigilantes. Aside from her friends and family attesting to her innocence, the Philippine National Police (PNP) confirmed that Rowena was not among the people on their watchlist of drug peddlers and users.

Unfortunately, even the PNP's statement can't bring back Rowena, whose body was found dumped in Barangay Parian, Manaoag. Rowena had been hogtied and shot in the head. A piece of cardboard bearing these words was right beside her remains: "Huwag tularan. Pusher (Don't be like her. She is a pusher)."

While Rowena's death is being tagged as a case of "mistaken identity," it can't be denied that it exposes everything that could go wrong when people become self-appointed law enforcers. The PNP says they are doing all they can to stop these vigilantes from executing people at will. Then again, maybe vigilantes have become addicted to the power that comes with being able to hunt down people whom they believe to be criminals—due process be damned.

Police added that they have also not discounted the possibility that drug syndicates are also sending out hired gunmen to kill those whom they think might compromise their operations.

That said, the perception these days is that summary killings are all drug-related.

Rowena is just one of the victims of recent summary executions who don't fit the profile of drug peddlers or drug users.

But while the two other deaths have not been confirmed as the work of vigilantes nor officially deemed as drug-related, Rowena's case definitely proves that one's innocence doesn't provide enough protection from mistakes made by those hell-bent on shooting to kill.

Metro Manila News Duterte
Your Guide to Thriving in This Strange New World
Staying
In? What to watch, what to eat, and where to shop from home
OR
Heading
Out? What you need to know to stay safe when heading out