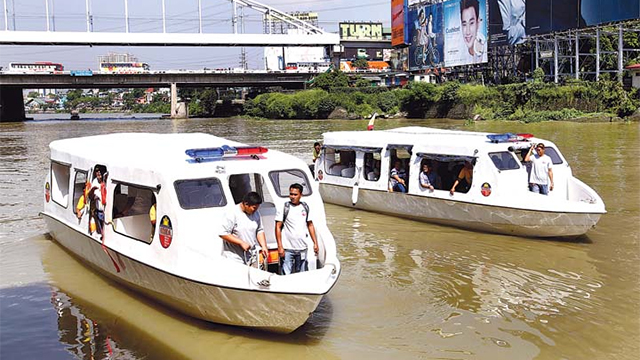 (SPOT.ph) Most employees and students hate Mondays, not only because it’s the start of another hectic week, but because it also means spending a lot of time just sitting in traffic. In an effort to ease the build up along our major thoroughfares, the Pasig River Ferry Service added two brand-new boats to its fleet. The launch took place today, October 24, at the Guadalupe Ferry Station in Makati City.

During the inauguration, Metro Manila Development Authority General Manager Thomas Orbos urged the public to support the Pasig River Ferry Service, the only water-based form of transportation in the Metro. “The more you support it, the more it becomes viable,” he added. Additional routes are also being studied to extend the service to Marikina and Rizal.

The new ferries, made by Cebu-based Stordal Marine Corporation, can accommodate 15 passengers each. They are welcome additions to the 12 boats operated in the Pasig River terminals: Pinagbuhatan and San Joaquin in Pasig City; Guadalupe and Valenzuela in Makati City; Hulo in Mandaluyong City; PUP Sta. Mesa, Sta. Ana, Lambingan, Lawton, Escolta, and Plaza Mexico, all in Manila.

The project was shut down in 2011 and was revived in 2014 as an alternative means of transportation. It has since accommodated about 500 passengers a day. It operates from 6 a.m. to 6 p.m., Mondays to Sundays. Fares range from P30 to P95.

Metro Manila News News Pasig River Ferry Service Pasig River
Your Guide to Thriving in This Strange New World
Staying
In? What to watch, what to eat, and where to shop from home
OR
Heading
Out? What you need to know to stay safe when heading out