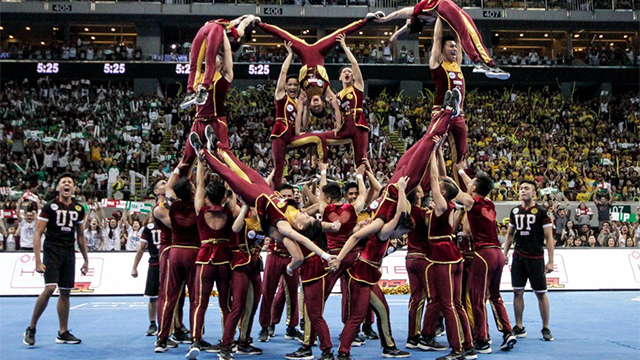 Who do we root for now? 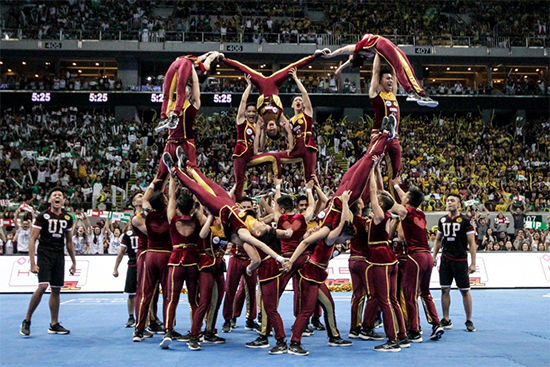 (SPOT.ph) Organizers of the 2016 UAAP Cheerdance Competition released today, October 26, the order of performances of the seven contending university-based cheerdance groups for November 19, 2 p.m. at the Araneta Coliseum. Yes, you read it right, only seven schools will be fighting for the title as the University of the Philippines Varsity Pep Squad (a.k.a. UP Pep Squad or UP Pep) decided to not be part of this season's competition. 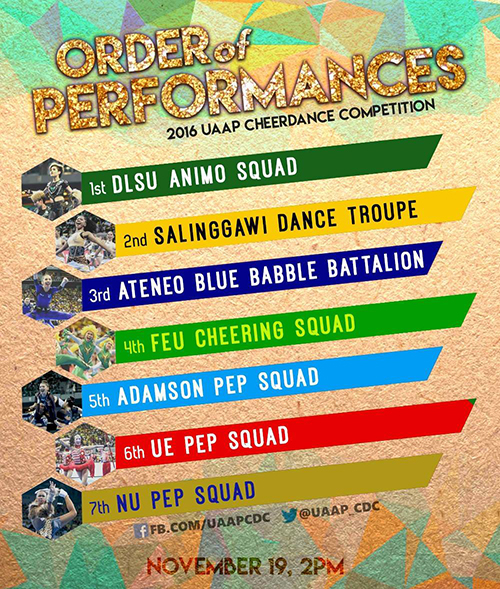 Less than an hour after the order of performances was released, the UP Pep Squad came out with an official statement clarifying their position regarding the matter through their official Facebook page. "Last year was one of the most striking seasons in the history of our team. If you have been following our story since, thank you for your interest and patience. Finally, we can share the news to those who have been wondering that, regretfully, we will not be part of this season’s UAAP Cheerdance Competition," the statement started.

In 2015, the squad filed a protest questioning the results that had National University defending its title and University of Santo Tomas finishing second. UP Pep Squad placed third. In a letter dated October 5, 2015, UP Diliman Chancellor Michael L. Tan wrote to the UAAP Cheerdance Committee: "I am endorsing the letter, convinced that unless all these questions are answered, the future of cheerdance as a sport, and UAAP as a university sports federation, will remain under a cloud of doubt."

The committee replied "that the results of the 2015 UAAP CDC are valid" without clarifying any of the examples pointed out by UP Pep Squad Coach Lalaine Juarez-Pereña as "gross disregard for the competition criteria (provided in the UAAP Season 77 Cheerdance Competition Rules and Regulations)." Her review highlighted stunts that did not abide by the competition rules as well as what should have been deductions for the violations and mistakes in routine. She also pointed out "questionable techniques" through illustrations. "We seek an explanation as to whether the board of judges put more premium on quantity over proper technique," she asked further. In an interview with GMA News Online in October 2015, Pereña said: "Kung di sinagot, then UP will be out of UAAP CDC next year."

That next year is now and the UP Pep Squad didn't get their answers. "Reared in the institution we represent, we abide with our principles of honor and integrity, and stay true to our word of foregoing with the competition, should the same organizers be hired to handle the event again," they said in their official statement.

The team is now focused on their other commitments, including their participation in this year's Asian Cheerleading and Dancesport Competition. The team took home five medals from the Cheerleading World Championships in Berlin last November 2015.

Let's all remember this moment when our UP Pep Squad shared their hearts with all of you #utakpuso #paninindigan #gr8ful pic.twitter.com/IqcFHaqlQ6

"What matters is knowing what you stand for, what you represent, and the freedom to act on it. What matters is knowing your capacity to endure, your value and how your worth is being measured. And again we are reminded, gratefully, that we are measured in love," the team said in a final note. UP Pep Squad fans are equally sad and proud about this news; even the UP Bonfire can't help but shed a tear.

: On behalf of the UP community (wow, may authority ako), please fight for us, UST and FEU. Always remember that NU can't sit with us.

Up Pep Squad Cheerdance Uaap News Metro Manila News
Your Guide to Thriving in This Strange New World
Staying
In? What to watch, what to eat, and where to shop from home
OR
Heading
Out? What you need to know to stay safe when heading out