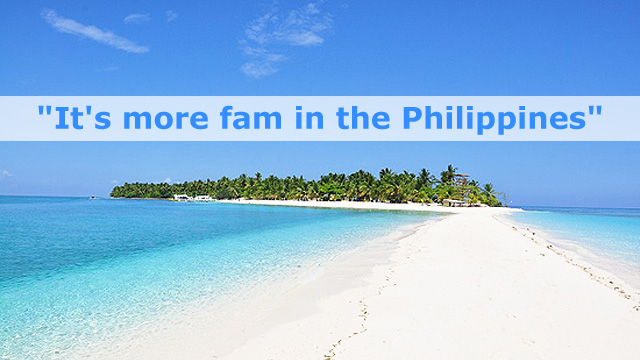 What do you think?

(SPOT.ph) When the Department of Tourism announced in September 2016 that the agency is ditching the "It's More Fun in the Philippines" campaign which was launched 2012, people weren't too happy. Tourism Sec. Wanda Teo also received feedback from an international tourism official saying that it was "a good slogan" and just needed an "upscale."

Fast forward to January 26, 2017: The new tourism ad was rolled out through the Department of Tourism Facebook page and Tourism Undersecretary Kat De Castro's Facebook account. Produced by McCann Erickson, it features the words of well-known travel blogger Jack Ellis, "When you're with Filipinos, you're with family" and answers the question posed by Teo in November 2016, "Why is it more fun in the Philippines?"

“You focus on the traits of the Filipinos. Other countries also have beaches, places to go shopping or eat, but Filipinos are different, you have to show that so we focus on that now,” she explained about the new campaign "When with Filipinos."

As expected, this change got mixed reactions from the public. We round up some of them.

So, when travelers come to the PH they'll be greeted by magical mammies living the forest handing out food?

"It's more fam in the Philippines"

It also got a bit political for some.

When you're with Filipinos, make sure he is not a police or your family is in danger. https://t.co/Q68Ipn4qxP

Plus comments on gender sensitivity...and other things.

What else can you add to the statement "When with Filipinos..."?

It’s More Fun In The Philippines When With Filipinos Tourism Miss World Philippines 2018 Travel
Your Guide to Thriving in This Strange New World
Staying
In? What to watch, what to eat, and where to shop from home
OR
Heading
Out? What you need to know to stay safe when heading out