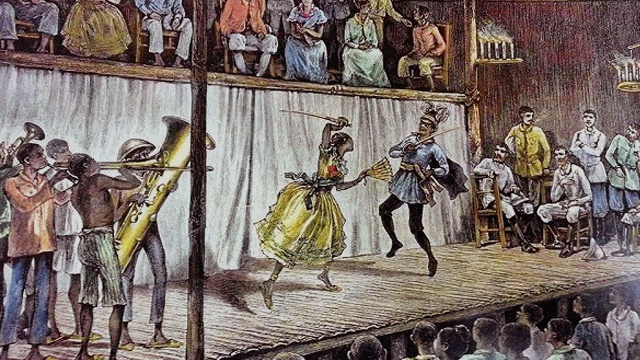 What Did Filipinos Do Before There Was Television?

Football was a big deal.

Unless you were one of the elite, life in the Philippines before the 20th Century was not exactly a bed of roses. The indio constantly dealt with hunger and discrimination. The wealthy class, on the other hand, enjoyed all the luxuries within their reach. People back in the day had a very different idea of ‘entertainment.' So if you can’t survive a week without Netflix or Facebook, this era would have definitely bored you to tears.

Let’s look back at some of the fascinating ways our forefathers entertained themselves long before television and the Internet shortened our attention span. 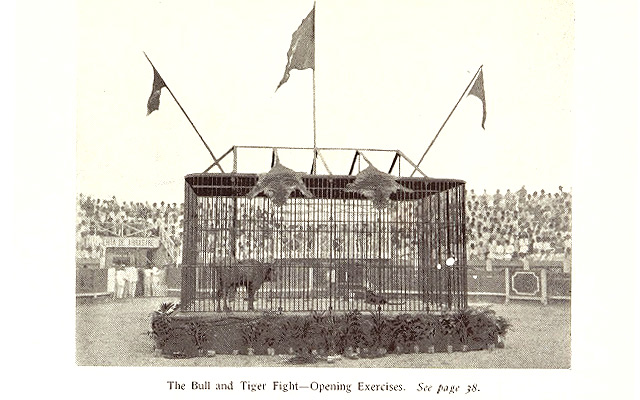 Watched animal gladiators destroy each other

In contrast to the more “cultured” elite who patronized the theater and opera house, leisure for regular Filipinos usually revolved around cockfighting or the less popular bullfighting. Cockfighting peaked during the Spanish colonial period, so much so that it became a regular source of income for the government. Bullfights, meanwhile, had a smaller following; most people considered it as a knockoff of its Spanish counterpart. Not surprisingly, both the animals and the bullfighters often gave subpar performances.

Short-lived as it was, bullfights, especially those held in the suburb of Ermita, attracted many curious eyes and greedy betters.  Despite making a brief comeback in the 1950s, bullfighting never returned nor cemented its place in Filipino culture. 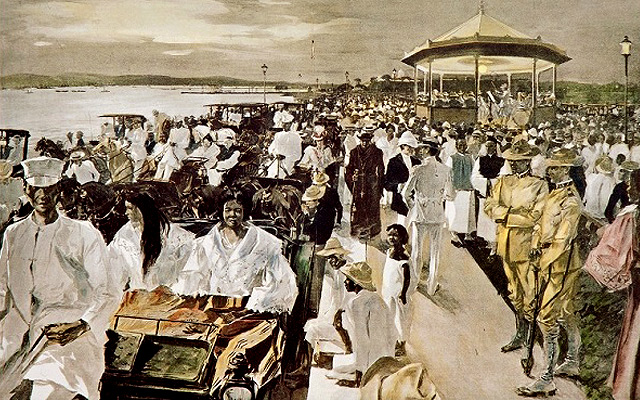 Went to Luneta for world-class concerts

The Spanish-era Luneta was not only known as a place of execution. It was (and still is) a place of leisure where people could unwind and witness the sunset after a hard day’s work. What makes the 19th Century Luneta different from the Luneta of today is the presence of a bandstand. World-class musicians, such as the legendary Philippine Constabulary Band, once performed in this area to serenade people strolling at the park.

Listening to band concerts was one of the reasons why people frequented this place. Luneta gave them an incredible opportunity to hear soothing music, long before portable music players were even considered possible. 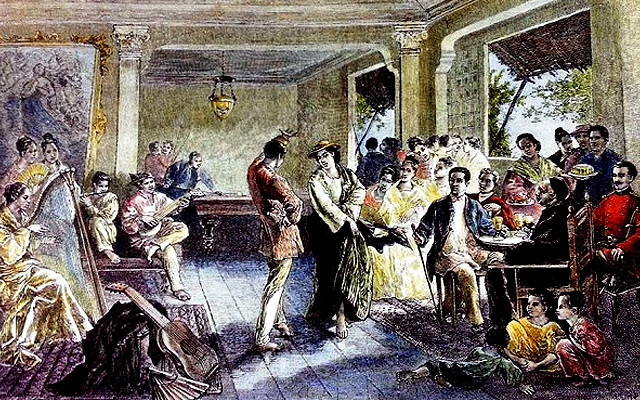 Entertainment for Manila’s elite was ‘social entertainment.’ This could mean attending family reunions during which each of them showcased refined tastes and skills in music, poetry, dance, and visual arts. Sometimes, they would also be invited by someone to attend events where they could hobnob with other social circles. These included the tertulia, which is a simple get-together with a touch of poetry and music; bailes, or dances for formal balls; and bodas, a wedding celebration with artistic or literary overtones.

Events like these were usually held on the second floor of the host’s European-inspired house. These were also an opportune time for different families to prove they had a sense of urbanindad, defined as “a delicacy in taste, graceful and studied gestures, extreme politeness, a desire for knowledge, artistic accomplishment, stylish attire, knowledge of world history and geography, and a fancy home.” 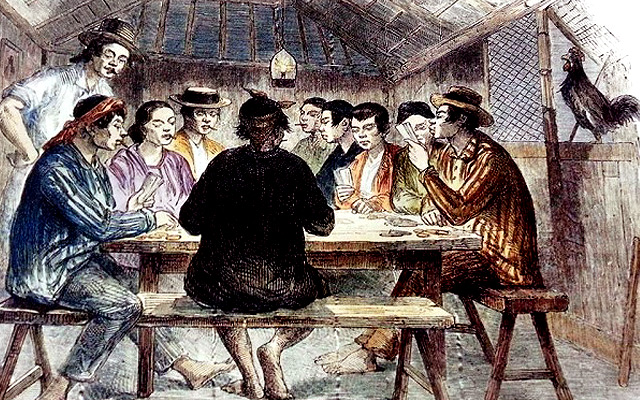 Apart from cockfighting, Filipinos in the 19th Century often engaged themselves in panguingue. This is a card game similar to rummy, usually played with eight or 10 decks. Such was its popularity during the Spanish colonial period that it was regularly depicted in various illustrations and artworks from that era. One of them was drawn by Charles Wirgman, a British artist who visited Asia in the 1850s as a special correspondent for the Illustrated London News.

What probably started as an innocuous activity gradually became a full-blown vice. In fact, one newspaper editorial perfectly demonstrated how gambling had corrupted the Filipina through a drawing that shows her head stuck in a trash bin labelled “panguingue” with all the evils leaking from it, namely: estafa (fraud), robo (thievery), and adulterio (adultery). 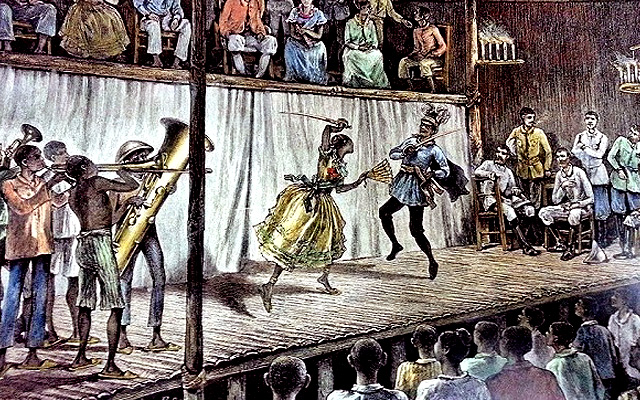 The Spaniards hated the Moros (a term referring to the Philippine Muslims) so much that they wrote and popularized a play just to demonize them. Known as the moro-moro (or linambay in Cebu), this 19th Century comedy was usually performed during a week-long celebration leading up to the town fiesta. It reached the height of popularity before it was replaced by bodabil, cines, and zarzuela.

The play, usually held for three to nine days and attended by Filipinos from different social classes, was not just a simple theatrical performance. It became a tool for Spaniards to reinforce the superiority of Roman Catholicism over Islam, and the idea that the only way to salvation is through conversion to the colonizers’ religion.

Once Spanish colonial rule was over, the popularity of moro-moro declined as well. Although the tradition continues to this day in some parts of the country, this comedy is now generally perceived as a dying art, a memento from an era that once created division between Filipino Christians and Muslims. 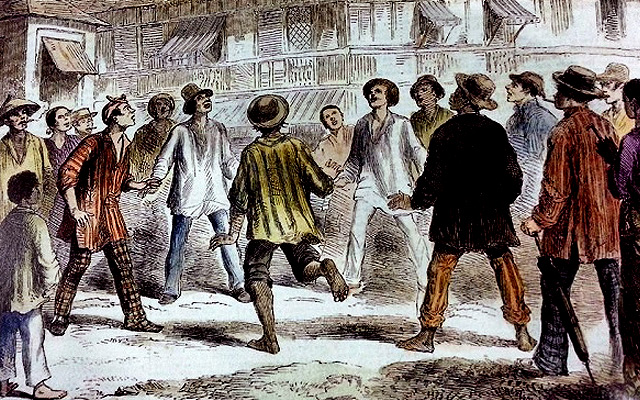 Played football in the streets

Long before we started our love affair with basketball, Filipinos were actually football aficionados. In fact, football was our primary sport during the Spanish colonial period, and one of the greatest football players in history—none other than Paulino Alcantara—was born in Iloilo City.

Charles Wirgman, a British artist who once visited Manila in the 1850s, was amazed by how Filipinos played the sport in the Manila streets. Even though football is one of England’s oldest games, Wirgman noted that he had “never seen it played with such dexterity as in Manila.”

Football's popularity started to decline as soon as the Americans took over the Philippines. Even the establishment of the Philippine Football Federation in 1907 and our victory in the Far Eastern Games didn’t deter it from fading into obscurity. 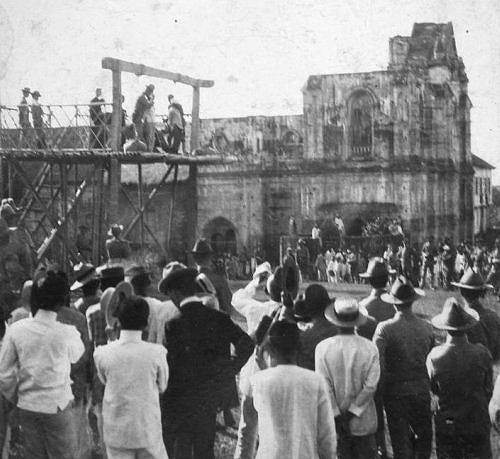 Back in the day, there was no event quite as intriguing as a public execution. It all started during the Spanish colonial period when various forms of capital punishment were introduced to the country, which ranged from burning and garrote to hanging and decapitation. When the Spanish Codigo Penal was enacted in 1848, it became clearer that the colonizers were serious in intimidating those who were trying to challenge their authority. It was revised during the American Occupation, with death penalty also imposed on those who committed murder, kidnapping, homicide, robbery, rape and treason, just to name a few.

Death penalty during these two era was administered both to punish the Filipino insurgents and warn the public about the consequences of breaking the rules. And what better way to achieve the latter than making execution a public spectacle?

Some of the famous personalities who met their end through execution were the GOMBURZA (garrote), propagandist and novelist Jose Rizal (firing squad), and revolutionary leader Macario Sakay.

City Life Filipiknow History Photos Luneta Spanish Era American Occupation Moro Moro Syndication
Your Guide to Thriving in This Strange New World
Staying
In? What to watch, what to eat, and where to shop from home
OR
Heading
Out? What you need to know to stay safe when heading out