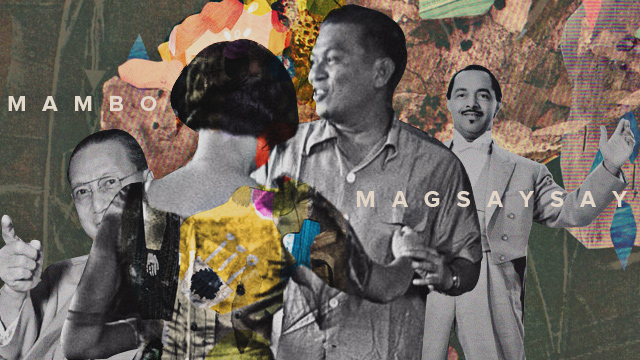 Magsaysay Didn’t Boogie But Boy, Could He Mambo

And his rivals said it was a national calamity.

(SPOT.ph) August 31 marks the birth anniversary of a great Ilocano (not the one you might be thinking), Ramon Magsaysay. Even as you’d tuned out in expectation of the long weekend, you probably picked up some news about the Magsaysay Awards, given out on his birth anniversary in a splendid annual ceremony that always makes the news.

But since you’re still in long weekend mode, let’s keep things light. In the Philippines, there’s more than the usual two things you can be sure of in life: death and taxes. The third is, campaigns during elections. Whatever political color you wear (or not), there’s one other thing you can’t ignore when campaign season rolls around. It’s the political jingle.

Now there’s a different, Urban Dictionary meaning to this word, but let’s stick to the oldie but goodie one most people know: a catchy song, usually for advertising purposes (the word itself means “to make a light clinking or tinkling sound,” or “to rhyme or sound in a catchy repetitious manner.”

Your grandparents might have heard of a band leader named Perez Prado (you can watch him perform in this clip), who would punctuate his music with yells. About 20 years ago, I was delighted to read, in the liner notes of one of his albums, a quote about the Philippines.

Some context. Perez Prado was the composer of the original "Mambo No. 5" which later got a second lease on life remixed as part of one of those flash-in-the-pan earworms, in this case, because of Lou Bega. The Mambo craze swept the Philippines in the 1950s and the President at the time was Elpidio Quirino. He was what you’d call an Old School kind of guy, belonging to the older generation whose idea of a wild and crazy time was dancing the tango instead of the waltz (you can actually watch him dance with a whole bunch of Manila Spaniards in Malacañan Palace). His opponent in the election of 1953 was no less than The Guy himself—Magsaysay.

Well, Quirino, in the Perez Prado album liner notes, was quoted as saying the Mambo craze sweeping the country was “a national calamity.” But of course. It was what kids liked, and it seemed kids weren’t going to write Quirino on their ballots. Instead, they were going for...Magsaysay, who decided what he should do is have a jingle—a Mambo.

Now it wasn’t a new idea, actually. Even before Magsaysay entered the scene, a sports columnist turned hard-hitting politician, the original Tough Guy in our politics (polo shirts, Ray-Ban glasses, cursing and getting into fistfights), named Arsenio Lacson. At one point President Quirino got so mad at him, he sent a tank into the streets of Manila to chase him down. The result was Lacson got elected Mayor of Manila. He had a political jingle—a "Lacson Mambo," don’t you know.

Someone in the Magsaysay campaign must’ve thought, we’ve got to play one of those Mambo songs for people. They’d already composed a march, titled "We Want Magsaysay," composed by a young up-and-coming guy named Raul Manglapus.

For the Ateneans among you, you might know that Raul Manglapus, besides being a senator, was also a pretty good amateur musician. He composed "Blue Eagle, the King," for example. Manglapus’ march was everything you could possibly want: It was rousing, rhythmic, and eloquent:

We want the bell of liberty

Ringing for us once more

We want the people’s will to be

Free as it was before!

We want our native land to lie

We want our nation guided by

Who’ll do the job and never rob

Only the man of destiny

can our freedom restore

This is The Guy for you and me

Except for one thing. It was hopelessly old-fashioned. The era of military marches was just too Old School. Sure, the Katipuneros had attacked Spanish forts led by marching bands. It’s not hard to be brave if you have a band crashing out "Alerta, Katipunan!" as you prepare to attack.

During the 1920s and 1930s, bands up and down the country in an era before radios and record players were in every home, memorized the " March," which was the political anthem of Manuel L. Quezon (it was so catchy at the time that during World War II, the Hukbalahap recycled it, giving it new lyrics for their cause).

But this was now the exciting 1950s! And so Manglapus went back to his piano and eventually banged out the "RM Mambo." Nice, someone must’ve said. It’s a “pure” Mambo, after all. But somehow not...catchy.

So again, back to piano Manglapus went and this time, he put together a classic that’s remembered to this day while most other political jingles are not: the "Mambo Magsaysay":

Everywhere that you would look

Was a bandit or a crook

Peace and order was a joke

That is that is why

You will hear the people cry

they voted in Lanao

Till Magsaysay showed them how

Too much people's money spent

But no honest government

If Magsaysay is president

That is that is why

We will hear the people cry

And even zanier was the "Mambo Magsaysay" in Ilocano, which must have been particularly delightful because the Ilocano from Zambales, Magsaysay, was running against the original Apo, his fellow Ilocano Elpidio Quirino. It had everything you could possibly want. Catchy lyrics in Taglish! A chorus everyone can sing! And so it stuck. It was so sticky, that during EDSA in 1986, June Keithley kept playing it from her Radyo Bandido perch overlooking Malacañang. The ghost of one Ilocano musically haunting another, get it?

Not least because Ferdinand Marcos in his time hadn’t bothered with pop music for political campaigns. When he was able to establish his New Society, he picked an old-fashioned march, the last hoorah of a musical form for public purposes.

If you’re a certain age, you will remember "Bagong Pagsilang" because you had to sing it in school:

But betcha it never put a smile on your face the way the "Mambo Magsaysay" still can! And in one sense, Magsaysay’s groove still grabs us—every three years, but like all mega hits, the copycats never quite capture the freshness of the original.

And for something serious, why not watch The Magsaysay Credo. You might learn a thing or two in just a few minutes. It’s enshrined in the Magsaysay Building along Roxas and is usually included in the program for the Ramon Magsaysay Awards.

A few of the songs mentioned (note that some may load more slowly than others):

Political Jingle Politics Magsaysay Elections Campaigns
Your Guide to Thriving in This Strange New World
Staying
In? What to watch, what to eat, and where to shop from home
OR
Heading
Out? What you need to know to stay safe when heading out