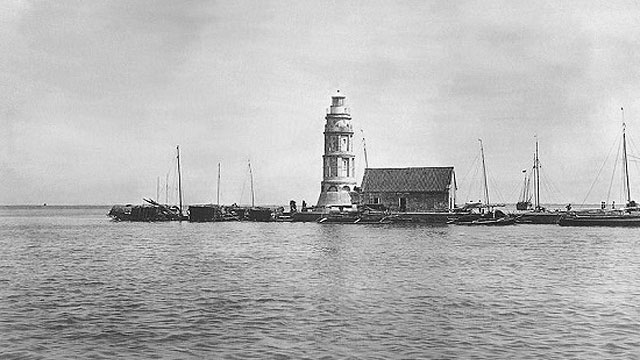 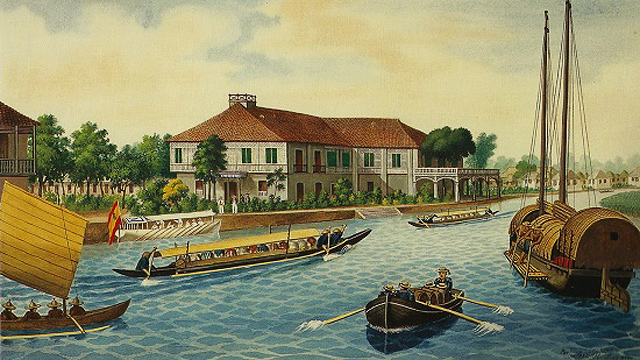 Believe it or not, the Pasig River was once considered pristine, majestic, and breathtaking. But that was before people started dumping their trash there. Whatever happened to the once-alluring river? Well, industrialization happened. And so were the drastic changes that came with it. Before we knew it, the entire river ecosystem went downhill in a manner that would have made our ancestors cry in disbelief.

But there’s still hope. There is, in fact, a foundation committed to bringing Pasig River back to life. And if that’s not convincing enough, perhaps these little-known facts about the river’s colorful past will make you want to clean it up, right now. 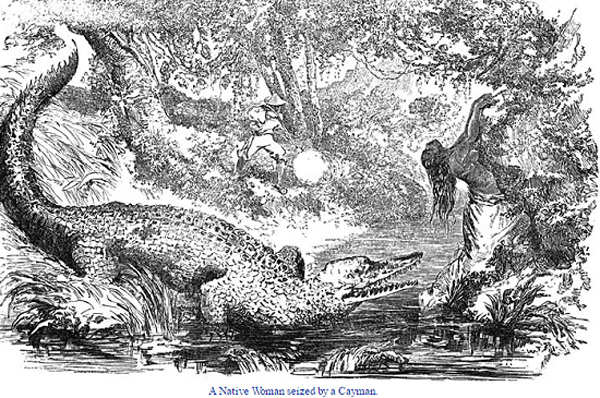 “A native woman seized by a cayman.”

Once there was a Chinese man who didn’t believe in the Catholic god. As he was plying the waters of Pasig River one day, the Chinese man spotted a huge crocodile swimming towards his boat. Out of desperation, he prayed to San Nicholas for help. At that very moment, the crocodile turned into stone, and the Chinese man became a believer.

The Buwayang Bato is just one of many legends born in the historic river. But believe it or not, stories like this often have real-life references.

True enough, history shows that crocodiles once wreaked havoc in the Pasig River. In his book Relacion de las Islas Filipinas, the Jesuit Fr. Pedro Chirino recounted how a 17th-Century Filipino chief grappled with a 36-foot crocodile from the Pasig River.

The huge freshwater reptile was eventually killed, so was the “smaller” 15-foot monster they also caught and ripped open, revealing the gruesome mix of human bones and heads inside its belly. 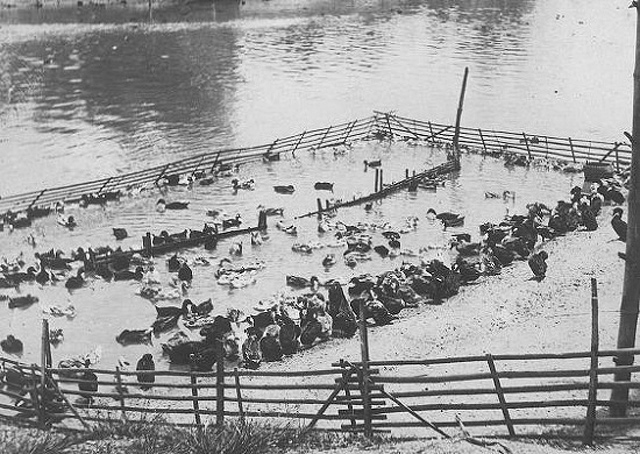 There was a time when ducks found the waters of Pasig River clean enough to drink and bathe in. In fact, a community of duck raisers is said to have blossomed from the banks of the river. The business thrived for many decades, specifically in the areas of Pinagbuhatan and Kalawaan where many families relied on ducks for their bread and butter. 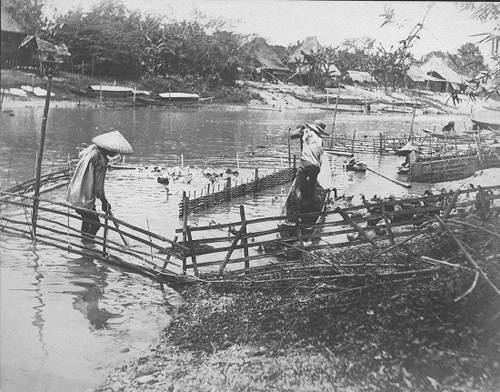 Sadly, it was the duck industry that took the biggest hit when the Pasig River deteriorated. Starting in the mid-1960s, river snails (“”) which were eaten by ducks became scarce—so was the unpolluted water necessary for these ducks to thrive.

One by one, duck raisers abandoned their business. And just like that, the industry that once provided thousands of Pasigueños with livelihood bid a final farewell. 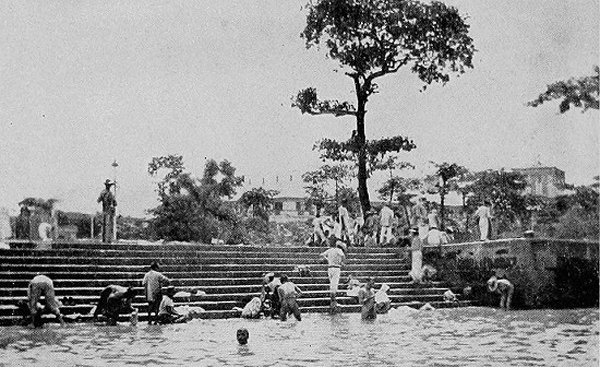 In India, bathing in the Ganges River is a holy ritual practiced by the Hindus. Although the river today is threatened by pollution, the water is tolerable enough for people to take a dip in it.

Our very own Pasig River used to be like this—a place where people could clean themselves and escape Manila’s sweltering heat. Some Manileños even brought with them their four-legged companions.

But as with other beautiful things that disappeared from Pasig River, public baths became extinct. By the 1950s, people stopped bathing in the polluted water. 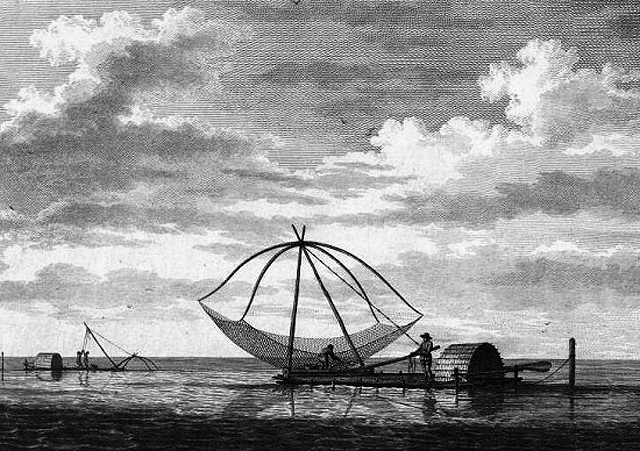 Back when fish were plenty, these bamboo rafts with weird-looking contraptions were a common sight in Pasig River. Old folks called it (or ), a traditional Filipino fishing raft composed of a giant net attached to long bamboo poles which were then fitted to the bamboo raft.

In El Filibusterismo, our national hero Jose Rizal let his imagination run wild when he described as an “insecure fishing apparatus which in their movements resemble skeletons of giants saluting an antediluvian tortoise.” 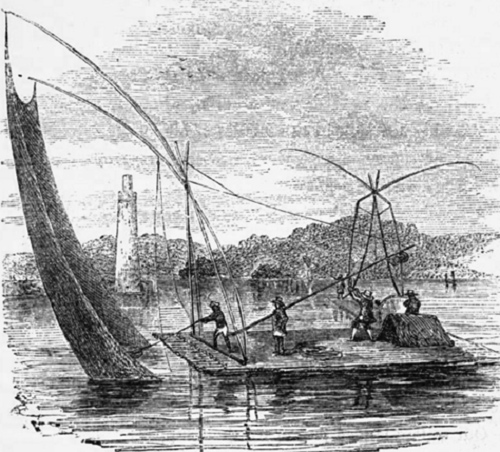 Odd as it may look, the giant net obviously made a lot of fishermen happy because it helped them catch more fish. In addition to that, the fishing contraption was set up in a way that made it easier to transfer it from place to place without the need of repeatedly spreading the net. All they needed to do was dip it into the river water and haul it up once it’s full of fish. 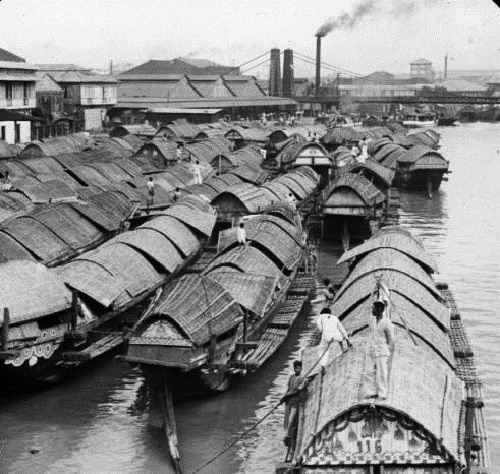 House Boats on the Pasig River, Manila, P. I. (The original slides are housed in McConnell Library’s Special Collections)

Anyone who has seen an old photograph of Pasig River should know what a casco looked like. It’s a flat-bottomed boat with a roof made of split bamboo or rattan. This traditional Filipino watercraft was used to carry freight and passengers throughout Manila and nearby provinces.

Little-known, however, was that these boats also became home to thousands of Filipino families who spent all their lives in the river. In his 1919 book Interesting Manila, the American writer George A. Miller gives us a glimpse of how these river people made use of their floating houses: “Over 15,000 people live on the cascos and lorchas that ply the waters of the river and its tributaries, all within the city limits. Thousands of children are born, grow, live and die on these floating cargo carriers, and never dream of any other world than that which floats about them and is towed from place to place..." 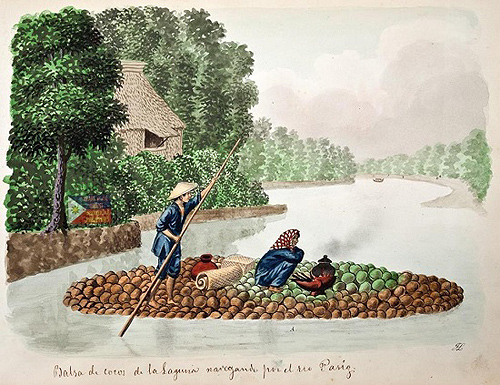 In the 19th Century, people in Laguna and nearby provinces relied on Pasig River to transport their goods to Manila. They would usually fill their cascos with their produce, varying from rice, sugar, and vegetables to wine, molasses, and baskets of fruits.

Coconuts, however, were a lot heavier and came in larger quantities. A single casco was obviously not built to handle such cargo. Either they would deliver the coconuts via carabao carts or follow what others were already doing—make coconut rafts. 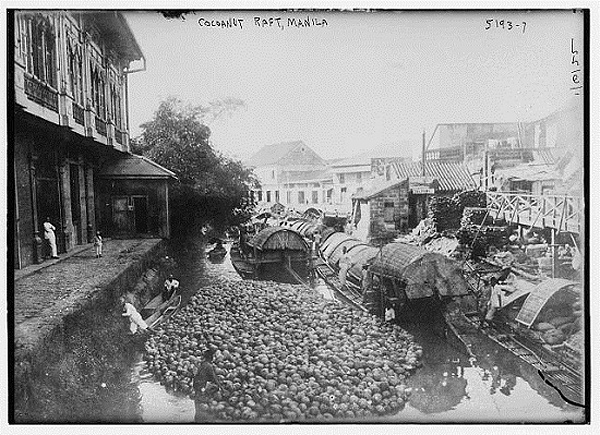 After forming a circular raft, the coconuts would float across Laguna de Bay and down to the Pasig River. With the help of estuaries throughout Manila, the coconut rafts would easily reach the mills where they’re processed into coconut milk and coconut honey, among other products.

However, these coconut rafts were not always reliable. In the end, it would all still depend on the weather. In 1906, for example, a strong typhoon in Laguna blew over the coconut rafts, scattering as much as 200,000 coconuts in the process. 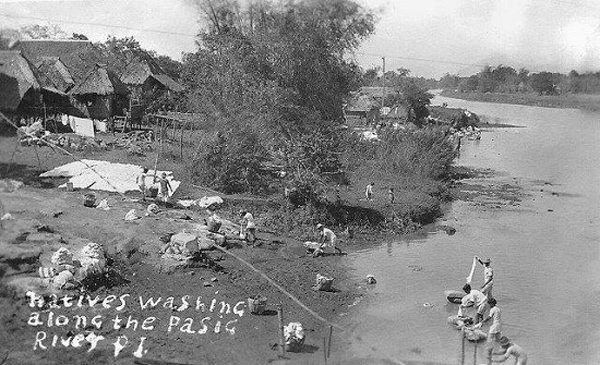 Pasig River not only provided people with a means to bathe but also a place where they could wash their clothes.

As a result, signs of pollution had been evident in Pasig River as early as the 19th Century. In 1850, for example, a Spaniard noticed that the river was slowly losing its pristine quality, partly because of rampant laundry washing by the natives. So that the water wouldn’t lose its potability, it was suggested to use sand and charcoal as a filtering method.

A hundred years later, the Pasig River could no longer keep up with the drastic changes taking place in Manila. By 1960, people stopped washing their clothes, which was soon followed by the decline of ferry services. 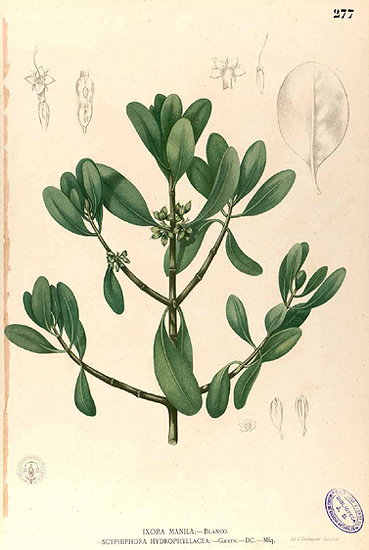 You’re looking at a picture of the plant from which Manila is said to have derived its name. Nila is actually the Sanskrit word for indigo. Eventually, nila became the name of the flowering mangrove that used to grow abundantly along the shores of Manila Bay and the banks of Pasig River.

There was plenty of in the area that our ancestors reportedly named the city Manila, from the compound word “” meaning “there is .”

The shrub (Scyphiphora ), which can grow up to four meters high, eventually died off as the toxic wastes slowly killed Pasig River.

Today, you can still see the almost-mythical plant in provincial areas, including Iwahig in Puerto Princesa, Palawan. 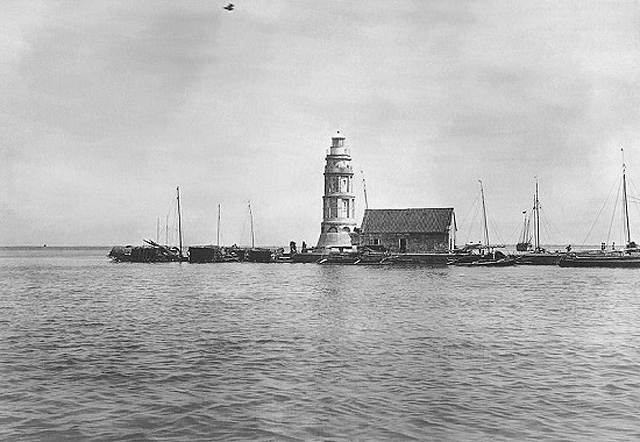 Pasig River Light, the first lighthouse in the Philippines, 1902

Built in 1846, the Pasig River Light was an important and iconic landmark for almost 150 years. Measuring 49 feet tall, the original featured both the Renaissance revival and Victorian architectural styles.

The five-storey brick structure used to house a harpist, as revealed in the coffee table book Pasig: River of Life: “In the days of silent sail-powered ships, the arrival of a schooner or any important vessel was greeted with celestial classics. It was heavenly sound that permeated even the thick walls of the bastion of Santiago, the fort that guarded the river’s mouth as the main garrison of Manila.”

In 1992, it was replaced with an architecturally simpler lighthouse. 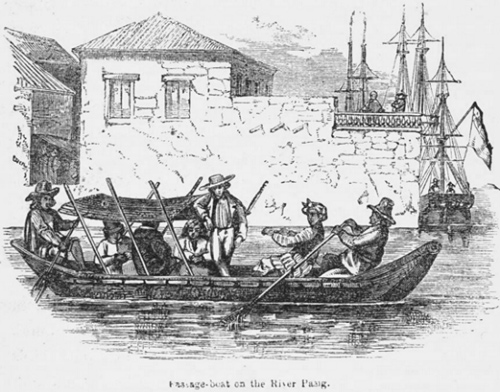 Manila’s canals and used to be brimming with life. An endless line of cascos carrying freight and passengers populated the busy Pasig River, then considered the lifeline of the city.

The city’s elites also preferred to build their luxurious summer homes and gardens along the river. No less than the presidential palace, Malacañan, was born on the banks of the river. 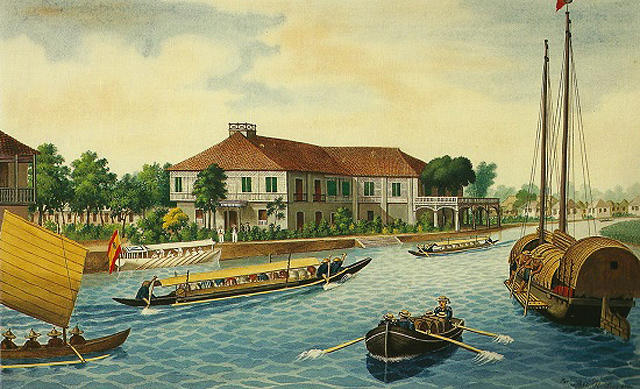 Paul de la Gironiere, a French doctor who spent many years in the Philippines, chronicled in his best-selling 19th-Century travelogue some of the interesting observations he had of the fabled river: “The newest and most elegant houses are built upon the banks of the river Pasig. Simple in exterior, they contain the most costly inventions of English and Indian luxury...Each house has a landing-place from the river, and little bamboo palaces, serving as bathing-houses, to which the residents resort several times daily, to relieve the fatigue caused by the intense heat of the climate.”

The elegant houses are no longer there, as the rich were replaced by the urban poor.

There are a lot of theories and myths that have attempted to explain how Pasig got its name. Among all these explanations, the one offered by anthropologist Dr. E. Arsenio Manuel probably is the most interesting.

Based on his analysis, the word Pasig was the combination of two monosyllabic root bases: the pas, which means “fast flow of water” (as in “pas-pas”); and , which is the Maguindanaon word for water. The latter is also part of some common Filipino words that are related to water, like tub- and -ib.

Therefore, it can be said that Pasig might have been used by our ancestors to refer to the fast flow of water and, eventually, the fast-flowing river itself.

Old Photos Pasig River Pasig Syndication Filipiknow History
Your Guide to Thriving in This Strange New World
Staying
In? What to watch, what to eat, and where to shop from home
OR
Heading
Out? What you need to know to stay safe when heading out