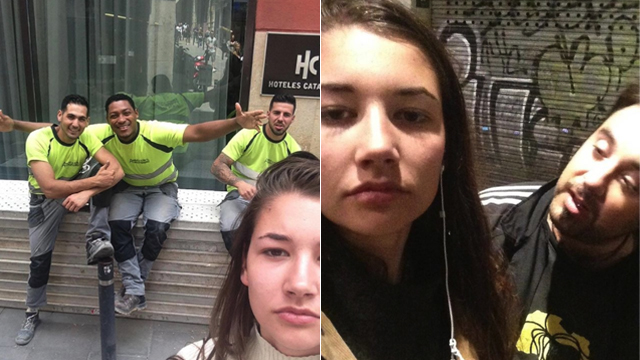 This Social Experiment Exposes Catcallers on the Streets Through Instagram

We should do the same.

(SPOT.ph) Most women in the Philippines—in one way or another—have experienced catcalling. You wait for a cab or a jeepney on the street, then a truck driver starts honking at you. You pass by a group of men, then they start yelling, "Miss! Miss!" There was even a time when President Rodrigo Duterte whistled at a female journalist during a press conference. This is catcalling and, contrary to what disrespectful men think, it is not a compliment. This type of sexual harassment is what a social experiment by Noa Jansma, a 20-year-old from Amsterdam, wished to expose.

Through an Instagram account she created called @dearcatcallers, she took selfies with her own catcallers and posted them on social media with the hashtag #DearCatCallers. "Since many people still don't know how often and in whatever context 'catcalling' happens, I'll be showing my catcallers within the period of one month," she said on her first post. It ran for a period of one month, from August 29 to September 28 and earned more than 130,000 followers as of writing.

"By making the selfie, both the objectifier and the object are assembled in one composition. Myself, as the object, standing in front of the catcallers represents the reversed power ratio which is caused by this project," she explained. Each post contains a selfie in her most uncomfortable reaction, the catcaller's smiling face—which shows just how appropriate they believe their behavior and the inappropriate things these guys said to her at that moment.

Sadly, even the comments section of these Instagram posts reflect the chauvinism that's rampant in our society. Frederick Piña (@freddiefred), a Dominican-born filmmaker, said in a reply: "Young men were like this 100 years ago, and still be [sic] like this, 100 years from today. I know [from] the female perspective that's probably depressing, but it's reality."

Other replies are more apologetic: "I would just like to apologize on behalf of my gender," commented one @meambatzarro. Some expressed their support: "This is such an important and ingenious project! So much respect for the idea and courage to face these men in those situations," replied one @jplesniar. "Her not-smile is the most powerful thing here," Darya Teesewell (@daryadiva) observed.

At the end of the series, Jansma called on people to send in their own #DearCatCallers post to remind others that "catcalling is still a common occurrence that many of us are dealing with."