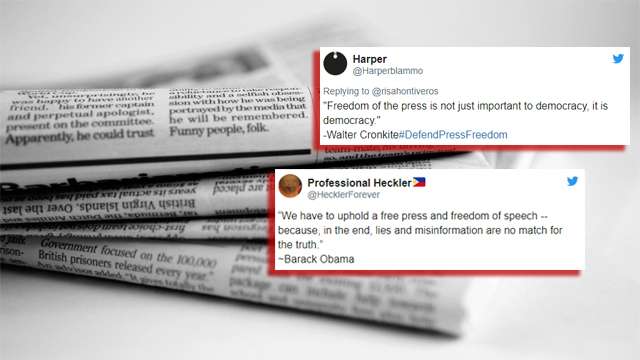 10 Thoughts on Press Freedom That Are Actually Just About Freedom

(SPOT.ph) The Securities and Exchange Commission, on January 15, announced the revocation of Rappler's certificate of incorporation. It's been alleged that the online media outlet has violated the Constitutional provision on foreign ownership of mass media. Rappler denied the agency's claim, stating that "Philippine Depositary Receipts (PDRs) do not indicate ownership. This means our foreign investors, Omidyar Network and North Base Media, do not own Rappler."

It didn't take long for folks online to criticize the move, showing support for the news site with hashtags and quotes about press freedom:

“We have to uphold a free press and freedom of speech -- because, in the end, lies and misinformation are no match for the truth.”
~Barack Obama

The Philippines is basically effectively under Martial Law, with politicians seeking nothing but to keep themselves in power, and we still have many people cheering for the ongoing oppression as if it's not going to come for them at some point.

*Kudos to the person who made this Prezi in 2013. #StandWithRappler pic.twitter.com/qOPlgCNgRa

Welcome to the Philippines under it's new form of martial law. A critical lawmaker jailed for trumped up charges; A judiciary who's no longer independent; Media harassed or shut down for exposing Duterte's crimes. @nytimesworld @washingtonpost @NBCNews @BBCNews

Why can't people see that we are in a low-key martial law?

Our rights and freedom are taken by us day by day by state-sanctioned acts of stupidity and modern-age fascism sponsored by an ignorant populace. It’s time to take that back. #StandWithRappler

"Freedom of the press is not just important to democracy, it is democracy."
-Walter Cronkite#DefendPressFreedom

CEO and Editor-in-Chief Maria Ressa stresses that the revocation doesn't mean Rappler is shutting down, saying, "What we will do is to prepare a fight. Our lawyers are preparing our next step. But it’s business as usual."