Digging Into the Many Layers of the Halo-Halo

There's more to this Pinoy dessert favorite than meets the eye.

(SPOT.ph) Although it seems improbable to us, what exactly one is to do when presented with a tall glass of halo-halo is not immediately evident. The ball of ice cream hovers tantalizingly over the rim, so it makes sense to eat that first. Many foreigners have admitted to me that on their first encounter with halo-halo, they simply ate it layer by layer, until they got to the sordidly sweet syrup pool at the bottom and realized that they must have done something terribly wrong. 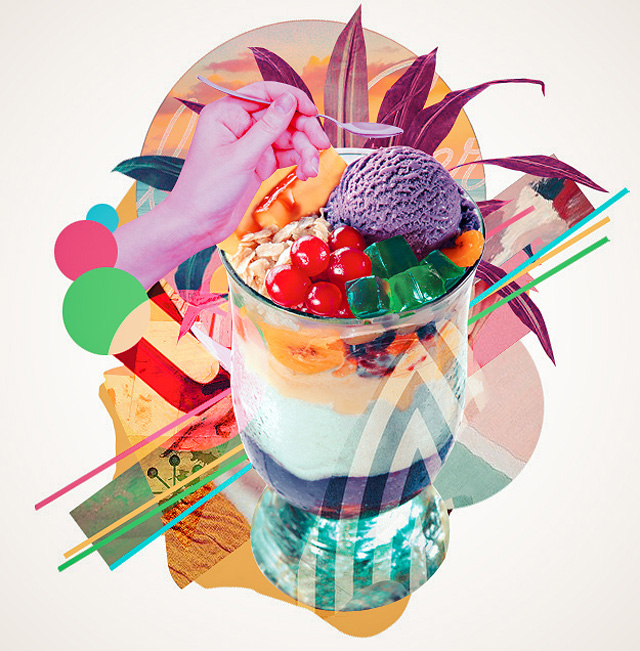 The term itself, halo-halo, is awkwardly translated as “mix-mix”, which sounds like a doting aunt talking to a toddler. An argument can be made for it being a description of the food as something mixed, the way that a “melange” of spices is by virtue it having been “melangé”, or mixed up. However, because it appears before the diner in an unmixed state, an alternative theory is that it is “halu-halo”, referring to the wide variety of ingredients that go into it.

And indeed, it’s quite a diverse range. Ambeth Ocampo has written a short but encompassing article in which he asserts that the Philippine halo-halo comes directly from the Japanese kakigori, which has existed for at least a millennium—it appears in the 10th century Japanese text Makura no Soshi, translated as The Pillow Book of Sei Shonagon. The Japanese influence in the Philippines came before the actual occupation by armed forces during the Second World War: during the 1920s and 1930s, Japanese were already living and working in the Philippines—thus the famous stories of innocuous-seeming Japanese gardeners who turned out to be ranking members of the Imperial Army. The Japanese were also very much present in industry and retail trade as well. Manuel L. Quezon spoke of the “thousands of Japanese subjects” residing in the archipelago, “second only to the Chinese.”

The red bean content of halo-halo seems to stem from this era—we have very few desserts that use this as a flavoring, but it’s a cornerstone of Japanese confectionery. But we have several desserts that do not involving mixing a number of diverse flavors together, but use ice: mais con hielo, saba con hielo, and so on. For these desserts, it’s not essential that that the ice be shaved, as with halo-halo; they can use crushed ice. But first, there had to be ice. The Spanish were enjoying iced desserts, at least among the nobility, since the 17th century. But the problem, then as now, was transportation. Unlike colder countries, where you could build an insulated ice-house in the winter and then pack it with snow or ice, the ice in Spain was likely cut from the mountains and transported to the lowlands packed in straw. 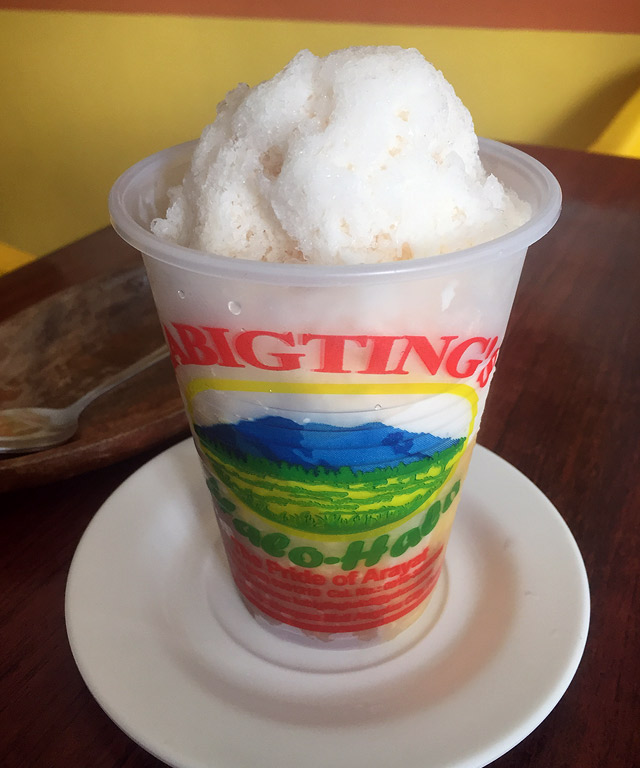 It is unlikely that we had any knowledge of ice until the Americans. The galleon ships, which stopped over at Acapulco, were too slow to carry ice, no matter how well insulated. It was the invention of the fast clipper ships from America that first brought ice to our islands. Ocampo writes that the ships carrying ice from Wenham Lake arrived in the Philippines as early as the mid-nineteenth century, but the first ice plant was not until the turn of the century. In the early days, crushed ice was, simply, crushed: placed between two pieces of cloth and smashed with a mallet or a pestle. The fine, snow-like consistency of shaved ice, which lasts only minutes before it re-freezes into a hard ball, needed the rotating kakigori-ki which has remain unchanged in both shape and principle from the pre-war days.

Our neighboring countries all have variations of halo-halo: ais kacang, campur, cendol (which refers to the oddly-textured jelly-like worms made from glutinous rice flour). Malaysia, Singapore, Thailand, Vietnam, and even Hong Kong were captured and occupied by Japanese forces during the Second World War, so the origins, and the similarity, to halo-halo are not surprising. What is interesting though is that most other Southeast Asian countries put the sweet topping on the ice rather the underneath the ice, as we do with halo-halo—although some modern versions are so rococo with the garnishes above the ice that the layer of shaved ice is sandwiched between the sweetmeats. We are also notably one of the countries who use cow’s milk, as the Japanese do, rather than coconut milk. It’s entirely subjective which country has the best version, of course, but I’m convinced that ours is the most complicated.

The perfect halo-halo, as far as I’m concerned, should not have too much in the way of kidney beans or chickpeas; it is a dessert or snack after all, not a burrito. The red adzuki beans are essential, as it is what links the halo-halo to Japan. The rest of the ingredients can be varied to taste: I like a bit of macapuno and nata de coco, but really I don’t want to eat too much stuff, but to cool down. What people often don’t understand is the connection between halo-halo and other iced desserts such as sherbet (from the Arabic and eventually the Persian‎ “sharbat”, to drink) which is based on syrup poured over ice: the solid ingredients don’t amalgamate, but whatever ingredients you put into halo-halo must include the syrup, as these are what flavor the ice. 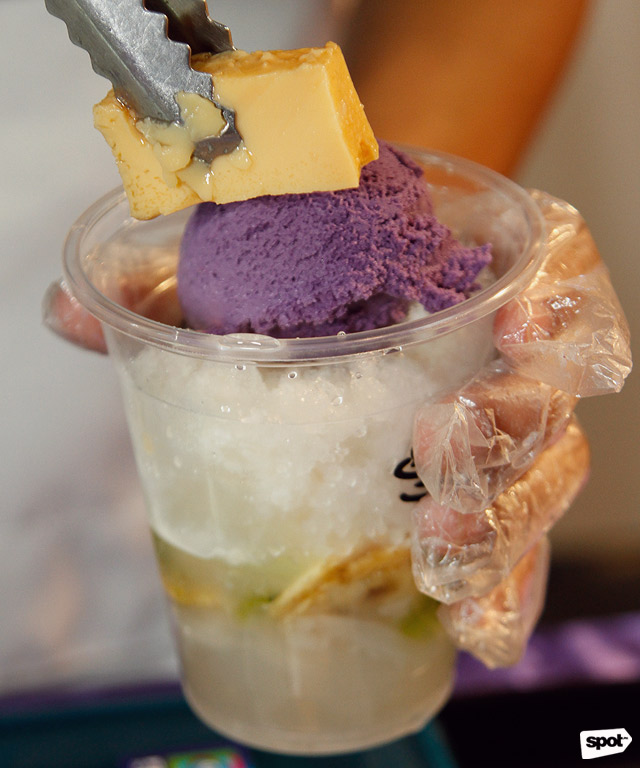 The scoop of ube ice cream on top of the shaved ice is supposed to be optional but has become almost ubiquitous; you have to decide early on whether you want your halo-halo to be purple. Although the purple in ube halaya or in ube ice cream is almost certainly artificial in part, the color, though not the flavor, tends to be overpowering. Some people even put both ube ice cream and the cooked paste into the glass, which is a lot of purple yam. Traditionally, evaporated milk is used, but since the ice cream is destined to melt, a dollop of cow’s milk, or, preferably, carabao’s milk can be used instead. Finally, there is some debate as to whether the slice of leche flan, delicately balanced atop this already towering confection, is gilding the lily—and whether it should be eaten separately, or mixed into the amalgamation. Pinipig can also be added—those who substitute cornflakes should be shot for treason.

The best halo-halo can be mixed with a vertical piston-like motion, pushing the ice and ice cream down into the glass while pulling up the beans and other sweets at the bottom. Mix-mix—but not too much; you should still be able to have the delicate flakes of shaved ice melt on your tongue. There it is: the taste of summer.