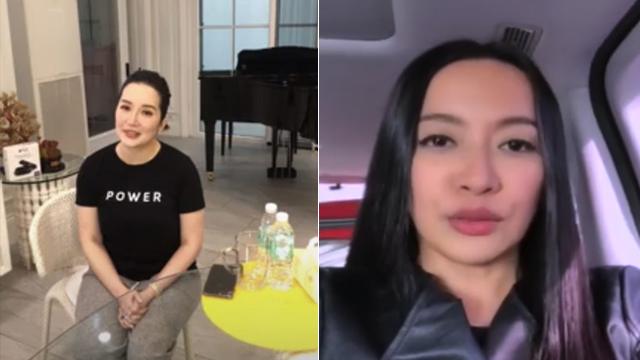 (SPOT.ph) After less than a day of waiting for Mocha Uson's response to Kris Aquino's Facebook post, the communications assistant secretary finally released a video on June 6, 4:30 p.m. Unfortunately, we won't be seeing an intellectual debate or a showdown anytime soon.

"Ito po ang aking response sa live video ni Ms. Kris Aquino," the 23-second video clip started. Uson further clarified that "this is not about Kris Aquino," and instead pointed out that it's about comparing Duterte's controversial act to an incident that involved Aquino's father, 35 years ago. "Ms. Aquino, this is not about you," she reiterated.

Many were disappointed after hopes for a reenactment of that infamous-hair-pulling anytime soon were ruined.

.@krisaquino214: This is not about me. This is about Ninoy.@MochaUson: *claps back* THIS IS NOT ABOUT YOU MISS KRIS AQUINO.

While others approve of Uson’s decision to ignore the challenge. In a follow-up post, the public official said: “With all due respect to everyone involved, I decline to apologize for the truth.”

Earlier at 2 p.m., Malacañang—through Special Assistant to the President Bong Go—"conveyed [their] apologies for the incident."

Kris went live on Facebook and Instagram at 5:59 p.m. "You have a point, it is not about me. It is about my father." She continued with, "Laman at dugo niya ako, at may karapatan ako para magsalita para sa kanya," the former presidential daughter started.

She expressed her disappointment with Mocha's refusal to apologize, even referencing Special Assistant Bong Go's apology to her in a press conference on President Duterte's behalf. "Pero walang ka-sorry-sorry."

"You know bakit ako nasaktan? The choice of video. You chose the video taken how many minutes before he was killed."

"Mocha, you win. You win because you hurt me, and I think that's what you wanted to do... This is for my mom who told me, 'Be the better person.' I think I’ve done my share, I tried to reach out, I humbled myself. Isa lang naman ang gusto nating lahat, na mapabuti natin ang Pilipinas."