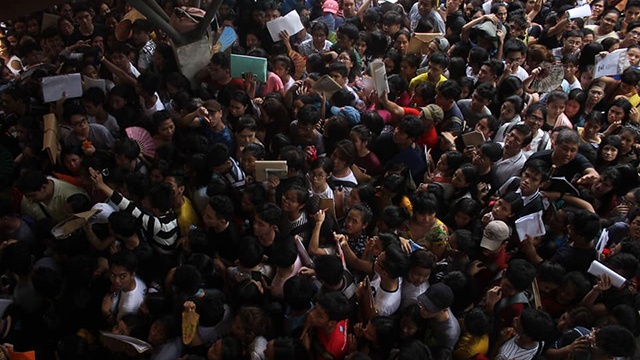 The deadline was extended from the original date, July 27.

(SPOT.ph) To say that the lines were long at the University of the Philippines - Diliman campus today is a huge understatement. Despite an extension of its original deadline date of July 27, over 10,000 high school students and their parents were estimated to have gone to the state university's campus today, July 30, to submit their applications to take the University of the Philippines College Admission Test or UPCAT. Things got a bit chaotic: lines became disorganized, students passed out, the size of the crowd started to rival that of a tightly packed MRT train car during rush hour.

It's not the first time a large number of students has applied to study at UP. In 2017, the university received over 103,000 applications. Not everyone who applies to take the exam actually end up taking it, but here are 10 posts that capture just how real the struggle for a good education got today.

On the last day of filing UPCAT applications for Metro Manila private schools, thousands of students and parents crowd in front of the UPD Office of Admissions. pic.twitter.com/i3lRLzSIak

The crowds were intense, to say the least.

UPCAT Applicants are already lining up at UP Diliman OUR. Currently pinapaalis ng guard (photo not mine)

Huhu laban mga bata ????@upsystem please do something about this huhu pic.twitter.com/Xd9SgAYPxa

Applicants were lining up as early as the night of Sunday, July 29.

Well, we see the similarities.

LOOK: Senior high school students flock the UP Office of Admissions on the last day of the submission of application requirements for UPCAT 2019 (for Metro Manila private schools). @gmanews pic.twitter.com/FL4Pg6ZvqL

There's never an excuse for littering!

Went to get my TOR and only then realized why it was such a bad idea. Stampede ng UPCAT 2019 application. ???? pic.twitter.com/KummmxRRgk

Another stampede to rival the great Zark's stampede of 2017.

LOOK: UPCAT applicants still hoping to get inside UP Office of Admissions and submit their applications. Meanwhile, the line inside is still long. pic.twitter.com/lUmvGBjYgc

Apparently, it’s the last day to submit requirements for UPCAT. witnessed chaos and people literally losing their consciousness. The gates are almost broken. Parang magkaka stampede na ???? This video doesn’t even give justice to what is happening in UPD today #UPCAT2019 pic.twitter.com/DzcJMzLq0b

Applicants in line for UPCAT Application in UP Diliman now chants “Extension” pic.twitter.com/3g2WsuW7tE

Stampede Online Reactions Upcat Tweets Up Diliman
Your Guide to Thriving in This Strange New World
Staying
In? What to watch, what to eat, and where to shop from home
OR
Heading
Out? What you need to know to stay safe when heading out