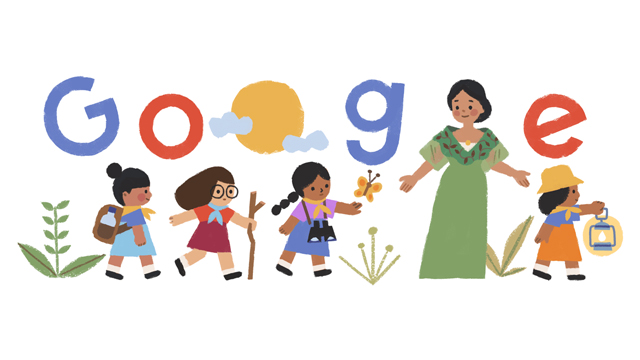 (SPOT.ph) Since it started in 1998, the Google Doodle has been a fun way to learn more about milestone events, trailblazers, and even significant moments in pop culture. It's also been known to feature notable Filipinos like musician Levi Celerio or poet Francisco Balagtas. This time around, it pays tribute to a notable Filipina: Josefa Llanes Escoda, the founder of the Girl Scouts of the Philippines and advocate for women's rights and suffrage, in commemoration of her 120th birth anniversary. In today's Google Doodle, Escoda can be seen wearing a moss-green shawl with a leaf motif reminiscent of the Girl Scouts uniform, as she leads a group of young scouts on a nature trek.

Born this day on 1898, Escoda was a philanthropist who first joined the Philippine chapter of the American Red Cross. After graduating with a master's degree in Sociology from Columbia University in 1925, she went on to found and open Boy's Town in Manila in 1937, a home for underprivileged youth. In 1940, she founded the Girl Scouts of the Philippines, and served as its first National Executive.

During World War II, Escoda and her husband Antonio Escoda worked tirelessly with the National Federation of Women's Clubs to reconnect Filipino prisoners-of-war with their families, aside from supplying them with food, clothing, and money. In June 1944, when the Japanese forces got wind of their "smuggling" activities, Escoda and her husband were arrested. She is said to have been executed in February 1945.

As a tribute to her life's work, she is depicted on the current P1,000 bill along with Vicente Lim and Jose Abad Santos, two other Filipinos who were martyred by the Japanese armed forces during the war.

Josefa Llanes Escoda Google Doodle Google
Your Guide to Thriving in This Strange New World
Staying
In? What to watch, what to eat, and where to shop from home
OR
Heading
Out? What you need to know to stay safe when heading out