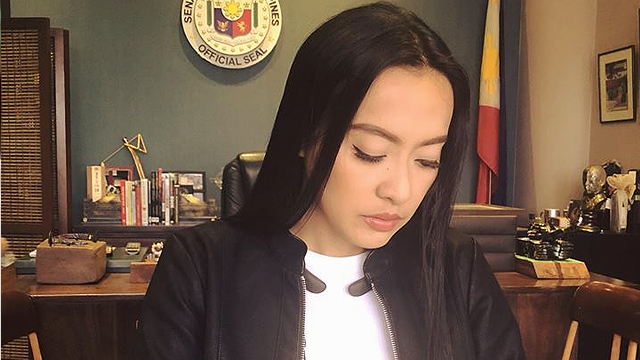 This Is Not a Drill: Mocha Uson Resigns

"Is this real life? Is this just fantasy?"

(SPOT.ph) News broke on Wednesday morning, October 3, that Assistant Communications Secretary Mocha Uson has resigned from her post. The performer-turned-public official announced this during the third regular session of the 17th Congress, which was holding a hearing on the proposed 2019 budget of the Presidential Communications Operations Office at the Senate Building in Pasay City.

Uson argues, according to a report by Paolo S. Romero of The Philippine Star, that some congressmen have been holding the Presidential Communications Operations Office (PCOO) budget hostage. She also announced that she is "open to" running for the Senate or the House of Representatives.

The former assistant secretary has often been hounded by controversy, especially for the (mis)information she habitually posted on her social media account Mocha Uson Blog—the latest being a questionable video on federalism. So it doesn't come as a surprise that people are already celebrating this bittersweet news.

Bad News: She’s looking at the opportunity to run for Senator or Congresswoman. ????????

And why so timely and dramatic? Obviously because the deadline for filing as a candidate is on October 11. Watch out for Senator or Congressman Mocha Uson .... stand aside mme kabuki ???? pic.twitter.com/HLw41ZwbO7

When Mocha Uson resigns yet you know she's gonna run for some government post. pic.twitter.com/DcrnDSIThh

Others, however, are looking forward to seeing her in the Senate.

@RRD_Davao MGA INNGIT NA DILAWAN. MOCHA USON OUR NEXT SENATOR IS DOING HER JOB BETTER THAN YOU ALL CORRUPT LP'S AND ASSOCIATES COMBINED!!! pic.twitter.com/wr2Lk8NQZj

Thank you for serving the Filipino people @MochaUson . Thank you for resigning. Now, to your next adventure as SENATOR MOCHA USON. ilampaso mo sila sa 2019 https://t.co/Ea0dne0eiK

Uson has yet to make a statement, which she'll probably do ASAP on Facebook.

Duterte Senate Mocha Uson
Your Guide to Thriving in This Strange New World
Staying
In? What to watch, what to eat, and where to shop from home
OR
Heading
Out? What you need to know to stay safe when heading out