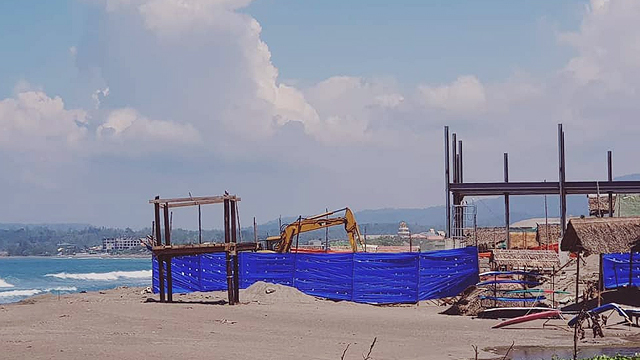 Are we really doing this again?

(SPOT.ph) Tourism in beach destinations is often tricky. On one hand, you want to draw in tourists to experience the best sights in the country; but, sometimes, you just want to keep it to yourself to avoid abuse of the environment. Just look at how white-sand beach paradise Boracay eventually turned into a "cesspool," as President Rodrigo Duterte called the island in February 2018, after the resorts dumped most of their waste into the waters and built their infrastructure too close to the sea.

It seems that history is repeating itself—no matter how clichéd that may sound—in another beach and surf hotspot in the Philippines: San Juan, La Union. A photo of a questionable construction site spread on the Internet on October 2, and through the efforts of the local community, the construction work was temporarily stopped on October 3.

The Project That Started It All

Locals already expressed concern over the construction of a four-star resort in Barangay Panicsican in December 2016. This, according to environmental group Coastal Underwater Resource Management Actions, would gravely affect the local sea turtles (or pawikan) since a huge part of the development is their nesting ground. Sixty percent of turtle nests were found by the organization near the opening of Panicsican Creek in the last eight nesting seasons.

When giving birth, huge sea turtles crawl out of the ocean and into large sand-dune formations in San Juan to lay their eggs in freshly dug holes. After a few weeks, turtle hatchlings dig their way through sand and make their way into the sea—which looks cute, by the way, when you see it. These little creatures have yet to learn geography so they rely on visual cues, such as the reflection of natural light on water at night, and the ocean’s movement, particularly how the waves move into and away from the shore. You can just imagine how confusing lights coming from resorts and hotels can be for them, aside from the fact that excavation can mess up the sea's wave energy.

San Juan Vice Mayor Miko Magsaysay argued in a previous post by SPOT.ph that construction is far from these sea animals. A beach club and residential resort complex is also expected to open here in the last quarter of the year.

More construction was captured on camera (and social media) by local café El Union on October 2. "The #LaboraficationofLaUnion. Heavy construction excavator on #pawikanbeach today north of Flots, in the middle of #seaturtle nesting season, building what looks like a permanent structure on the sacred sand," the post said.

Considering that it’s outside the ongoing construction site of RCL Realty & Consulting Services (which is building the beach club) and is operated by a different company, Green Portos Development Corporation, business owners in the area speculate that it’s yet another infrastructure project. “This is how to ruin a beach, and eventually a surfable wave. But more importantly it is how to ruin a natural wildlife habitat for ancient sea creatures who help keep the ecosystem in balance,” the post continued.

Coastal Underwater Resource Management Actions (CURMA), in an effort to spread awareness on how this can critically endanger marine life in the area, released an informative video on how the ongoing construction can gravely affect the La Union coastline. The pawikan, now classified as an endangered species, is responsible for controlling jellyfish population in the ocean, which is why surfers and beach-lovers can enjoy the waters without the fear of getting stung. "If man alters the coastal landscape with no consideration for the impact on Nature, this will contribute to destruction. Marine life such as coastal plants, trees, and animals that have kept and maintained the balance of these areas will be destroyed," the post explained.

Based on the building permit, the project was given a Certificate of Non-Coverage by the Environmental Management Bureau of the Department of the Environment and Natural Resources on June 19. This certificate is given to projects that supposedly do not need approval by the Environmental Impact Assessment System. It was also approved by the Municipality of San Juan, La Union on June 29.

In a letter sent to San Juan Mayor Arturo P. Valdriz on September 20, the Provincial Environment and Natural Resources Officer of La Union is reiterating that the subject lot in question is "already abutting the waters, hence, maybe considered a foreshore land." The same request to "halt any ongoing improvements / construction" was sent on October 2.

By the afternoon of October 3, a temporary halt order was served by the Office of the Municipal Engineer.

Sea Turtles Waves Beach Club And Residences Miss World Philippines 2018 Travel La Union San Juan Pawikan
Your Guide to Thriving in This Strange New World
Staying
In? What to watch, what to eat, and where to shop from home
OR
Heading
Out? What you need to know to stay safe when heading out