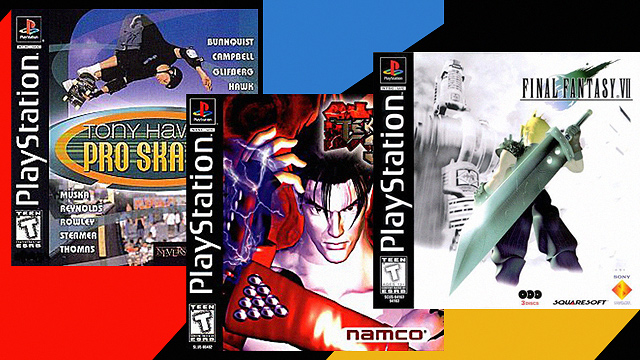 10 PlayStation Games That Will Make Any '90s Gamer Nostalgic

Reminisce just in time for the release of the PlayStation Classic!

(SPOT.ph) With the release of the PlayStation Classic on December 3, a lot of eyes got a bit teary-eyed from reminiscing their time with Sony’s first game console, which served as the inspiration behind the mini console. If you weren’t watching The Rugrats, Teenage Mutant Ninja Turtles, Are You Afraid of the Dark or Saved by the Bell, you were probably arguing with your sibling on whose turn it was on the PlayStation.

As the waves of nostalgia hits the shores of the '90s, all the artifacts from that era are slowly starting to acquire retro status. Ask any '90s kid and they’ll tell you that some of the best things from that time period deserve to be labeled as timeless classics.

Crash Bandicoot was the PlayStation’s answer to the megahit platformers of the 2D era such as Super Mario and Sonic. Taking its cues from games such as Donkey Kong Country, the game’s main character is Crash, an hyper-evolved bandicoot who traverses various island levels. For those who grew up on early Cartoon Network and Nickelodeon shows, the graphics and character designs looks all too familiar. Crash dispatches his enemies with moves such as jump and a spin attack. Unusual for platformers of the time, the player sees all the action from behind the character. Before trying to defeat the game’s main villain Doctor Neo Cortex, Crash must rescue his friend and defeat a few of Cortex’s failed creature experiments.

The game that pioneered the stealth-action genre, Metal Gear Solid promised gamers "tactical espionage action" which the game delivered in spades. As the character Solid Snake, players are tasked with infiltrating various military installations that’s crawling with enemy forces. Instead of engaging them directly, the best course in the game is to evade the enemy using various moves such as hiding/peeking around corners or under objects. A tactical map informs the player of the alert level of the enemies. Memorable characters and various plot twists add to the sneaking action, which you can relive once more on the mini console.

Castlevania: Symphony of the Night (1997)

Instead of a member of the Belmont clan as a lead, Castlevania: Symphony of the Night tells the story of Alucard who is the half-vampire son of Dracula. The game takes amore RPG approach with Alucard slowly having various abilities including shapeshifting into a wolf or a bat. There are vast areas to explore with non-linear level design and more than hundred enemy types to defeat. Although the dated 2D graphics may put off some players, the game’s deep character customization and multiple endings will keep anyone hooked for hours.

In the year 2052, hovercraft racing is a big thing. Wipeout is a futuristic combat racer where players control high-speed ships on twisting neon-lit tracks that snake through sci-fi cityscapes.

While the ships themselves have different characteristics such as top speed and acceleration, it’s the power pick-ups such as shields, boosts, mines, and missiles that make the game interesting. Making the game more memorable is the game’s '90s electronica soundtrack from artists such as Orbital, Daft Punk, The Prodigy, and Chemical Brothers.

The game that started the video game skateboarding franchise, Tony Hawk’s Pro Skater is one of the most exciting and playable sports games in the PlayStation library. During the '90s, street skateboarding took off and skateboarders got proper cred. Of course not anyone could just pick up a board and those who wanted to have a taste only needed a PlayStation and Tony Hawk’s Pro Skater. Extremely addictive and infinitely replayable, players try to execute various skateboarding moves and tricks using various controller combos. The challenges slowly ramp up as players get more confident with their newly-learned tricks. A split-screen multiplayer mode lets gamers challenge other

Blending environmental puzzle solving, sci-fi, action, and horrifying monsters, Resident Evil kicked off the survival horror genre when it launched on the PlayStation in 1996. Using pre-rendered backgrounds and real-time 3D graphics for the characters, the game’s unique blend of various elements from other genres created a lasting impact on gamers as they roamed a mysterious mansion and slowly uncovered its horrifying secrets. Resident Evil’s winning gameplay formula kicked off a ton of sequels that continue to be released for the current generation of consoles. The PlayStation Classic will carry the Director's Cut version of the game.

At the time when most hardcore racing sims were PC-based, Gran Turismo set the bar high for console-based racing sims. With over 140 vehicles and 11 racetracks, the game offered various racing and driving challenges to the avid video game racer. For car nuts, iconic cars from the ‘90s were well represented such as the 1995 Toyota Supra, 1991 Nissan R32 Skyline GT-R, 1993 Honda Civic VTi, and 1996 Mitsubishi Lancer Evolution IV GSR. As the game progresses, players unlock different cars as well as earn credits for upgrading vehicles. At the time, Gran Turismo was one of the most graphically impressive games on the PlayStation.

Also part of the PlayStation Classic game lineup is Tekken 3, Namco’s hit arcade fighting game. Full rendered in 3D, Tekken 3 features refined gameplay that emphasizes more realistic moves, quick recovery, and evasive counter moves. Additional moves such as improved juggling, escapes from tackles and stuns as well as new combo throws add to the excitement. With a roster of nearly two dozen characters and 15 stages, the game is considered to be one of the best fighting games of all time. Included in the game is a side-scrolling beat-em-up mode.

While the jump to 3D made even non-fans notice, it’s the trademark gameplay and story that cemented Final Fantasy VII (FF7) as one of the greatest Japanese RPGs of all time. FF7 introduces the story of Cloud Strife and his party as they try to thwart the world-ending plans of the Shinra Corporation. The game is even made more remarkable by introducing one of the most recognizable villains in FF canon, namely Sephiroth. Featuring a large 3D overworld to explore, FF7 is also best remembered for its use of full-motion video. Now you can get to exploring again as it's also available on the PlayStation Classic.

Although now overshadowed by other games such as the Dance Dance Revolution or Guitar Hero series, PaRappa the Rapper pioneered the rhythm-game genre. The '90s was the golden age of rap and hip-hop with artists like Ice Cube, Snoop Dogg, Jay-Z, and Beastie Boys ruling the charts. The influence of rap music spilled over to video games such as PaRappa.

With game graphics that resemble a kid’s cartoon show, the game’s main protagonist is a PaRappa, a dog who gets involved in several silly shenanigans including training under master rappers. The main challenge in the game is performing various onscreen key presses flashed in-sync with the game’s loopy rap lyrics.