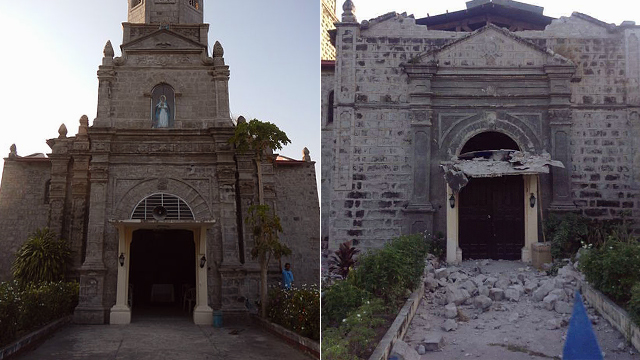 PHOTOS: A Look at Heritage Churches in Quake-Hit Pampanga

Here's what happened to some of the heritage churches in the province.

(SPOT.ph) Had the magnitude 6.1 earthquake that hit Luzon on April 22 come just a day sooner, its effects might have been far more tragic for the residents of Pampanga. It was after all, the day when people celebrated Easter Sunday. The earthquake, which was followed by several others hitting different regions of the Philippines, came as a shock to everyone, particularly for those living in the province, where 16 casualties were recorded.

Being one of the first provinces of Spain in the Philippines, Pampanga is home to many old churches, relics that have withstood even the worst of the Pinatubo explosion in 1991. But the recent earthquake has inflicted damage on many of the province’s heritage churches, prompting the Archdiocese of San Fernando to temporarily shut down 24 of them until proper inspection and repairs are made.

Serving as historical landmarks, old churches are guideposts in understanding the rich history of the Filipino people, and how we struggled, strived, and rose amidst years and years of colonial rule.

Here’s a look at some of the notable heritage churches that suffered damage when the magnitude 6.1 earthquake hit Pampanga:

The collapse of the four-story supermarket in Porac is perhaps the most devastating incident caused by the earthquake. According to the Philippine Institute of Volcanology and Seismology, the softer soil in Porac (and other areas where lahar was deposited during the Pinatubo eruption) is the reason why the temblor seemed more powerful in the town. Aside from the supermarket, the earthquake also caused the collapse of the Santa Catalina de Alejandria, a Baroque-style church with an octagonal bell tower—much of which has been reduced to rubble.

For Kapampangans living in (or near) Angeles City, Fridays are for shopping at the tiangge that sets up around the Apung Mamacalulu Shrine—a habit born from years of attending the Friday mass at the old church. It houses the lying statue of Jesus, fondly called “Apu” (a term used by the Kapampangan to refer to someone elderly). The sanctuary table of Apung Mamacalulu Shrine sustained damage from fallen debris.

Housing a first-class ex carne (“from the flesh”) relic of Santa Rita de Cascia, the Sta. Rita Church has attracted countless pilgrims over the years. Although the town is geographically close to Porac, the damage it sustained from the earthquake was not as massive as in other Porac churches. Cracked stone walls and fallen debris at the bell tower were discovered after inspections were made around and inside the church.

Declared an Important Cultural Property by the National Museum of the Philippines, the San Augustine Parish Church in Lubao bore witness to several significant events in history. The church and convent was once occupied by Philippine revolutionaries in 1898; used as a hospital by the American Forces in 1898; and destroyed in 1942 by Japanese bombing during the World War II. Following restoration efforts, the old church remains intact—the earthquake only managed to damage the topmost part of the belfry.

Often referred to as the Sistine Chapel of the Philippines, the St. James the Apostle Parish Church in Betis, Guagua is a Baroque-style church known for the ornate paintings on its ceiling. It was declared a National Cultural Treasure by the National Museum and National Commission for Culture and Arts. Visible cracks on pillars and walls were found after the earthquake. Thankfully, the painted ceiling and dome were unscathed.

Fondly called “Pisambang Maragul” (huge church) by locals, the Holy Rosary Parish proudly stands among one of the most commercialized districts of Angeles City. It’s frequented by many and known to be one of the city’s most familiar landmarks. It had undergone restorations and retrofitting over the years after disasters both manmade and natural, but much of what stands today is “basically of the same structure” as the one erected way back in 1877. Diagonal cracks on the interior walls of the church were found after the earthquake.

Said to be built by the Dolores family in the 1856, the Our Lady of Sorrows Chapel is located within the old Hacienda Dolores, before the estate became a barangay of Porac. Even though it has been well-preserved and maintained over the years, the side entrance of the church sustained significant damage, with parts of the stone wall reduced to debris.

Believed to be the first circular chapel of its kind in the Philippines, the Pio Chapel was erected in 1861 and is recognized as one of the oldest yet best-preserved chapels in the country. Unfortunately, the posts supporting the facade have crumbled due to the earthquake. Debris from other parts of the church were also found scattered around its perimeter.