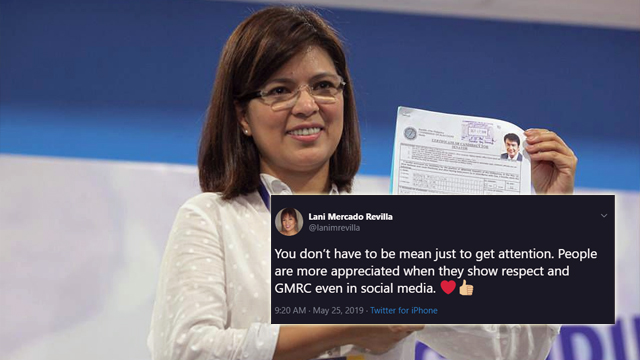 Lani Mercado-Revilla Schools Us About "Good Manners and Right Conduct"

And it did not go well.

(SPOT.ph) If there's anything that social media taught us, it's to think before we click because no one knows who's going to see your posts. For Lani Mercado-Revilla's most recent tweet, more than 1,600 people liked her post while more than 300 people shared what she has to say about "respect and [Good Manners and Right Conduct]." That doesn't mean to say that Twitter users loved it as shown by the backlash in the thread.

"You don’t have to be mean just to get attention. People are more appreciated when they show respect and [Good Manners and Right Conduct] (GMRC) even in social media," Mercado-Revilla posted on May 25, 9:20 a.m. She is the incumbent mayor of Bacoor City; former congresswoman who represented Cavite's second district; and wife of senator-elect Bong Revilla. While the mayor's intention to school us on GMRC is all well and good, her association to Revilla makes things a bit more problematic.

The senator-elect happens to be accused of misusing his Priority Development Assistance Fund, alongside Juan Ponce Enrile and Jinggoy Estrada. The three were indicted in 2014 for plunder. The Ombudsman found probable cause to indict Revilla in relation to funneling pork barrel allocations to Janet Lim-Napoles's bogus non-government organizations in exchange for kickbacks worth P242 million. Charges were formally filed at the Sandiganbayan and he was detained at the Philippine National Police Custodial Center upon his request.

After four years, he was acquitted for the plunder case and allowed to walk free. The Office of the Ombudsman, however, urged the anti-graft court to issue a writ of execution that would compel the senator to pay P124.5 million in civil liability. Revilla denied this and said in May 2019 that "It was a lie. The court did not say I return [the money]." The actor-turned-politician, however, is still facing 16 other counts of graft for the same pork barrel case and had posted bail of P480,000 in December 2018.

Reactions to Mercado-Revilla's tweet ranged from "respectful" reminders to polite requests (and a lot of "please") for her husband to return the aforementioned money. Someone even wished her "God bless." Seems that people learned a lot from her GMRC lesson-for-the-day.

Lani Mercado Twitter Social Media Bong Revilla
Your Guide to Thriving in This Strange New World
Staying
In? What to watch, what to eat, and where to shop from home
OR
Heading
Out? What you need to know to stay safe when heading out