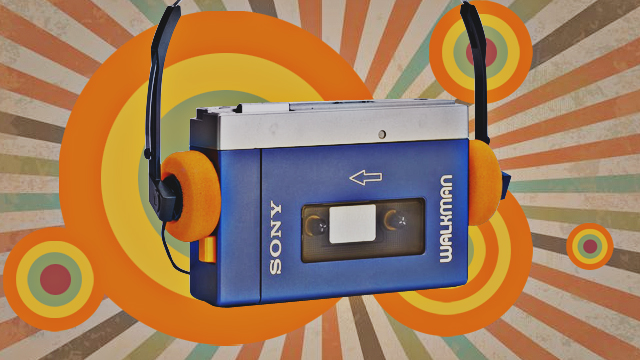 How the Sony Walkman Changed the Way We Listen to Music

Before 1979, people listened to music on the radio, or on vinyl records at home. At the time, compact cassette tapes were also pretty much the standard. Compact cassettes, or simply cassettes, were invented by Dutch company Philips in 1963 with the original purpose of recording audio material, ideal for journalists and secretaries. They sold blank or unrecorded cassettes for the first year, but they realized that there was a huge untapped market for cassettes with prerecorded music.

The Birth of the Audiocassette

In 1964, the mass production of music cassettes started. It would be known as musicassette, M.C., or audiocassette. For the rest of the decade, audiocassettes started disrupting the music industry, becoming a viable alternative to vinyl. But issues with sound quality and performance impeded the cassette's dominance in that decade. It was only during the '70s when cassettes saw a significant improvement in both sound quality and performance when it finally became a popular alternative to vinyl records. On July 1, 1979, 15 years after the audiocassette's invention, people were introduced to the Sony Walkman TPS-L2: a portable cassette player that came with earphones.

The Birth of the Walkman

When Sony co-founder and music lover Masaru Ibuka traveled in the '70s, he would often find himself towing Sony's bulky stereo cassette recorder and player, the TC-D5, just to listen to music. Probably tired of hauling the stereo on his business trips, Ibuka tasked Sony's Executive Deputy President Norio Ohga to scale down the TC-D5's design and design something that only plays music.

The result was a prototype: a high-quality, compact, and portable cassette player.

Masaru took the product and brought it to Sony chairman Akio Morita. "Try this. Don't you think a stereo cassette player that you can listen to while walking around is a good idea?" Ibuka reportedly said. Apparently, Morita decided it was a good idea, because the next thing Ibuka knew, Sony was coming up with names to call the new device.

For the U.S., Sony's new portable cassette player was initially named Sound-About, while for the U.K., they opted for Stowaway. But the plan to have different names to suit different countries didn't last when Sony realized that patents and copyrights for each country for a single product were expensive. They eventually came up with the name Walkman, a play on Sony's earlier cassette recorder, the Pressman (which was typically used by pressmen or journalists to record interviews).

The simplicity of the Walkman's design changed the way people listened to music forever. Although it was not the first product to feature portable audio, it was the first to feature audio privacy by having headphones and no external speakers. People loved it and Ibuka's idea proved to be a gold mine: Sony predicted the Walkman would sell 5,000 a month. It sold 50,000 in two months, and the rest was history.

The Walkman and Cassette Culture

The success of the Walkman not only meant the start of the era of portable music, but also of cassette culture: home recording, tape trading, and creating mixtapes.

Tape trading was a trend in which people mailed recorded music to each other through the postal system. Such cassettes could contain audio of recorded concerts, radio broadcasts, or personal recordings of music.

A mixtape is a cassette with a compilation of music usually recorded from radio broadcasts. A person had to wait to chance upon a particular song he or she liked to play on the radio, and then record it on the cassette. It would usually take days or weeks to complete a single playlist in a mixtape because of the difficulty of compiling songs. Receiving a mixtape as a present or a gift meant a big deal.

An example of a mixtape is Awesome Mix Vol. 1 from Guardians of the Galaxy (2014), a sort of time capsule from the '80s that represents Peter Quill's only remembrance of his life on Earth before he was abducted by aliens and became Star Lord.

The Walkman in Its Final Years

Many of us have not picked up or listened to music on a Walkman for decades, but interestingly, Sony only pulled the plug on the cassette Walkman's production in 2010, according to a report by Inquirer.net.

In the mid-'90s, the cassette was gradually eased out as the dominant format for audio, replaced by the compact disc or CD. Sony came out with the Discman, a CD version of the cassette-based Walkman. In the early 2000s, the CD player was also replaced by the MP3 player, which was even more compact.

Today, Sony has rebranded the Walkman as a line of high-fidelity audio players. As of 2010, the Walkman had sold over 220 million units of portable audio players since its launch. The Walkman remains one of the most beloved icons of pop culture.