QC Gender Fair Ordinance Highlighted After Transgender Woman Barred from Bathroom
Loading
Already a member? Log in
No account yet? Create Account
Spot.ph is your one-stop urban lifestyle guide to the best of Manila. 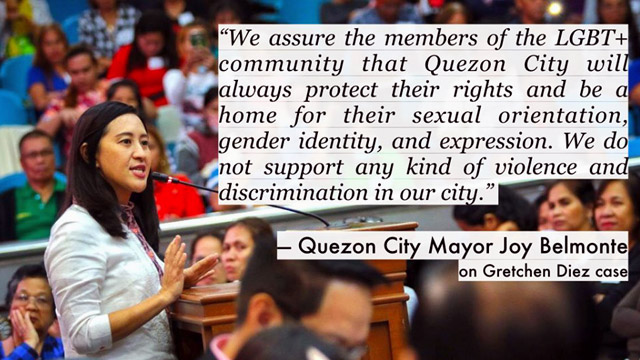 The incident in "Gender Fair" Quezon City has prompted a reignited call for equality.

(SPOT.ph) Calls for equality have been renewed after a recent incident involving Gretchen Custodio Diez, a transgender woman who tried to use a ladies' room at a mall. Diez was detained at the Quezon City Police District Station 7 on the night of August 13 after lining up to use the women's restroom at Farmers Plaza Mall. She was eventually released, but not before her plight reignited several discussions on LGBTQ+ rights and the demand for the passage of the Sexual Orientation, Gender Identity and Expression Equality Bill.

Quezon City Mayor Joy Belmonte has issued a statement condemning the incident, which she said went against the city's Gender Fair Ordinance. Established in 2014, the ordinance prohibits disrimination based on sexual orientation, gender identity and expression (SOGIE). "Quezon City will always protect [LGBTQ+] rights and be a home for their sexual orientation, gender identity, and expression. We do not support any kind of violence and discrimination in our city," wrote Belmonte.

The mayor also called out the mall for not establishing "All-Gender Toilets," as mandated by the ordinance. She asked the Business Permit and Licensing Department to ensure that all establishments, including government, private, and commercial, follow this rule.

The discrimination against Diez rekindled calls for the passage of the SOGIE bill, which as a law, will prohibit discrimination based on sexual orientation and expression on a national level. People all over the Internet have joined the call, saying that this was not an isolated case and that the SOGIE bill is long overdue.

We contacted Metro Manila's biggest mall developers for comment on their gender-neutral bathroom policies and will update this article upon their reply.