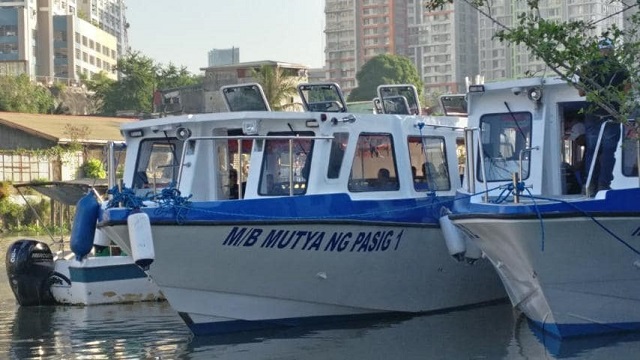 Plus, there are two new boats!

(SPOT.ph) If you've finally completely, absolutely, a hundred percent had it with the traffic on Metro Manila's roads, then why not give our Pasig River Ferry a chance? The ferry system was just relaunched on December 9 with two new 57-seater boats, aptly named "Mutya ng Pasig" 1 and 2, and for even better news, the ferry will be free for commuters until January 31, 2020.

The ferry system now has a total of seven boats, including the two new 57-seater ones. There are three boats that can seat 36 passengers each and two more that can carry 16 each. Seats are given on a first-come-first-served basis, but you can catch a free ride on any of these boats along the 11 stations of the Pasig River.

Check out the Pasig River Ferry stations below:

Each station also has a restroom and free WiFi, according to a statement by the Metropolitan Manila Development Authority. They've also put in CCTVs and had personnel undergo refresher courses for the relaunching of the ferry system.

Additionally, there are plans to add stations at three locations: Quinta Market in Manila, Circuit Makati in Makati City, and Kalawaan in Pasig City.

"[Commuters] can enjoy ferry rides between Pasig City and Manila City for free until the end of January," said Danilo Lim, chair of the Metropolitan Manila Development Authority (MMDA). "Na-launch na noon, mayroong pagkukulang, so this time may renewed efforts to relaunch this," he was also quoted as saying in a report by the Philippine News Agency.

No news yet on how much the fare will eventually be, but the original launch in 2014 pegged prices at P30 to P50. Fingers crossed the relaunched ferry system is here to stay!

Adventurer Savvy Seasoned Pasig River Ferry Service Commute City Life Government Mmda Metropolitan Manila Development Authority
Your Guide to Thriving in This Strange New World
Staying
In? What to watch, what to eat, and where to shop from home
OR
Heading
Out? What you need to know to stay safe when heading out